Giving Thanks for Scientific Advances and COVID-19 Relief 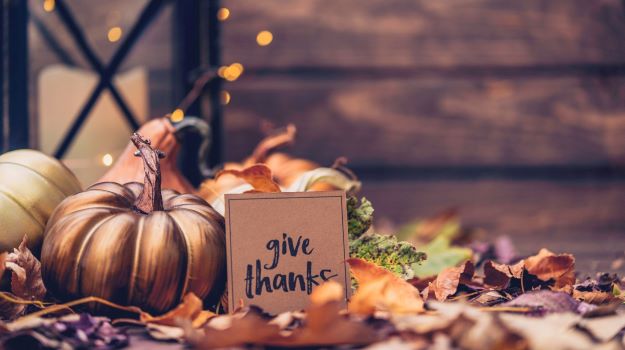 With the Thanksgiving holiday upon us, BioSpace felt it was important to give thanks for some of the positive things that have happened this year. And there are many! The accomplishments, opportunities and possibilities the scientific community has brought to bear, providing a way out of the COVID-19 pandemic and hope for the future of meaningful therapies for several challenging diseases, deserve a major shout-out.

Here are 10 things we are thankful for this year:

1.  The life sciences community. First and foremost, we want to thank our frontline heroes: healthcare workers. Doctors, nurses and paramedics, exhausted and emotionally drained by the worst healthcare crisis in a generation, deserve our heartfelt thanks. Not to mention the researchers who have worked tirelessly in pursuit of COVID-19 vaccines and therapeutics. The need to work together was never more clear than during the early days of the pandemic – and industry, government and academia responded. Research and data have been compiled and shared on preprint servers and between countries at an unprecedented pace. Public-private partnerships have been highlighted. Emory University came together with Ridgeback Biotherapeutics for the early development of the drug that would become molnupiravir. Merck & Co. then took it the last yard, and the promising COVID-19 antiviral could be available before the end of the year. Biopharma companies have also embraced the new hybrid workforce, with many offering more remote opportunities and enhanced wellness benefits.

2. The possibilities of mRNA. The COVID-19 vaccines developed by Moderna and Pfizer-BioNTech provided robust proof of concept for mRNA technology. Now, its possible applications are plentiful and extend beyond vaccines into therapeutics and even diagnostics. BioNTech’s pipeline includes an mRNA therapeutic to treat metastatic melanoma and other solid tumors, along with an mRNA flu vaccine. Moderna’s pipeline boasts an experimental treatment for methylmalonic acidemia (MMA), and the company recently launched human trials for an mRNA-based HIV vaccine. They’re not the only ones taking advantage of this newly popular technology, though. Swiss-based Novigenix SA is developing a blood test for colon cancer that uses the patient’s immune cell mRNA signatures.

3. Justice. Just like in any other industry, there will always be individuals who try to cheat the system and take shortcuts for personal gain in the biopharma industry. Fortunately, in several cases, justice is served. There has been plenty of legal buzz in the life sciences industry throughout the year, although a few specific cases have garnered more attention than others. For example, the long-awaited trial of Theranos founder Elizabeth Holmes began in September and continues to unfold as the end of the year draws near. “Pharma Bro” Martin Shkreli also continues to make headlines years after being found guilty of securities fraud and conspiracy to commit conspiracy fraud. Most recently, Shkreli has been facing an uphill battle against antitrust charges.

4. Advancements in Alzheimer’s Treatments. The first Alzheimer’s drug approved by the FDA in 18 years, Biogen’s Aduhelm (aducanumab) has offered a ray of hope in the treatment landscape. Just weeks later, Eli Lilly was granted FDA Breakthrough Designation for its antibody agent donanemab based on Phase II results. Lilly plans to submit a marketing application by the end of 2021. Meanwhile, companies such as Vaxxinity and Nuravax are targeting the believed root causes of Alzheimer’s with experimental vaccines. Vaxxinity’s UB-311, which targets toxic forms of aggregated amyloid-beta (Aβ) in the brain, has demonstrated high immunogenicity with a high responder rate, and Nuravax is developing a vaccine to induce therapeutically potent concentrations of antibodies against both amyloid and tau.

5. Job Expansions. As a whole, the life sciences industry has remained fairly steady in job additions despite the ongoing pandemic. That could be attributed to the fact that there is a constant need for innovation and research for life-saving therapies and drugs. Life sciences companies have been announcing job creations, both big and small, throughout the year. FUJIFILM Diosynth Biotechnologies, Catalent and Michael Reese Hospital all had large job expansion announcements, with a planned 725, 500, 600, and 20,000 new hires, respectively. Some of the smaller - but just as mighty – job expansion announcements this year have come from High Purity New England, Pantheon Biologics and Numed Pharma.

6. COVID-19 Advances. While the pandemic trudges stubbornly on, we are in much better shape than we might have been without the three vaccines authorized for use in the U.S. within 13 months of the country shutting down due to the virus. Pfizer and BioNTech’s Comirnaty® has since received full approval. According to the Wellcome Trust, the average research and development time for a vaccine is two to five years. Several effective therapeutics have also helped many people get through a COVID-19 infection. Regeneron’s antibody cocktail REGEN-COV, Gilead’s antiviral remdesivir and Genentech (Roche)’s interleukin-6 (IL-6) receptor antagonist Actemra®/RoActemra® (toclizumab) have all played important roles.

7. The Emergence of New Life Sciences Hubs. While biotech hubs like Genetown (Massachusetts) and Biotech Bay (San Francisco and Northern California) remain hot, exciting new companies are emerging in other parts of the country as well. Colorado and Washington State both have new companies planting their roots in their states, bringing high-paying jobs and commerce along with them. Texas, specifically the Dallas-Fort Worth area,  North Carolina and Philadelphia have also been seeing an influx of startups and existing companies flocking to their areas.

8. Gene Therapy Breakthroughs. It’s been a year of firsts, and quick follow-up acts, in the gene therapy and gene editing space. Intellia Therapeutics and partner Regeneron became the first to successfully edit genes inside the human body (in vivo) at the end of June. Editas Medicine followed suit in September, demonstrating productive in vivo gene editing for a form of inherited blindness called Leber congenital amaurosis type 10 (LCA10). Not to be outdone, LogicBio Therapeutics in October announced clinical trial results demonstrating the first-ever in vivo, nuclease-free genome editing in children.

9. Leaders Who Have Made (or Could Make) a Difference. Life sciences executives play important roles in shaping the companies and organizations they lead and driving innovation. Although the industry saw many key retirements this year, including Biogen's R&D head, Johnson and Johnson’s CEO, Pfizer’s longtime CFO, and Merck’s CEO – who was named 2021’s CEO of the year - there are others moving into new roles that have big shoes to fill. The National Institutes of Health and the U.S. Food and Drug Administration will also both have fresh faces leading the way in 2022. With a wave of new leaders, the life sciences industry is sure to see some exciting things happen in the new year.

10. What’s to Come. 2021 has not disappointed when it comes to emerging fields and companies launching within them. Proteomics and protein therapeutics are having a big year, with companies like Somalogic and Eikon Therapeutics. Gene therapy continues to excite with new players such as Capdisa Biotherapeutics and Dyno Therapeutics. Then there are new companies advancing new fields, such as Orna Therapeutics, which introduced the biotech world to circular RNA in February. Real-World Evidence took a major step forward as the COVID-19 vaccines and therapeutics required us to heavily rely on it for guidance. Patients in several areas have also gained new options. Very soon, new drugs could be available to treat hereditary transthyretin-mediated (hATTR) amyloidosis, major depressive disorder (MDD) and postpartum depression (PPD), Helicobacter pylori (H. pylori) infection and opioid overdose.