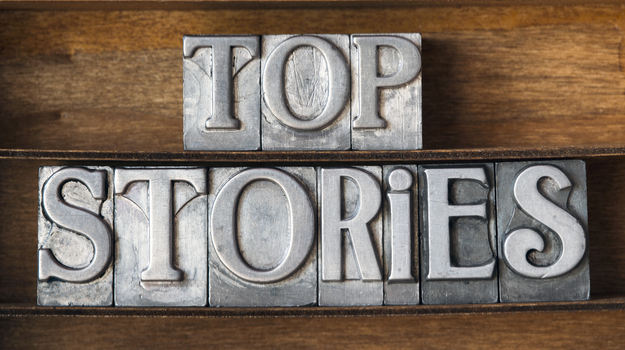 As we look back over the year, we noticed some stories just grabbed readers more than others. Here’s a look at the top 10 stories of the year.

#10. Genentech Cuts 223 Jobs at its Bay Area HQ. On August 16, Genentech announced it was slashing 223 jobs at its headquarters in South San Francisco. The layoffs were to go into effect on Aug. 31. Specific reasons for the cuts weren’t really described other than the layoffs followed a “business evaluation” and were expected to be completed by the end of November.

#9. Drum Roll, Please! Top 10 Bestselling Drugs in the U.S. Although total worldwide prescription drug revenue is projected to reach $811 billion this year, the total revenue created by the top 20 drugs in the U.S. in 2017 alone was $135 billion. Some of the top drugs were AbbVie’s Humira; Regeneron and Sanofi’s Eylea; Celgene’s Revlimid; Biogen and Roche’s Rituxan; and Teva Pharmaceutical and Pfizer’s Enbrel.

#8. Top 3 Takeover Targets for Pfizer. Readers love to gaze into crystal balls to predict the future, even if those crystal balls are cloudy. Analysts are always making predictions about mergers and acquisitions, and sometimes they’re right. Not so much this time. The top acquisition targets for Pfizer were Biogen, Bristol-Myers Squibb and Allergan, all still freestanding companies.

#7. Theranos’ Elizabeth Holmes Charged with Fraud. The Theranos saga included more than a single story, but this particular one ranked number 7. After several years of following the dramatic story of Elizabeth Holmes, founder of Theranos, and the accusations against her and former company president Sunny Balwani of massive fraud, Holmes was charged with fraud in March 2018. The SEC complaints alleged that Holmes and Balwani made false and misleading statements during investor presentations and product demonstrations. In September, Theranos closed its doors for good.

#6. Top 20 Life Science Startups to Watch in 2018. Every year, BioSpace analyzes biotech companies that launched in the last 18 months, apply a set of algorithms to key data, including finance, collaborations, pipeline, and innovation, to choose the Top 20 Life Science Startups to Watch. At the beginning of 2018, BioSpace published their “Class of 2018,” with the top spots going to BlueRock Therapeutics, Prelude Fertility, Relay Therapeutics, Freenome,and Cirius Therapeutics.

#5. FDA Stuns Celgene With Refusal to File Letter for MS Treatment Ozanimod. In what turned out to be a huge embarrassment for Celgene, and a surprise to most industry watchers, the U.S. Food and Drug Administration (FDA) issued a Refusal to File letter to Celgene for its New Drug Application (NDA) for multiple sclerosis treatment ozanimod. What was most surprising was that a company with the size and experience of Celgene would have submitted an NDA that wasn’t complete enough to even be evaluated. Eventually, in June, the company admitted it made a mistake, although they essentially threw their Receptos subsidiary under the bus in the process. The company expects to file a second NDA in the first quarter of 2019.

#4. Off-Label Use of Non-Opioids for Pain Appear to Rise in Response to Opioid Crisis. The opioid crisis and the Trump administration’s often fumbling attempts to address it received quite a bit of coverage in 2018. However, in November, reports came out that, partly as a result of government crackdowns on opioid use, physicians were increasingly using non-opioid therapeutics off-label in response. One example that was published described the use of Pfizer’s Depo-Medrol, an anti-inflammatory, being given in ways that were off-label and resulted in hundreds of complaints about injuries and complications from the injections.

#3. NEJM Retracts Another Article Associated With Piero Anversa, Investigates Two More. There were several incidences this year of high-profile retractions, but the story that drew the most attention was about the New England Journal of Medicine retracting several papers about human lung stem cells. An investigation found that images used in the article had been manipulated. The stem cell article came from a lab affiliated with Harvard Medical School and Brigham and Women's Hospital. The lab was headed by Piero Anversa, a pioneer in cardiovascular research and a proponent of cardiac stem cells. Eventually, the two universities called for a retraction of 31 articles from various journals.

#2. Another Biotech Conference, Another Party Involving Half-Naked Women Covered in Corporate Logos. This is yet another story that had multiple stories that also harkened back to similar stories from 2016 about the J.P. Morgan Healthcare Conference. At that meeting, some of the organizers of a party hired young women wearing skimpy dresses to mingle with the crowd. In this case, it was the annual Party at Bio Not Associated with Bio (PABNAB) in Boston in 2018 which featured topless dancers covered in body paint. The party had been criticized as “tone-deaf and lacking awareness” after widespread concern over gender equality throughout the biopharma industry.

#1. At Last: Eli Lilly Publishes Data for Catastrophic Alzheimer’s Trial. Sadly, 2018 marked quite a number of Alzheimer’s clinical trial failures. But BioSpace’s most popular story involved Eli Lilly’s release of data from a failed Phase III Alzheimer’s trial of solanezumab. The original trial failure was announced in 2016, but Lilly held out hope that an analysis of subgroups of patients, especially those in the earliest stages of the disease, might salvage the trial and the drug. However, as published in the New England Journal of Medicine, the drug failed to reach significance in effectiveness.

The story quite likely garnered interest in part because many critics and analysts believe it was the final nail in the coffin for the beta-amyloid theory of Alzheimer’s. It wasn’t, not by a longshot. Beta-amyloid plaques appear early in Alzheimer’s disease, and in fact, are found to appear 10 to 15 years before signs of the disease appear. Later in the disease, tangles of tau proteins are found.

Many drugs in current trials focus on preventing, halting or clearing accumulation of beta-amyloid tangles. Although many of these drugs appear successful at doing this, trials have not shown significant improvements in cognition or memory. This has led some critics to say the beta-amyloid theory is dead. However, many in the field, compare beta-amyloid to a match that eventually sets off a cascade of “brushfire” events, including neuro-inflammation, that cause damage to the brain.

This has led many companies to focus on earlier and earlier in the disease process, as well as to try other approaches.

Here's to another great year, and thanks for being a loyal BioSpace reader! See you in 2019.