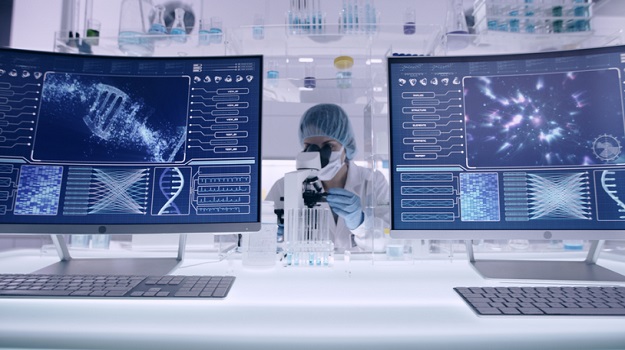 It was a very busy week for clinical trial news, with much of it coming out of the American Association of Cancer Research (AACR) Annual Meeting. Read on for details.

Veru announced positive efficacy and safety results from a planned interim analysis of its Phase III COVID-19 trial of oral sabizabulin in hospitalized COVID-19 patients at high risk for ARDS. It was recommended that the trial be halted early due to efficacy.

Ocugen reported the FDA had placed its Phase II/III immuno-bridging and broadening the study of Covaxin, OCU-002, on clinical hold. The company had voluntarily implemented a temporary pause on dosing following the statements made by WHO after an inspection of Bharat Biotech International's manufacturing facility. Covaxin is a vaccine against COVID-19

BioCardia reported the FDA approved its IND for BCDA-04, a proprietary allogeneic mesenchymal cell population that is Neurokinin-1 receptor-positive. It plans to initiate its Phase I/II trial in COVID-19 adults recovering from ARDS in the third quarter.

Pfizer and BioNTech announced positive results from a Phase II/III trial of a 10-microgram booster (third) shot of their COVID-19 vaccine in healthy children ages 5 through 11. The data demonstrated an increase in neutralizing titers against the Omicron variant and wild-type strain after the vaccine compared to two doses.

BioNTech presented data from its ongoing first-in-human Phase I/II trial of its CAR-T cell therapy, BNT211, in patients with advanced solid tumors. BNT211 is made up of two drug products, an autologous CAR-T cell therapy that targets the oncofetal antigen Claudin-6 (CLDN6) and a CLDN6-encoding CAR-T cell amplifying RNA vaccine (CARVac), which leverages BioNTech's mRNA-lipoplex technology. The presentation Haanen gave included data from 16 patients who received the therapy, some with just the CLDN6 CAR-T and some combined with CARVac. The tumor indications included testicular cancer, ovarian cancer, endometrial cancer, fallopian tube cancer, sarcoma, and gastric cancer. Both cohorts showed the therapy was well tolerated and demonstrated encouraging indications of clinical activity. Some cytokine release syndrome was observed, but were manageable. There were mild indications of pancreatic toxicity.

Purple Biotech presented favorable interim safety and efficacy data from its Phase Ib trial of CM24 in multiple solid tumors. CM24 is a humanized monoclonal antibody that blocks CEACAM1, a novel immune checkpoint protein that supports tumor immune evasion and survival by leveraging multiple pathways. The drug is being evaluated in combination with Bristol Myers Squibb's anti-PD-1 checkpoint inhibitor Opdivo (nivolumab). The trial's primary objective is safety, tolerability, PK, and determining the appropriate dose for the Phase II trial. No dose-limiting events were observed across all dose levels. To date, the best overall response included one confirmed partial response (PR) in a pancreatic cancer patient and three with disease control rate of 36%, two with pancreatic cancer and one with papillary thyroid cancer.

Affimed provided a data update on the ongoing Phase I/II trial of AFM13 precomplexed with cord blood-derived natural killer (cbNK) cells. The trial is being run at The University of Texas MD Anderson Cancer Center in patients with CD30-positive relapsed or refractory Hodgkin and non-Hodgkin lymphomas. The data demonstrated a 100% objective response rate (ORR) and an improvement of complete response (CR) rate to 62% at the recommended Phase II dose in 13 patients after two cycles of therapy. The treatment was well tolerated, with no cases of cytokine release syndrome, immune effector cell-associated neurotoxicity or graft versus host disease.

Novartis announced new long-term data from the Phase III ASCLEPIOS I/II trial and the ALITHIOS open-label extension that demonstrated long-term efficacy and safety of Kesimpta (ofatumumab) for people living with relapsing multiple sclerosis following up to four years of treatment.

Deinove announced the second part of its Phase II trial of DNV3837 in Clostridioides difficile infections being run in Canada had been approved by the Canadian Health authority. DNV3837 is a prodrug of the DNV3681 molecule, a narrow-spectrum, hybrid oxazolidinone-quinolone synthetic antibiotic targeting only Gram-positive bacteria.

Curis announced the FDA had placed a partial clinical hold on its Phase I/II TakeAim trial of emavusertib, an IRAK4 kinase inhibitor, for B-cell malignant lymphomas. Patients currently in the study can continue treatment at 300mg or lower if they show improvement, but they cannot enroll more patients over safety concerns, especially rhabdomyolysis.

Sutro Biopharma presented Phase I data demonstrating STRO-002 kills cancer cells and elicits immunogenic cell death. The Phase I trial is in ovarian and endometrial cancer. It is a fully targeting antibody-drug conjugate (ADC) that binds to the folate receptor alpha antigen specific to tumors.

Takeda Pharmaceutical announced positive results from the Phase III SHP643-301 trial of Takhzyro (lanadelumab) in kids ages two to <12 years with hereditary angioedema (HAE). The drug is already approved for HAE in people 12 years and older. Takhzyro is a fully human monoclonal antibody engineered to bind and decrease plasma kallikrein.

Novartis presented promising early clinical data for its JDQ443, a KRASG12C inhibitor, from its ongoing Phase Ib trial. Novartis' data from the KontRASt-01 trial demonstrated that JDQ443 had anti-tumor activity, high systemic exposure at the recommended dose, and a favorable safety profile. KRAS mutations are the most common cancer drivers in NSCLC, which is the most common form of lung cancer.

Aeglea Biotherapeutics announced Phase III data for pegzilarginase for arginase 1 deficiency. The company reported it had submitted its first-ever BLA to the FDA for the drug. Pegzilarginase is a recombinant human arginase 1 enzyme that degrades arginine amino acids.

Gilead Sciences reported the FDA had lifted the clinical hold on its studies of magrolimab. The partial clinical hold had been issued on all trials that evaluated magrolimab in combination with azacytidine after serious adverse events were reported. The drug combo is being evaluated in two Phase III trials for acute myeloid leukemia and three for myelodysplastic syndrome. Magrolimab is a monoclonal antibody against CD57 and a macrophage checkpoint inhibitor.

Eli Lilly shared positive new data from trials of lebrikizumab with topical corticosteroids for moderate-to-severe atopic dermatitis (AD). Lebikizumab is an IL-13 inhibitor. In the study, 41% of patients receiving the drug demonstrated clear or almost clear skin at the end of 16 weeks compared to 22% in the placebo group.

Blue Earth Therapeutics announced the FDA had cleared its IND for 177Lu-rhPSMA-10.1. It expects to launch a Phase I/II trial to evaluate it in men with metastatic castrate-resistant prostate cancer.

AbbVie shared results from the Phase II REFINE trial of navitoclax alongside Novartis and Incyte's JAK inhibitor Jakafi (ruxolitinib) in patients with myelofibrosis who did not respond well to Jakafi alone. This was a dose-ranging study with 32 evaluable patients. Of them, 38% demonstrated improvement in bone marrow fibrosis of at least one grade. Navitoclax also hit a 20% reduction in driver gene variant allele frequency (VAF), a potential biomarker for cancer. This data is not yet mature to determine if the drug is having an impact on survival. However, the median overall survival (OS) for the patients receiving navitoclax was 28.5 months.

Trishula Therapeutics presented promising early Phase Ib trial data of TTX-030 in combination with an investigational anti-PD-1 antibody, budigalimab, and FOLFOX chemotherapy for first-line treatment of patients with locally advanced/metastatic HER2-negative gastric or gastroesophageal junction cancer. The drug combination was generally well-tolerated and demonstrated encouraging anti-tumor signals. TTX-030 is a first-in-class, anti-CD39 antibody it is developing with AbbVie. Budigalimab is being developed by AbbVie.

Oncternal Therapeutics announced it has deprioritized further development of ONCT-216 to refocus efforts on zilovertamab, its anti-ROR1 monoclonal antibody and its Phase III trial it expects to launch in the third quarter. The company discontinued enrollment in the Phase I/II trial of ONCT-216 in r/r Ewing sarcoma.

Phosplatin Therapeutics dosed the first patient in a Phase II trial of PT-112 in recurrent thymic epithelial tumors (TETs), specifically thymoma and thymic carcinoma. PT-112 is a small molecule conjugate of pyrophosphate in oncology and has a unique pleiotropic mechanism of action that promotes immunogenic cell death through the release of damage associated molecular patterns (DAMPs) that bind to dendritic cells and lead to downstream immune effector cell recruitment in the tumor microenvironment.

Lineage Cell Therapeutics announced that Cancer Research UK had completed patient enrollment in the ongoing Phase I trial of VAC2, an allogeneic cancer vaccine. It is being evaluated for non-small cell lung cancer (NSCLC).

SOTIO Biotech announced interim results from the ongoing Phase I/Ib AURELIO-03 rial of SOT101 in combination with Merck's Keytruda in advanced/metastatic solid tumors. The drug is an IL-15 superagonist. The drug was well tolerated, and the majority of patients had clinical benefits.

IO Biotech dosed the first patient in its Phase II trial of IO102-IO103 in combination with Merck's Keytruda as a first-line treatment for metastatic non-small cell lung cancer. The drug targets the immunosuppressive mechanisms mediated by IDO and PD-L1.

Galectin Therapeutics reported positive outcomes from its first meeting of the data and safety monitoring board for its Phase IIb/III NAVIGATE trial of belapectin in patients with liver cirrhosis caused by non-alcoholic steatohepatitis (NASH). Belapectin is a complex carbohydrate drug targeting galectin-3.

Lexaria Biosciences announced that all data analyses from its simulated pulmonary hypertension clinical trial of HYPER-H21-3 have been successfully completed with positive safety and efficacy findings. The study used a placebo-controlled and double-blinded design, with administration of a single 300-mg dose of a specific DehydraTECH-2.0 CBD formulation compared to a placebo in a target group of sixteen volunteers. They were subjected to a 30-minute rest after dosing, where they breathed normal air (21% oxygen) followed by 40 minutes of simulated hypoxia (12%) oxygen induced to safely simulate robust hypoxic pulmonary vasoconstriction and an acute state of pulmonary hypertension.

Exelixis initiated the dose-escalation stage of its Phase I trial of XL114 as monotherapy in non-Hodgkin's lymphoma patients who received previous standard treatments. The drug inhibits the CARD11-BCL10-MALT1 complex.

Surface Oncology initiated two Phase II trials of SRF388, a potential first-in-class antibody against IL-27. One is a Phase II trial of the drug with Roche's atezolizumab and bevacizumab in treatment-naïve hepatocellular carcinoma (HCC). The other is a Phase II monotherapy trial in previously treated non-small-cell lung cancer (NSCLC).

AngioDynamics treated the first patients in the PRESERVE Clinical Study of the company's NanoKnife System for ablation of prostate tissue as a focal therapy option for prostate cancer patients. The study is in partnership with the Society of Urologic Oncology Clinical Trials Consortium (SUO-CTC). The NanoKnife System uses Irreversible Electroporation technology to destroy targeted cells using high-voltage pulses. The company also launched a new study to assess the use of its Auryon Atherectomy System for the treatment of calcified lesions in below-the-knee (BTK) arteries. It will be conducted by the Midwest Cardiovascular Research Foundation.

TauRx Pharmaceuticals treated the last patient in the blinded phase of their Phase III trial of Hydromethylthionine mesylate (HMTM) to treat tau-based Alzheimer's disease. They expect topline results in May.