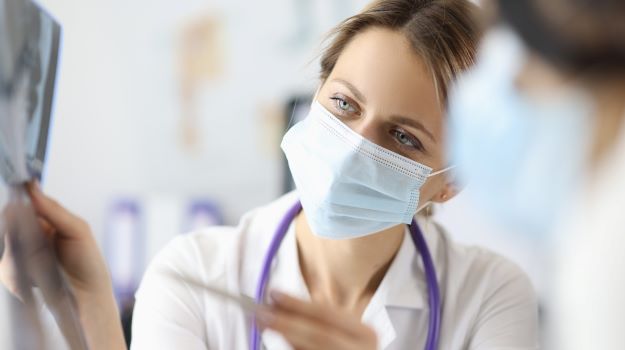 The first week of November was marked by numerous clinical trial announcements. Here’s a look.

Todos Medical announced it was adding the Hillel Yaffe Medical Center as the second clinical trial site in Hadera, Israel for its ongoing Tollovir Phase II trial for hospitalized COVID-19 patients. Tollovir is an oral 3CL Protease antiviral/anti-cytokine therapeutic that blocks the 3CL Protease. The first site was the Shaare Zedek Medical Center in Jerusalem.

Histogen and Amerimmune presented data from the Phase I trial of emricasan in mild symptomatic COVID-19. It had excellent safety and shortened clinical symptoms and speeded recovery compared to the placebo group. Emricasan is a potential first-in-class, oral pan-caspase inhibitor.

NRx Pharmaceuticals provided new safety update on Zyesami (aviptadil) in the ACTIV-3b Critical Care Phase III trial by the NIH for life-threatening COVID-19. They found it was safe to administer to patients with critical COVID-19 who have no other therapeutic alternative. The trial is testing Zyesami and Gilead Sciences’ Veklury (remdesivir) alone and in combination in hospitalized COVID-19 patients with acute respiratory failure who require high-flow supplemental oxygen, mechanical ventilation, or extracorporeal membrane oxygenation.

Pfizer announced it was halting its Phase II/III trial of Paxlovid, an antiviral against COVID-19. The drug reduced the risk of hospitalization or death by 89% compared to placebo in high-risk adults who were not hospitalized for treatment. They plan to file for an EUA as soon as possible. The drug is a SARS-CoV-2 protease inhibitor that blocks the 3CL protease.

Calithera Biosciences shared interim safety and efficacy results from its Phase Ib study of CB-280 for adults with cystic fibrosis. CB-280 is an arginase inhibitor. It demonstrated linear pharmacokinetics with plasma exposure increasing proportionally with dose, and complete and continuous target inhibition in plasma was hit at the 100 mg dose and above.

Ribus Pharmaceuticals announced positive results from both single and multiple ascending dose portions of its Phase I trial of HU6 for multiple cardio-metabolic diseases. HU6 is a first-in-class, oral Controlled Metabolic Accelerator (CMA) therapy. It demonstrated robust and sustained target engagement with no obvious safety signals.

Ikena Oncology received the go-ahead from the FDA for a clinical trial of IK-930 for cancers harboring genetic mutations in the Hippo signaling pathway. IK-930 selectively binds TEAD and disrupts TEAD-dependent transcription of key genes involved in cancer progression, metastases, and therapeutic resistance.

Acumen Pharmaceuticals presented the clinical trial framework of ACU193. ACU193 is a monoclonal antibody that selectively targets toxic soluble amyloid-beta oligomers for treatment of early Alzheimer’s. The presentation was the rationale for targeting that site and the clinical trial design of the Phase I INTERCEPT-AD trial.

Metacrine reported topline results from its Phase IIa study of MET409 with Jardiance (empagliflozin) in type 2 diabetes and non-alcoholic steatohepatitis (NASH). MET409 is a farnesoid X receptor agonist. Jardiance is a sodium-glucose cotransport-2 inhibitor. The trial had favorable safety profiles. It has halted future development of its FX program in NASH and is prioritizing clinical development of MET642 into a Phase II trial in inflammatory bowel disease.

uniQure announced a positive recommendation by the independent Data Safety Monitoring Board (DSMB) in the higher-dose cohort of the Phase I/II trial of AMT-130 for Huntington’s disease. The final 12 patients in the second cohort are now cleared for enrollment.

The Ivy Brain Tumor Center at Barrow Neurological Institute, UC San Francisco and GlaxoSmithKline will run a Phase 0 clinical trial of Zejula (niraparib) in patients with newly diagnosed glioblastoma and recurrent glioma. Zejula is GSK’s oral, once-daily poly (ADP-ribose) polymerase (PARP) inhibitor. The trial will enroll up to 42 patients divided into two groups, Arm A for newly diagnosed glioblastoma patients, and Arm B for recurrent glioma patients with IDH mutation and ATRX loss. A Phase 0 trial is run in humans, but its purpose is to speed up and streamline the drug approval process. It uses only a few small doses of a drug in a smaller set of patients.

Nanospectra Biosciences completed enrollment in the pivotal trial of AuroLase Therapy for focal ablation of prostate tissue via nanoparticle directed near infrared irradiation. AuroLase is the first and only ultra-focal ablation therapy designed to maximize treatment efficacy while minimizing side effects associated with surgery, radiation and alternative focal therapies.

Rhythm Pharmaceuticals presented the first-ever data on the health-related quality of life (HRQOL) and experience of patients with Bardet-Biedl syndrome in its Phase III trial of setmelanotide. They also presented data from the Phase III trial of the drug in BBS and Alstrom syndrome and new hunger reduction data from the SRC1 and SH2B1 genetic deficiency cohorts in the Phase II Basket Trial. Semelanotide (Imcivree) is indicated for chronic weight management in adults and children six years of age and older with obesity due to proopiomelanocortin (POMC), proprotein convertase subtilisin/kexin type 1 (PCSK1), or leptin receptor (LEPR) deficiency.

7 Hills Pharma successfully completed its Phase I trial of 7HP349, which evaluated the drug in 60 healthy subjects. The drug is an immunostimulant being evaluated for its ability to improve immuno-oncology drugs, COVID-19 and influenza vaccines.

CytoDyn announced two separate stories about its drug leronlimab today, one for nonalcoholic steatohepatitis (NASH) and the other for metastatic triple-negative breast cancer (mTNBC). Leronlimab is a viral-entry inhibitor, binding to CCR5, protecting T-cells from viral infection. In the Phase II NASH study, CytoDyn reported preliminary findings from five patients receiving leronlimab. The data suggests the fatty deposits were decreased by as much as 45% in all five patients compared to baseline measurement. Fibrosis, or scarring, was decreased by as much as 10% in four of the five patients. For the breast cancer study, CytoDyn updated results on patients receiving leronlimab who had CCR5+ mTNBC who had failed at least two lines of previous therapy. The ongoing data analysis is from 28 pooled patients, 16 from the company’s Compassionate Use Study, 10 from a Phase Ib/II trial and two from the Basket Study. Three-quarters, or 75%, of the patients who showed a lower level of circulating cells after receiving leronlimab demonstrated a 3600% increase in 12-month overall survival (OS) compared to a 980% increase in OS reported by CytoDyn on August 25, 2021. The updated data also hints at a 580% increase in 12-month Progression Free Survival (PFS) compared to up to a 660% increase in PFS they reported on August 25.

Biogen presented data including more than 3,000 patients in Phase III clinical trials and about 1,7000 patients in the redosing trial, EMBARK, of Aduhelm. A late-breaking presentation covered new data from more than 7,000 plasma samples from the ADUHELM Phase III clinical trials that described the effect of the drug on plasma phosphorylated tau181 (p-Tau181) and how it correlates to amyloid beta plaques and disease progression. Amyloid beta and tau are abnormal proteins that aggregate in the brains of Alzheimer’s patients. They also presented results from more than 1,800 patients screened for the EMBARK re-dosing study with Aduhelm. This, they say will “shed light on the impact of stopping treatment in clinical trials.”

Avidity Biosciences dosed the first patients in the Phase I/II MARINA trial of AOC 1001 for myotonic dystrophy type 1 (DM1). AOC 1001 decreased levels of a disease-related mRNA called DMPK. The drug is a proprietary monoclonal antibody that binds to the transferrin receptor 1 (TfR1) conjugated with a siRNA targeting DMPK mRNA.

NerveGen presented additional Phase I data for NVG-291. The drug, a protein tyrosine phosphatase modulator is being developed for nervous system injury that can be the result of trauma or diseases, such as multiple sclerosis or Alzheimer’s. Following the Phase I trial, it hopes to run bridging studies in healthy males and healthy premenopausal females, then initiate a Phase Ib/IIa trial in Alzheimer’s disease. It hopes to initiate Phase Ib/II trials in spinal cord injury and MS in 2022.

Processa Pharmaceuticals announced that in its Phase Ib trial of its next generation capecitabinase dosage regimen (a combination of PCS6422 administered with capecitabine), the combination successfully inhibited dihydropyrimidine dehydrogenase (DPD), altering the metabolism of 5-FU at least during the first 24-48 hours after PCS6422 but not throughout the seven days of capecitabine dosing.  Capecitabine is a widely used chemotherapeutic, a prodrug of 5-FU that is converted to 5-FU through three metabolic steps. However, about 80% of 5-FU is broken down to non-cancer killing metabolites. Combining the drug with PCS6422 results in needing less capecitabine to cause cellular apoptosis and death.

Enlivex Therapeutics reported that its Phase II trial of Allocetra in pneumonia-associated sepsis had been authorized in Spain. Allocetra is being developed as a universal, off-the-shelf cell therapy to reprogram macrophages into their homeostatic state.

Eyenovia enrolled the first set of patients in its Phase III VISION-1 study of MicroLine for improving near vision in patients with presbyopia. MicroLine is a proprietary pilocarpine formulation delivered via the company’s Optejet dispenser.

Neurona Therapeutics got the go-ahead from the FDA to launch a Phase I/II trial of NRTX-1001 in drug-resistant mesial temporal lobe epilepsy (MTLE). NRTX-1001 is a regenerative neural cell therapy that might be able to repair hyperexcitable neural networks.

Talaris Therapeutics provided the first clinical update on its Phase III FREEDOM-1 study in living donor kidney transplant (LDTK) recipients, as well as a clinical update and additional data from ongoing follow-up of its fully-enrolled Phase II trial in LDKT recipients. The first two Phase III patients receiving FCR001 more than 12 months before the data cutoff were successfully weaned off all chronic immunosuppression without signs of rejection and with stable kidney function. In the Phase II patients, all 26 patients originally weaned off immunosuppression continued to stay off it without rejecting their donated kidney.

Vaccitech published results from the Phase I trial in the Middle East of the ChAdOx1 MERS vaccine candidate. The vaccine was generally well tolerated and induced robust antibody and T cell immune responses in healthy volunteers.

Codexis and Nestle Health Science dosed the first patient in a Phase I trial of CDX-7108. The drug is a lipase variant engineered to overcome the limitations of traditional pancreatic enzyme replacement therapy (PERT) deficiencies. PERT is the primary treatment for exocrine pancreatic insufficiency (EPI), a GI-tract condition caused by disease that impair pancreatic function, such as pancreatitis, pancreatic cancer, Crohn’s disease, celiac disease and cystic fibrosis.

Chinook Therapeutics presented data on its BION-1301 and atrasentan clinical programs. BION-1301 is a novel anti-APRIL monoclonal antibody in Phase I/II studies for patients with IgAN. Data was presented from Cohort 1 in Part 3 of the study. It was well-tolerated and durably reduced serum IgA and IgM levels, and to a lesser extent IgG levels. In a Phase I trial, atrasentan demonstrated consistent and predictable safety, tolerability and linear dose-proportionality in healthy Chinese, Japanese and North American adults of non-Asian descent.

Longeveron selected bioRASI as its CRO for its Phase II trial of Lomecel-B infusion in Alzheimer’s patients. Lomecel-B is derived from culture-expanded medicinal signaling cells sourced from the bone marrow of young, healthy adult donors.

Orchestra BioMed presented long-term clinical results and ISH subgroup data from the MODERATO II trial of BackBeat Cardiac Neuromodulation Therapy in patients with hypertension and an indication for a pacemaker. The results demonstrated a mean reduction of 17.5 mmHg in office systolic blood pressure in all BackBeat CNT treated patients who completed 24-month follow-up.

KemPharm presented data on serdexmethylphenidate/d-Methylphenidate capsules for children with ADHD. The trial hit the primary endpoint, showing greater improvements from baseline and the Swanson, Kotkin, Agler, M-Flynn, and Pelham Scale (SKAMP) with Azstarys versus placebo.

MagForce received the greenlight from the FDA to proceed with Stage 2B with the final protocol of the pivotal U.S. study for the focal ablation of prostate cancer with the NanoTherm therapy system for intermediate risk prostate cancer. Up to 100 patients are planned to be treated.

Calithera Biosciences terminated its Phase II KEAPSAKE trial based on lack of clinical benefit in an interim analysis. The study was evaluating telaglenastat plus standard-of-care chemoimmunotherapy as front-line therapy in patients with stage IV non-squamous non-small cell lung cancer (NSCLC) whose tumors have a KEAP1 or NRF2 mutation.