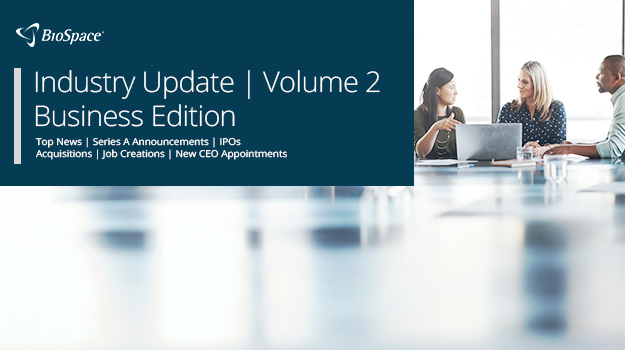 The life sciences is always a frenetic sector when it comes to mergers & acquisitions, initial public offerings (IPOs) and Series A announcements (not to mention B and C rounds). But during the second quarter of 2021, these companies were especially busy bees – all positive signs that the industry is still booming coming out of the COVID-19 pandemic.

With all of the activity, it would be impossible to go over every single transaction and announcement in detail, so here’s a glimpse at some of the real newsmakers. The rest can be found right here in BioSpace’s Industry Update: Vol. 2 Business Edition.

This space has been particularly busy the past two months. In June, AbbVie made good on its option to acquire strategic partner, Teneobio Inc. and its BCMA-targeting immunotherapeutic for relapsed or refractory multiple myeloma (R/R MM). AbbVie made the call following positive interim data from a phase I study of the compound, TNB-383B, which saw the drug achieve an objective response rate (ORR) of 79%, and a very good partial response rate of 63% at doses of at least 40 mgs.

Germany-based MorphoSys AG strengthened its position in the hematology-oncology space with the pick-up of clinical-stage biopharma company, Constellation pharmaceuticals. In the deal, which has a total value of $1.7 billion, MorphoSys added two mid-to-late stage assets, BET inhibitor, pelabresib (CPI-0610) and CPI-0209, a second-generation EZH2 inhibitor. Both have wide-ranging potential for patients with hematological and solid tumors.

It’s a SPAC parade again this year – and 2021 is still a long way from over. Ginkgo Bioworks led the way, going public through a massive deal with Soaring Eagle Acquisition Corp. that saw “the organism company” valued at $15 billion. Ginko uses genetic engineering to produce bacteria that has potential in a wide range of areas, including food and agriculture, antibiotics, vaccines, and therapeutics.

Less than a year after its official debut, Boston-based Valo Health hit the Nasdaq in June through a SPAC merger with Khosla Ventures Acquisition Co. Valo, which was founded by Flagship Pioneering, claimed a valuation of approximately $2.8 billion. The company’s Opal Computational Platform is designed to speed up the rate of drug discovery for cancer, neurodegenerative and cardiovascular diseases.

Popular genetic testing company, 23andMe also decided to skip the traditional route, entering into a deal with Sir Richard Branson’s VG Acquisition Corp. 23andMe began trading on the Nasdaq on June 17th, valued at $3.6 billion and trading under the ticker symbol “ME”. The company’s stock rose 21% on the first day of trading.

An impressive cadre of investors demonstrated their faith in ArriVent Biopharma, which launched in June with a whopping $150 million in Series A financing. The financing was led by Hillhouse Capital Group, and saw the Pennsylvania-based ArriVent receiving $90 million upfront to advance its potential best-in-class epidermal growth factor receptor tyrosine kinase inhibitor (EGFR TKI), furmonertinib. The lung cancer treatment, licensed from Allist Pharmaceuticals, was approved in March by China’s National Medical Products Administration (NMPA) for the treatment of locally advanced or metastatic non-small-cell lung cancer (NSCLC).

Mnemo Therapeutics now holds the record for France’s largest-ever Series A, raking in $90 million USD (€75 million) in a round led by Casdin Capital and Sofinnova Partners. The Paris-based biotech will use the funds to advance its proprietary EnfiniT platform which identifies a new class of antigens with greater tumor specificity. The broad group of technologies comprising the platform is collectively aimed at significantly improving persistence, sensitivity and T-cell memory.

It didn’t take long for Roger Perlmutter to emerge from stealth mode. After leaving his post as president of Merck Research Laboratories at the end of 2020, Perlmutter is back as the CEO of drug discovery startup Eikon Therapeutics, Inc., which officially debuted in May with $148 million in Series A financing. Eikon is using its super-resolution microscopy platform to track and measure the movement of individual proteins in living cells in order to gain a better understanding of disease biology. Perlmutter will be tasked with translating this novel technology into feasible therapeutics.

Speaking of leadership – and Merck – Timothy (Tim) Noyes, the new CEO of Aerovate Therapeutics, began his career at the German multinational. He will now lead the charge to develop lead compound, AV-101, an investigational anti-proliferative therapy for pulmonary arterial hypertension (PAH).

Bio North Texas Foundation (BioNTX), which represents the bioscience industry in 26 counties including Dallas and Fort Worth, has a new chief executive. Kathleen M. Otto, who brings experience from the north in New York and New Jersey, began her tenure on the first of June.

With all of this action, it might go without saying that this has been a promising quarter for job creation in the Life Sciences. With the 2019 and 2020 additions of cell and gene therapy companies, BlueRock Therapeutics and AskBio, Bayer is in growth mode. With the company’s ardent commitment to cornering this space and planned expansion at its Berkeley facility, Bayer expects to add 1000 new jobs. Meanwhile, the Bio Capital region continues to explode, with Australian diagnostic company, Ellume, establishing its first U.S.-based manufacturing site in Frederick County, Maryland. The new operation is expected to bring more than 1,500 new jobs to the state by the end of 2022.

For more in-depth insight on all of the action, click here to download a free copy of BioSpace’s Industry Update: Vol. 2 Business Edition.