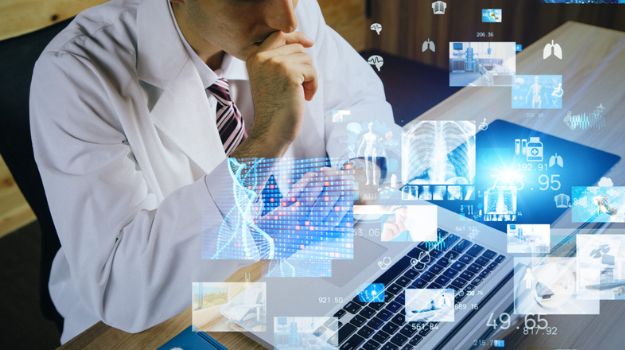 Artificial Intelligence (AI) is at the forefront of modern technology and has begun to parallel in the world of biotechnology. Many biopharma companies are using AI to drive innovation, enhance their processes and explore new business models.

Major drug discovery companies are realizing that AI has the potential to offer them critical business benefits. It can enable the analysis of massive databases, accelerate research and development, save costs and promote effective decision making.

Large companies including AstraZeneca, Pfizer and Johnson & Johnson have made great strides in integrating AI with genomics and engineering tools in pharmaceutical applications, as it helps improve target identification and validation.

Since an average new drug takes 10-15 years to reach the market, with half of that time spent in clinical trials, companies are using AI models to help accelerate clinical trials and perceive diseases more clearly. Suitable cases can also be identified faster and novel clinical study designs can be supported.

An early adopter of AI, AstraZeneca is using knowledge graphs and image analysis to gather new insights about diseases and identify biomarkers 30% faster than human pathologists.

In January, BenevolentAI announced that AstraZeneca had selected the first AI-generated drug target from their 2019 collaboration – a novel chronic kidney disease (CKD) target.

Pfizer, which is investing $120 million in biotechnology innovation through the Pfizer Breakthrough Growth Initiative, has effectively used AI to conduct COVID-19 vaccine trials and streamline distribution. The company drew on digital technologies and AI to roll out its vaccine to market in less than a year.

Pfizer has also been leveraging AI and predictive analytics to modernize, streamline and simplify the development of medicines.

In 2018, Pfizer inked a strategic research collaboration with XtalPi to develop a hybrid physics and AI-powered software platform for accurate molecular modeling of drug-like small molecules. XtalPi has developed software that uses AI to identify and model the most promising new drug compounds. Pfizer followed this in 2020 by teaming up with Rockville-based Insilico Medicine to mine data for drug targets.

Boston-based Real-World Data and AI company ConcertAI (formerly Concerto HealthAI) is cashing in on the pharma industry’s passion for the technology. In 2019, it signed a real-world oncology data collaboration with Pfizer, later expanding the deal to look at additional disease areas.

In August, ConcertAI revealed that it was expanding its partnership with Janssen Research & Development (Johnson & Johnson) to improve study design and diversify clinical trials with the aid of AI.

Janssen has also collaborated with Cambridge-based software solutions provider nference to apply AI in the identification and selection of new targets and disease subsets to aid therapeutic programs. Janssen will leverage the nference AI platform to create a unified data science-powered connective fabric across the Janssen R&D organization.

But these companies are not alone in claiming that drug discovery can be transformed by AI and turned from science fiction into reality. As AI-driven solutions have grown in popularity, there has been a growing number of partnerships between key biopharma companies and companies driven by AI.

The aim is simple: Enable the translation of innovative science into life-changing medicines.

Recently, Optellum, a lung-health AI company teamed up with the Lung Cancer Initiative at J&J in order to apply its AI-powered clinical decision support platform to transform early lung cancer treatment. The Optellum software achieved U.S. Food and Drug Administration (FDA) clearance in March 2021 and is already being implemented in clinical care by leading hospitals across the U.S. Optellum’s roadmap extends beyond lung cancer diagnosis and treatment to other deadly diseases of the lungs, including interstitial lung disease (ILD) and chronic obstructive pulmonary disease (COPD).

In an R&D deal inked at the start of the year, Boehringer Ingelheim is working with Google Quantum AI to leverage quantum computing to accelerate and optimize the discovery of future new medicines. The company has also has partnered with Insilico Medicine to use AI technology in identifying potential therapeutic targets.

AI is guiding pharma companies toward a new era of rapid innovation. AI-based drug discovery companies like Exscientia, with its offices in Oxford and Miami, are already cutting down on the time and cost of finding new drugs by using AI to model compounds to create new drugs.

Exscientia Chief Executive Officer Andrew Hopkins is of the opinion that his company’s specialized process can reduce the time spent in drug discovery from 4.5 years to as little as 12 months and reduce discovery costs by 80%. Hopkins should know. Recently, the $1.2 billion contract between BMS and Exscientia led to the selection of an AI-designed, immune-modulating drug candidate. Exscientia is set to receive $20 million for the exploration work.

Exscientia has a history of success. As a result of its collaboration with GSK, the firm developed the first-ever AI-powered treatment for COPD. The drug has progressed into human trials and shows promise.

Exscientia is also working with Roche, Sanofi and Bayer, among other big pharma players.

As AI helps generate insights, several companies are using it to broaden the sources of data used, helping move the molecule earlier into disease states.

In a paper published on AstraZeneca’s website, three executives write:

“Many diseases like liver, kidney and heart disease are driven by common mechanisms such as inflammation, yet we try and treat them all as separate entities. We’ve been hampered in the past by approaching the science in a very siloed way, just focusing on one specific organ or disease, when in fact these conditions are linked by common biology.”

AI is helping to analyze multiple complex datasets capturing detailed information about objects or concepts - such as genes, drugs, diseases or molecular pathways - and the relationships between them. It helps uncover novel insights and discover possible drug targets, as well as opportunities for repurposing existing drugs when exploring this vast interconnected data space.

From identifying new targets to recruiting for and designing better clinical trials, AI is driving personalized medicine strategies and speeding up the design and development of new drugs.

With the help of AI, predictions of small molecule binding are generated based on millions of experimental affinity measurements and thousands of protein structures.

AtomNet, a structure-based, deep convolutional neural network designed to predict the bioactivity of small molecules for drug discovery applications, helped Stanford University researchers to run 6.8 million small molecules through the tool to determine whether they targeted the protein Miro1, which is implicated in Parkinson's disease.

U.S. Leads the Way in AI for Drug Discovery

The U.S. is still firmly in the lead in terms of its proportion of AI for drug discovery companies, though the Asia-Pacific region has begun to aggressively increase its activity in the space in terms of investments into foreign companies (largely US-based companies).