Where Are They Now? Top 3 Biotech Startups From NextGen Bio 2016 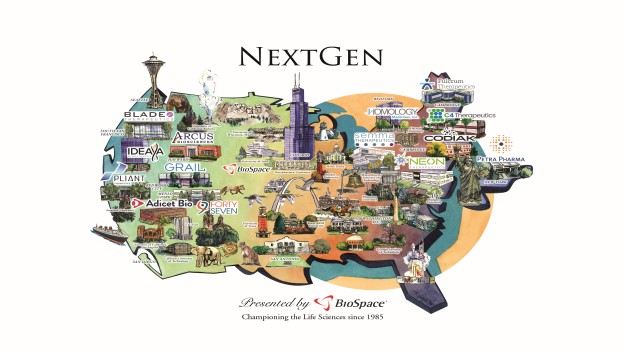 Every year, BioSpace analyzes the biotech industry, looking for the hot new biotech startups to watch. We then produce the NextGen Bio “Class of…,” twenty companies ranked based on several categories, including Finance, Collaborations, Pipeline, and Innovation. The companies were typically launched no more than 18 months before the list was created.

We thought it would be insightful to look back at our previous lists to see where some of those companies are today. Here’s a look at the top 3 companies from the Top 20 Life Science Startups to Watch in the U.S. from 2016.

#1. Corvus Pharmaceuticals. The top company on the list for 2016 was Burlingame, Calif.-based Corvus Pharma. The company launched in December 2014 with a $33.5 million Series A round led by OrbiMed Advisors. It followed up in September 2015 with a $75 million Series B financing.

Corvus launched its initial public offering (IPO) in March 2016 with an IPO price of $15 per share. Most recently, in November 2018, the company is continuing enrollment of up to 50 patients with renal cell cancer (RCC) in an amended Phase I/Ib clinical trial of CPI-444, the company’s lead product candidate, administered alone and in combination with Genentech’s Tecentriq (atezolizumab). It also has another Phase Ib/II trial of the drug in non-small cell lung cancer (NSCLC) as part of Genentech’s MORPHEUS platform.

Corvus also is enrolling up to 350 patients with advanced cancer in a Phase I/Ib clinical trial of CPI-006 as a single agent and in combination with CPI-444, and in combination with an anti-PD-1 agent. The company plans to submit an Investigational New Drug (IND) for CPI-818, the company’s interleukin-2-inducible kinase (ITK) inhibitor in early 2019.

At the company’s third-quarter financial report on November 1, 2018, Richard A. Miller, co-founder, president and chief executive officer, stated, “We are encouraged by the ongoing presentation of data related to both programs at medical meetings and in peer-reviewed journals. This includes biomarker data for CPI-444 that our team presented at the ESMO 2018 Congress on October 22, 2018. We are also looking forward to presenting additional new clinical and biomarker data for both programs at the SITC annual meeting on November 9 and 10, 2018. Our progress continues to demonstrate that we are a leader in designing and developing medicines that modulate the adenosine pathway and that have demonstrated efficacy as monotherapies and in combination with other agents.”

#2. NantCell. Second on the list in 2016 was Culver City, Calif.-based NantCell, a subsidiary of NantWorks. NantWorks is the umbrella company founded by Patrick Soon-Shiong, often dubbed the “world’s richest doctor.” NantCell raised $75 million in June 2015, and then in January 2016, raised another $57 million. Not much was known about the company at the time. Shortly after its launch in January 2015, it signed a deal with Amgen to develop and commercialize the pancreatic drug ganitumab (AMG 47), which had been in Phase III trials, but been abandoned by Amgen in 2012. Then, in May 2015, NantWorks acquired a subsidiary of Sorrento Therapeutics for more than $1.3 billion, picking up Cynviloq, a promising cancer drug.

NantWorks and any of its other companies are not the most transparent companies in the biopharma industry, with press releases and news rather difficult to find and navigate. However, in May 2017, NantCell and NantKwest reported that the Food and Drug Administration (FDA) authorized an IND for the NANT Cancer Vaccine for pancreatic cancer patients. NantCell focuses on immuno-oncology.

In July 2017, NantCell licensed CytRx Corporation’s aldoxorubicin for $13 million up front and $356 million in milestones. In June 2018, CytRx highlighted data from aldoxorubicin that was published in the journal Future Oncology for treatment of advanced soft tissue sarcoma. And in November 2018, CytRx presented data from the Phase Ib part of a Phase Ib/II clinical trial of NantCell’s high-affinity natural killer (hank) cell therapy in combination with anti-cancer agents, including aldoxorubicin, in patients with third-line or greater triple negative breast cancer, fourth-line or greater head and neck squamous cell carcinoma (HNSCC) or recurrent metastatic pancreatic cancer. The company presented two posters at the Society for Immunotherapy of Cancer’s (SITC) 33rd Annual Meeting.

#3. CRISPR Therapeutics. Based in Cambridge, Mass., CRISPR Therapeutics was one of the first companies created to exploit CRISPR gene editing technology. It launched with a $35 million Series A round followed by an $89 million Series A and B round. In October 2015, it signed a deal with Vertex Pharmaceuticals worth $105 million up front and $420 million in milestone and royalty payments for six possible in-licensed treatment.

After the FDA placed a clinical hold on it and Vertex’s IND for CYTX001 for sickle cell disease (SCD), it was lifted on October 10, 2018. The two companies had earlier announced they had received approvals for Clinical Trial Applications for the compound in multiple countries outside the U.S. for both beta-thalassemia and SCD. They expected to initiate a Phase I/II clinical trial in SCD by the end of 2018 and are enrolling patients with transfusion-dependent beta-thalassemia in a Phase I/II trial in Europe.

At its third-quarter financial report on November 7, 2018, Samarth Kulkarni, CRISPR’s chief executive officer, stated, “As we enter the fourth quarter, we are actively moving our programs forward and expanding our clinical development activities in sickle cell disease, beta-thalassemia and immuno-oncology.”