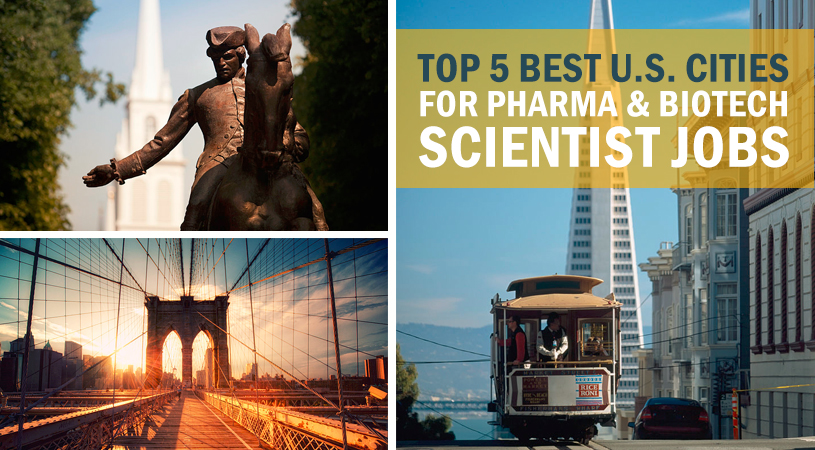 For a newly mortar-boarded PhD in the life sciences or a seasoned veteran of the pharma and biotech world, when searching for a new job, it’s a pretty basic notion to look for work where the jobs are.

And the jobs for scientists, research, clinical and others, happen to be clustered in five major areas we here at BioSpace often refer to as “hotbeds” or hubs. It should come as no surprise where the majority of the biotech and pharma jobs are located in the United States, but what may come as a surprise are some of the reasons these cities have become home to so many leading companies in the industry—including strong support from area academic institutions and quality of life amenities in the area.

That insight was highlighted in the recent 2016 Life Sciences Outlook Report published by the life science division of JLL, a professional services firm specializing in commercial real estate services. In its report, JLL said proximity to institutes of higher education is “crucial for life science firms” as it related to recruiting.

“Certainly those are things that play big roles in companies being able to draw top talent to these areas,” Will Zasadny, associate director of communications at California Life Sciences Association, an industry advocacy organization, told BioSpace.

According to the U.S. Bureau of Labor Statistics, five areas (based on 2015 statistics) in the U.S. stand out as top areas employing medical scientists who conduct research dealing with the understanding of human disease. Included in the BLS statistics are research scientists involved in the pharma and biotech industries, as well as academic institutions.

It’s no surprise that the Boston and Cambridge area leads the list as the hottest hub for biotech and pharma companies. The greater Boston area is home to about 86,000 life sciences employees and would be at the top of the list for prospective employees to job search. That means that nearly five of every 1,000 jobs in the area is for a medical scientist, with an annual mean wage for positions $89,470, according to the BLS. However it’s important to note this is a mean of all of the types of medical scientists’ salaries the BLS grouped together.

One reason the greater Boston area is becoming such a major hub in the biotech and pharmaceutical industries is the number of research universities in the area, including Harvard and MIT. Those institutions allow area employers to pick the cream of the crop of employees.

Boston also has one of the highest educated workforces in the nation. Stacie Rader, head of talent at Flagship Ventures, said the company has spent 20 years in working with the local academic institutions to develop a network for hiring potential top prospects into their startup companies or portfolio companies.

The Kendall Square area in Cambridge has become one of the hottest square mile pieces of real estate in the biotech industry, with multiple companies setting up lab space or sales offices in the area in order to take advantage of the research rich environment. Not only are smaller companies calling the Boston area home, but many larger and established pharmaceutical companies, such as Pfizer , GlaxoSmithKline , Takeda , Sanofi , Biogen and Novartis have big presences in the city. The close proximity of so many pharmaceutical and university laboratories provides researchers and scientists easy access to clinical studies and building partnerships between companies.

Because of the large number of companies in the area, Rader said it’s a buyer’s market when it comes to job seekers. For the first time in years, Rader said the “explosion of life sciences startups has opened up a lot of choices” for job seekers.

The New York and New Jersey area rank number two as far as employment of medical scientists, according to the BLS. Data shows that slightly less than one out of every 1,000 positions is a medical scientist, earning an annual mean wage of $89,490, about $20 higher than the Boston area.

One of the big drivers of growth in the area is the access to venture capital, as well as a strong supporting base of academic and research institutions. Companies such as Pfizer, Celgene and Merck all call the area home. Debbie Hart, executive director of BioNJ, a trade group for research-based life sciences companies, told BioSpace, the area has numerous amenities when it comes to recruiting, including strong school systems, cultural events and a lower cost of living, particularly in New Jersey. Geography also plays an important role as well. She said the companies are close to Wall Street, as well as a two-hour train ride from the FDA in Washington, D.C.

One benefit to recruiting in the New York and New Jersey areas, at least according to Andre Choulika, chief executive officer of Cellectis, is less competition. Earlier this year Paris-based Cellectis opened an office in New York and, while touting access to capital, other pharma companies and academic research, Choulika told Ft.com that it is easier to attract new talent in New York because there is less “cut-throat competition.”

L.A. and San Diego come in at three and five, respectively on the BLS list. In the L.A. area, which includes Long Beach and Glendale, 1.1 of every 1,000 jobs is a medical scientist, with a mean annual wage of $87,590. Down south in San Diego, which also includes the Carlsbad, Calif. area, the numbers are higher, with 2.37 of every 1,000 jobs a medical scientist. Those jobs have an annual mean wage much higher, at $120,150, according to the BLS.

While the life sciences industry does not have as big a toehold in Los Angeles as other areas, this is a pivotal time for the region, as it employs around 20 percent of California’s life sciences community. The area also has many gifted scientists and a highly skilled talent pool of life sciences graduates, many with advanced degrees.

In San Diego, the life sciences industry is a major driver of the innovation economy in the region in part because it is home to a number of academic institutions that employ a large number of medical scientists, Zasadny said He also touted a high quality of life, as well as public school programs that have strong STEM (science, technology, engineering and math) focuses.

The Bay Area is arguably the second brightest pharma and biotech hub in the United States, with 4.38 out of every 1,000 jobs being a position for a medical scientist. Those jobs have an annual mean wage $125,170. While the pay is much higher in the area, Zasadny said the cost of living in San Francisco is also much higher than other parts of California, especially when it comes to buying a home. Still, he said the area has so many amenities and employers, it makes it easy for companies to lure talent.

But, the Bay Area is home to large biotech companies, such as Genentech and Gilead Sciences , as well as numerous startup companies. To support the growth of those companies, which includes expanded employment, a number of developments have sprung up in the area to provide homes for these innovative companies, including BioMed Realty's Gateway of the Pacific project—a proposed 1.3 million square foot campus that will include ample office and laboratory space.

In the Pacific Northwest, Seattle has become the standout area for biotech and pharma to make its home. Some companies in the city have been on a hiring spree over the past couple of years, such as Adaptive Biotech, Juno Therapeutics , Seattle Genetics and NanoString Technologies . In the Seattle area, which includes Bellevue and Everett, Wash., every 2.5 out of 1,000 jobs is for a medical scientist, according to BLS data. The annual mean wage in the area for those positions is $78,840.

Although companies in the area have been hiring, earlier this year, Dennis Kroft, vice president of marketing and membership for Life Science Washington, said in an interview with the Puget Sound Business Journal, there are some challenges companies are facing in recruiting employees to the Pacific Northwest. With a struggling education system, Kroft said the local pharma companies are “giving supplementary training to graduates of Washington universities while struggling to attract middle and upper-level workers.” Additionally, Seattle is not seen as a large market area, which means perspective employees have fewer options for fallback positions if they suddenly find themselves in need of another position in the industry, Kroft said in February.

While there are a number of areas for job seekers to look for work, Rader’s advice on ways to stick out in the hiring process should work all over the country. She said Flagship Venture companies tend to look for candidates who demonstrate drive, are open to teamwork and have abilities to solve problems both creatively and critically. Before going into an interview situation, Rader recommends learning all you can about the company and what it does so you can ask pointed and critical questions of the recruiters.

“We look for a level of nuance and command in an interview—something that doesn’t come through on paper alone,” Rader said.