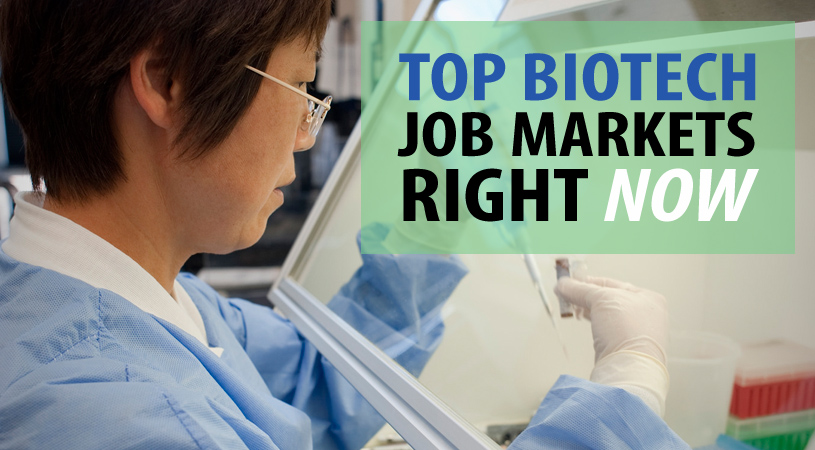 Biotechnology is a rapidly expanding global industry. The presence of a thriving biotech industry in a region is all but a necessity to participating in the global economy. These are the Top Ten U.S. Cities for biotechnology right now. The top biotech job markets were algorithmically ranked by ZipRecruiter using actual data from millions of jobseekers and jobs nationwide.

A tech trailblazer and home to some of the nation’s first biotech companies, San Francisco remains a leader in the industry with established institutions, active investors and talent from nearby schools. Tax exemptions continue to encourage growth in and around San Francisco.

Tufts and Harvard provide Boston with both medical research facilities and a constant flow of graduates who supplement an already robust biotech workforce. The Research and Development Tax Credit and the Emerging Technology fund provide loans for biotechnology companies, further supporting job creation in the industry.

Philadelphia’s economy has been revitalized by the high technology industry through the presence of the University Science Center. The center has reportedly helped create thousands of jobs. With its more affordable cost of living and low job competition, Philadelphia is becoming an attractive alternative to some more expensive biotech hubs.

The Midwest’s biotech hub is centered around Illinois, and Chicago’s high tech industry has been revived with the help of state funding since its Recession era slump. Growth has made the city attractive to private investors and entrepreneurs, and the city is experiencing startup growth in addition to continued success of established companies like Abbott Laboratories , AbbVie and Actavis .

Schools and research institutions like Scripps and University of California, have propelled growth in this Socal metro area’s biotech industry. With over 400 biotech companies, it is quickly becoming a contender against historical industry leaders like San Francisco.

Preeminent educational institutions in Los Angeles have produced graduates qualified in the biotech field for a long time, but this talent and investor interest have historically gone north and south to tech hubs in San Francisco and San Diego because of LA’s lack of infrastructure to support biotech research and development. Last year’s Los Angeles Biotech Summit brought together academic, business and government leaders to focus on nurturing the industry through construction of biotech corridors throughout the county. These efforts to keep local talent working in the city have led to positive growth.

Trenton’s economic renaissance has been bolstered by a focus on high tech, industry and research centers in the area, and initiatives supported by the Science & Technology Incubator. A low cost of living and new home construction could soon make this up-and-comer a major player in the biotech field.

Washington is known best in biotech as the home to the National Institute of Health, but the metro area also sustains the industry through businesses and facilities such as Howard Hughes Medical Institute, Human Genome Sciences and MedImmune .

Seattle shifted its economic focus to the cultivation of its high tech industry in 2006 with the announcement that it would begin a major overhaul of The South Lake Union neighborhood. Now home to 55 companies that employ 7,600 people, the metro area is quickly gaining traction in the biotech field.