Houston: One of the Fastest-Growing Life Science Communities 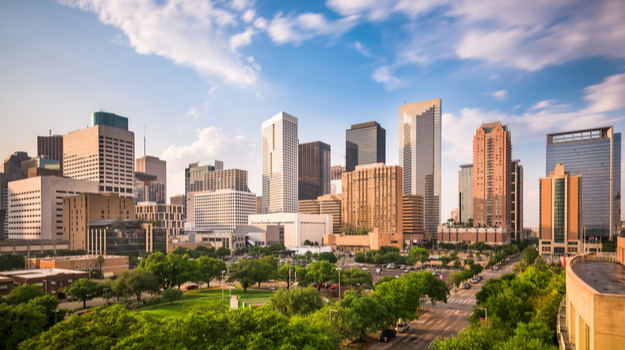 A recent report by CBRE Research analyzing U.S. life science clusters, found that Houston, Texas is the third-fastest growing life science market from 2014 to 2017. One doesn’t typically think of Texas, let alone Houston, as being a center for the life sciences. Oil, energy and tech, yes, but not life sciences.

TribTalk, a publication of The Texas Tribune, wrote in December 2018, that Texas has approximately 4,000 life science companies and 100,000 biotech workers. And in 2017, the state ranked seventh for research funded by the National Institutes of Health (NIH), to the tune of $1.16 billion.

TribTalk noted, “Academic medical centers have become major employers in our biggest cities, generating economic activity that returns net tax revenue to the state. In San Antonio, one of every six workers are employed in the city’s flourishing bioscience and healthcare sector, anchored by UT Health San Antonio, where the Department of Defense has funded research into treating PTSD among war veterans. Employment in biotech research and development in the Dallas-Forth/Worth Metroplex jumped by 34 percent between 2010 and 2016. The Houston area lost biotech R&D jobs during that time period but welcomed an increase in pharmaceutical and medicine manufacturing jobs.”

The CBRE report lists Houston as #2 in emerging life sciences clusters. All of these, the report notes, “exhibit an attractive combination of a substantive life science workforce, including key scientists, strong recent life sciences employment growth, ample NIH funding, top-ranked schools and medical institutions, and a sizeable high-tech workforce to support future convergence between the industries.”

From 2014 to 2017, the report indicates, the city’s life sciences workforce grew by slightly under 14 percent. The city has approximately 3,100 biomedical engineers, biochemists, biophysicists and chemists working there.

Houston ranks thirteenth for top-20 markets for new life sciences talent, according to the CBRE report. In 2016-2017, 1,282 total biological and biomedical science degrees were granted, with 255 of them being doctorates. Three of its biological sciences programs are ranked in the top 100.

BioHouston is a non-profit tax-exempt corporation founded by Houston area academic and research institutions. The goal is to establish the Houston region as a vigorous global competitor in life science and biotechnology commercialization.

Although BioHouston sponsors several events, one coming up on May 1-3 is the 2019 Texas Life Science CEO Summit. Registration for the event is exclusively for CEOs of life science companies that are developing a product.

The project was announced in April 2018, with groundbreaking expected in 2019 and the project to open in 2022. It is expected to generate a $5.2 billion stimulus to Texas and create 30,000 new jobs.

“The new 30-acre research campus will provide our top medical minds with the resources to remain at the forefront of the health care industry,” Governor Greg Abbott stated at the time of the April announcement. “This cutting-edge facility will not only generate thousands of jobs, but it will solidify Texas’ position as an international leader in biomedical research.”

Noting that Houston’s Texas Medical Center is the largest medical complex in the world, the Greater Houston Partnership isn’t specific to the life sciences, but does point out that that TMC’s presence is a major driving force in the broader region’s life sciences sector. Houston hosts more than 1,760 life science companies, hospitals, health facilities and research institutions with more than 360,000 people in those areas.

A June 2018 report on Houston’s Biotech and Life Sciences notes that in 2017 there were almost 4,200 clinical trials ongoing in the Houston region, or about 13.4 percent of all clinical trials in the U.S.

The Innovation Institute’s accelerator, TMCx, focuses on early-stage companies in the area of medical devices, digital health care services, diagnostics and therapeutics. TMCx+, a related program, is an incubator targeting seed-stage companies in those same sectors. So far, 84 companies have enrolled in the TMCx program and a total of $157 million in funding was raised.

The TMC also launched the TMC Venture Fund in 2017, which has a goal of investing $25 million in early-stage health care tech companies in Houston.

TMC Innovation has also partnered with Johnson & Johnson’s JLABs @TMC and with the AT&T Foundry, which supports companies in the area of digital health services.

Here’s just a taste of recent life science news coming out of Houston.

On February 25, Marker Therapeutics, headquartered in Houston, updated data from four clinical trials that are using its multi-antigen targeted T-cell (MultiTAA) therapies. One of the highlights was data from an ongoing clinical trial in patients with acute myeloid leukemia (AML).

“We continue to be highly encouraged by the clinical results we’ve seen to date with our MultiTAA therapies,” stated Peter L. Hoang, president and chief executive officer of Marker Therapeutics. “In AML, we believe we are seeing increasing evidence of meaningful therapeutic benefit for patients with limited treatment alternatives. Our multiTAA therapy appears to be safe and well-tolerated with the potential to mediate a meaningful anti-tumor effect, in addition to demonstrating a compelling correlation between therapeutic responses, with superior in vivo expansion of our T-cells.”

On February 21, Houston-based Nanospectra Biosciences was the featured innovation success at the Congressional Healthcare Innovations Summit in Houston, held at Rice University. Nanospectra is developing a novel use of nanomedicine for selective thermal ablation. Its AuroLase ultra-focal therapy for prostate cancer was highlighted.

“Nanospectra is honored to be highlighted as an example of healthcare innovation in the Houston area, and more specifically, for the continued development of its underlying technology originally developed locally at Rice University,” stated state Congressman Dan Crenshaw at the keynote address.

Moleculin Biotech, based in Houston, announced on January 9 that it had begun recruiting patients in Poland for its second clinical trial of Annamycin to treat relapsed and refractory acute myeloid leukemia. Moleculin’s drug candidates came out of license agreements with The University of Texas System on behalf of the MD Anderson Cancer Center.

“We are encouraged to see ready access to qualified patients in Poland,” stated Walter Klemp, Moleculin’s chairman and chief executive officer. “Having now cleared the unique European approval process to ship Annamycin, which had delayed the start of the trial in Poland, clinical supplies are now in country and ready to treat patients.”

Houston once had the motto, “Space City: A space of Infinite Possibilities.” And maybe it still is for a fast-growing life science industry.