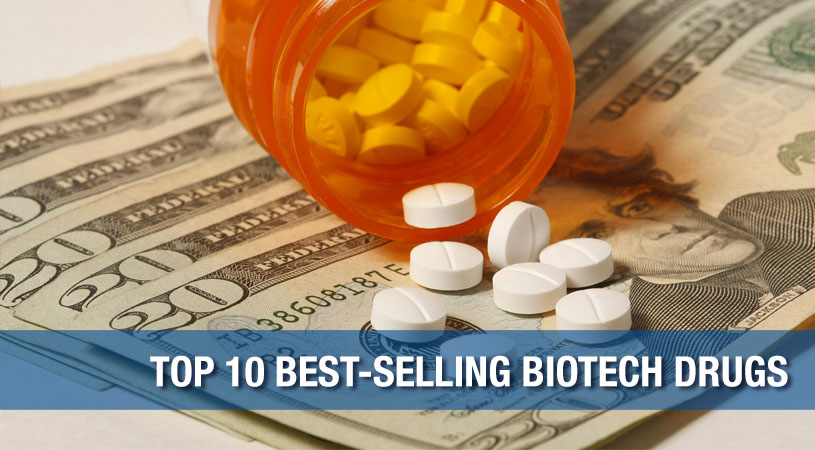 Biotechnology drugs are drawing increasingly more public attention today. From U.S. biotech revenues reaching nearly $72 billion in 2013, according to Plunkett Research, to skyrocketing biotech stock prices, some even believe biotech could become the next tech bubble.

Then, there’s recent media attention around Democratic presidential candidate Hillary Clinton’s remarks on Twitter about price-gouging for specialty biotech drugs, which sent stocks tumbling—further proving that the public is immersed in and reacting to the biotech conversation. The tweet sparked a major sell-off for a number of biopharma companies, including Biogen , Valeant , Alexion and Horizon Pharma , with stocks falling more than 9%.

Biotechnology drugs differ from pharmaceutical drugs in that they use biotechnology as a means for manufacturing, which involves the manipulation of microorganisms, such as bacteria, or biological substances, like enzymes, to perform a specific process. These drugs can treat specific diseases and conditions, ranging from arthritis to cancer.

The U.S. spent roughly $26 billion on research and development in the biotechnology sector in 2012, according to Statistica, and claimed over 40 percent of the world’s share of filed biotechnology patents between 2010 and 2012.

Meanwhile, the biotech drug landscape is feeling the pressure of the long-expected arrival of copycat biologic blockbusters, known as biosimilars, which provide discounted prices for patients and have projected sales reaching $25 billion by 2020, according to market research firm IMS Health. While the major impacts have yet to hit biotech companies, many firms are concerned about the consequences.

Here’s a look at the top 10 best-selling biotechnology drugs, based on global revenues in 2014, according to Statista.

AbbVie's stock increased more than 2 percent recently, while the NYSE ARCA Pharmaceutical Index (DRG) dipped more than 1 percent in the same timeframe, in large part because of the company’s confidence in the remarkable performance of its top revenue-generating rheumatoid arthritis drug, Humira, during the third quarter of this year.

In 2014, Humira’s $12.5 billion sales contributed to 63 percent of AbbVie’s overall revenue. However, investors have some concerns about the biotechnology drugs being set to lose its key patent in the U.S. next year and in Europe in 2018. Meanwhile, Amgen , Novartis AG and Pfizer are allegedly in a race to develop biosimilar versions of Humira. Analysts emphasize that biosimilars wouldn’t be available in the market until at least 2020, due to AbbVie’s intellectual property. Analysts have mixed forecasts about Humira’s potential loss of revenue when Humira biosimilars hit the market.

Remicade is used to treat certain types of arthritis, including rheumatoid arthritis, arthritis of the spine and psoriatic arthritis, as well as certain bowel diseases like Crohn’s disease and ulcerative colitis and skin disease chronic plaque psoriasis.

The drug works by blocking the actions of tumor necrosis factor alpha, which is a certain natural substance in the body. This helps to decrease swelling and immune system weakness, and in turn, slows the damage caused by the disease.

Some analysts are concerned about the company losing its patent for Remicade over the next 18 to 24 months and the emergence of biosimiliars.

Rituxan treats rheumatoid arthritis and is also used in combination with other cancer medication to treat non-Hodgkin’s lymphoma, among other diseases. Roche/Genentech and Biogen co-market Rituxan in the United States.

This is yet another example of biotechnology drugs that could be threatened by biosimilars. According to researchers from Pfizer , a biosimilar to Rituxan recently demonstrated comparable pharmacokinetic activity for patients with rheumatoid arthritis.

Enbrel is part of the most popular class of biologics, TNF-alpha drugs, which is also known as the most expensive group of drugs in many parts of the world.

Phase III trials of a biosimilar of Enbrel recently met safety, efficacy and pharmacokinetic equivalence endpoints in patients with moderate-to-severe rheumatoid arthritis, which is news that could ultimately affect sales of Enbrel in the future.

Lantus, or insulin glargine, is used to treat diabetes. This is among the biotechnology drugs drug is also feeling the looming threat of biosimilars, with Eli Lilly & Co. and Boehringer Ingelheim rolling out a biosimilar version of Lantus in the U.K. that touts a 15 percent price reduction to Sanofi’s brand.

Launched in 2004, Roche’s blockbuster cancer drug Avastin could soon compete with Amgen and Allergan’s biosimilar version, which succeeded in a late-stage trial against non-small-cell lung cancer.

Avastin treats a variety of different cancers, with 20 percent to 25 percent related to lung cancer. The good news for Avastin: U.S. patents aren’t due to start expiring until 2017, so there’s some time.

Herceptin is one of the breast cancer treating biotechnology drugs, as well as malignant tumor of the stomach and esophagus and stomach cancer.

Herceptin is a cellular antibody that inhibits the protein that fuels tumor growth and is used in conjunction with surgery and chemotherapy treatment.

As expected, biosimilar drug developers are also targeting Herceptin, with Merck holding global rights to a copy of Herceptin.

Intas Pharmaceuticals could get approval this year to launch a biosimilar of Neulasta, which is expected to increase sales by 20 percent to 25 percent for Intas over the next three years.

Prevnar is a pneumococcal vaccine and a conjugate vaccine used to protect infants, young children and adults against disease caused by the bacterium Streptococcus pneumoniae strains.

Prevnar 13 is the world’s biggest vaccine by sales and helped Pfizer gain 44 percent vaccine growth in this year’s second quarter.

The vaccine’s popularity shot up after the Centers for Disease Control and Prevention (CDC) recommended it for universal use among people ages 65 and older.

Avonex reduces the frequency of relapses in people who have multiple sclerosis (MS) and delays some of the physical disabilities caused by MS.

Avonex, in addition to biotechnology drugs Tysabri and Tecfidera, caused Biogen to pull in $8 billion from its MS treatments in 2014.

While these top 10 best-selling biotech drugs have benefited from winning revenue streaks, there’s the looming threat of many of these drugs coming off patent and biosimilars set to make a bold entrance in the future—making the sector one to watch closely for change in the years ahead.