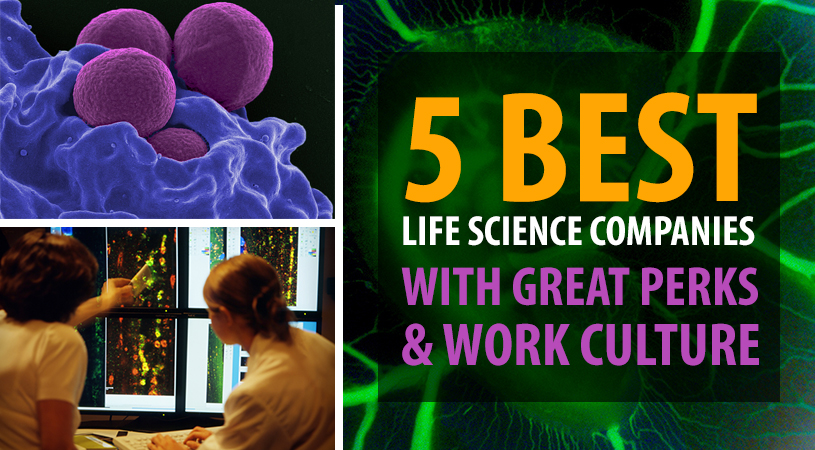 Fortune magazine recently teamed with Great Place to Work to survey employees around the country and develop a list of the 100 Best Companies to Work For. About two-thirds of Fortune’s scores were based on the results of the Trust Index Employee Survey, which took into account employees’ attitudes about management’s credibility, peer camaraderie and overall job satisfaction.

A Culture Audit also evaluated various perks that the companies offered, such as pay and benefits, internal communications and diversity. BioSpace used that list and chose the top five life science companies—biotech, pharma and medical device companies—to understand what makes them so great to work for. BioSpace recently did something similar, recognizing The Top 8 Pharma Companies to Work For. This list is a little broader, and leans more toward biotech companies.

Digging a little deeper, BioSpace often found that Fortune magazine was not the only magazine or organization to recognize these companies as great places to work.

Genentech , headquartered in South San Francisco, Calif., is a member of the Roche Group (which is also the parent company of Roche Diagnostics, which is also on this list). The company was founded in 1976 and is often considered to be the first modern biotech company. It was acquired by The Roche Group in 2009. The Genentech campus is the headquarters for Roche pharmaceutical operations in the U.S., and the Genentech Research and Early Development center operates independently within Roche.

The company employs about 14,000 people, with about 1,100 of them being researchers, scientists and postdoctoral fellows. The company’s five primary disease categories are oncology, immunology tissue growth and repair, neuroscience and infectious disease.

As an example of the company’s Silicon Valley-like corporate culture, before it broke ground on a new 68,000 square-foot employee center, it surveyed its employees, asking what they wanted. The new center will include a number of things from their wish lists, including a farmers market, pool tables, a primary and urgent care clinic. Its Building 35 includes nap pods and a cafeteria that features Indian and vegan menu items. It also pays bicyclists $12 a day to commute, and offer a bike storage room, lockers and showers.

“At Genentech, we’re dedicated to creating a connected, inspiring culture for more than 14,000 employees who come to work every day to deliver on our mission of helping people with serious diseases,” Nancy Vitale, vice president of human resources at Genentech told BioSpace. “While our company has evolved in the 40 years since our founding, we strive to remain patient-centered, science-driven and people-focused. I believe this clarity of mission, combined with our focus on inclusion and employee wellbeing, attracts the most talented, diverse people and empowers them to do their best work to help our patients.”

Headquartered in Kalamazoo, Mich., Stryker is perhaps best known for its surgical supplies, although it is actually a medical supply company. Stryker develops and markets implants used in joint replacement and trauma surgery, surgical equipment and navigation systems, endoscopic and communication systems, and numerous other types of medical devices. Its three broad business segments are reconstructive, medical and surgical, and neurotechnology and spine. Stryker reported net sales in 2014 of $9.7 billion and employs over 26,000 people at 172 locations worldwide. In the U.S., Stryker has 12,579 employees. Among the company’s numerous perks are 100 percent paid healthcare, health insurance for part-time employees, and telecommuting and job sharing availability.

Stryker ranks high on Fortune’s list at number 21, a slight drop from last year’s ranking of 19. The Sunday Times also ranked Stryker number 32 on its “100 Best Companies to Work For in the U.K.” list this year. Stryker also ranked fourth out of 15 companies in Manufacturing & Production, and for the third year in a row hit Glassdoor Employees’ Choice Award for the Best Places to Work in 2016, this year landing at spot 43.

Novo Nordisk has been on Fortune’s 100 Best Companies To Work For list for eight years, rising from number 66 in 2015 to number 55 in 2016. The company is headquartered in Bagsvaerd, Denmark and has production facilities in eight countries, and affiliates or offices in 75 countries. The company’s U.S. headquarters is in Plainsboro, N.J. Novo Nordisk has a significant U.S. presence, including an insulin manufacturing facility in North Carolina and the Novo Nordisk Research Center in Seattle, Wash. Novo Nordisk reported $16.1 billion in revenue in 2015 and employs about 5,250 people in the U.S. and about 40,000 people worldwide.

In 2012, Corporate Knights magazine named the company as the most sustainable company in the world. Novo Nordisk pursued what it calls a triple bottom line: financial, social and environmental gains.

“The main foundation for Novo Nordisk is the triple bottom line because that is what’s protecting our license to operate,” said Lars Rebien Sorensen, Novo Nordisk A/S’s president and chief executive officer to Corporate Knights. “That begs and obliges everybody in the company not only to see that we become a good business—that’s the financial bottom line—but that we do so in a way that is socially and environmentally responsible.”

Novo Nordisk was also named Company of the Year by Medical Marketing & Media, and Ethisphere’s 2010 100 World’s Most Ethical Companies. The company also ranked number 22 on the World’s Best Multinational Workplaces by Great Place to Work.

Novo Nordisk is best known for a comprehensive portfolio of products and delivery systems to treat diabetes.

Based in Tarrytown, N.Y., Regeneron Pharmaceuticals was founded in 1988 and focuses on drugs for eye diseases, colorectal cancer and inflammatory conditions, with pipeline products in areas of high unmet medical need such as high cholesterol, cancer, rheumatoid arthritis, asthma and atopic dermatitis. Last year, Regeneron reported about $4.1 billion in revenue while employing about 3,800 people in the U.S.

Forbes listed Regeneron as number 91 on a list of America’s Best Midsize Employers, and number 4 in Innovative Companies. On the Fortune list, Regeneron ranked number 72, up from last year’s ranking of 99.

“At Regeneron, we pride ourselves on innovative thinking and constant reinvention,” Angi Calkins, executive director of talent acquisition at Regeneron, told BioSpace. “Our employees ‘follow the science’ in order to turn their ideas into medicines that improve patients’ lives. We have four approved medicines and a dozen entirely homegrown antibody candidates in the clinical pipeline, and we are poised for multiple additional FDA decisions over the next few years.”

Calkins added, “Every day, we are challenged to solve problems and reinvent the status quo, and we get our best ideas and solutions through collaboration. We know our work is not about personal wins but rather the bigger picture of helping people in need, and that’s what keeps us motivated.”

Roche was founded in 1896 and is considered to be the world’s largest biotech company, with medicines in oncology, immunology, infectious diseases, ophthalmology and diseases of the central nervous system. Roche is also the world leader in in vitro diagnostics and tissue-based cancer diagnostics, and a frontrunner in diabetes management.

The Roche Group, headquartered in Basel, Switzerland, is active in over 100 countries. Genentech, in the United States, is a wholly owned member of the Roche Group. Roche is also the majority shareholder in Chugai Pharmaceutical, Japan. Roche Diagnostics’ U.S. headquarters is located in Indianapolis and employs about 4,335 people in the U.S.

Working Mother also said, “Ask any parent what’s on their benefits wish list, and it might sound a lot like what this biotechnology company offers. Pregnant employees are eligible for 22 job-guaranteed weeks off, with 10 fully paid, and primary adoptive caregivers receive six paid weeks of leave, plus $5,000 in assistance.” Compressed schedules and telecommuting are common.

“At Roche, we are passionate about transforming and improving patients’ lives around the globe,” says Maggie Weston, Roche’s group head of attraction & sourcing. “For 120 years now, we have been committed to providing innovative solutions for unmet medical needs with our combined strengths in diagnostics and pharmaceuticals. We strive to provide a collaborative, inspiring work environment that allows all of our employees to develop professionally as well as personally. We want our people to enjoy coming to work every day and to be passionate and proud about who we are and what we do.”