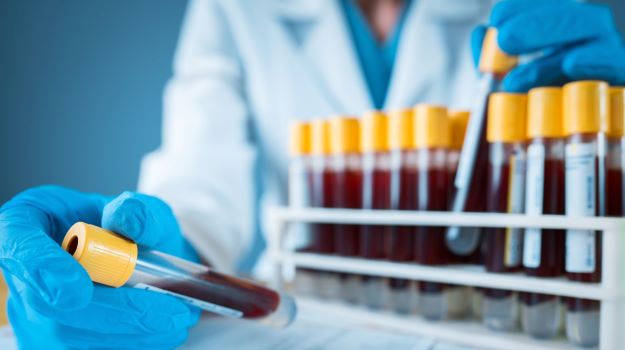 Researchers at Washington University School of Medicine in St. Louis developed a simple and rapid blood test that can predict patients at highest risk of most severe COVID-19 complications or death. The test valuates mitochondrial DNA levels. When mitochondrial DNA, normally found inside cells, in the mitochondria, spills into the bloodstream, it signals that a particular type of violent cell death is occurring. The research was published in the journal JCI Insight.

“Doctors need better tools to evaluate the status of COVID-19 patients as early as possible because many of the treatments—such as monoclonal antibodies—are in short supply, and we know that some patients will get better without intensive treatments,” said co-senior author Andrew E. Gelman, the Jacqueline G. and William E. Maritz Endowed Chair in Immunology and Oncology in the Department of Surgery. “There’s so much we still don’t understand about this disease. In particular, we need to understand why some patients, irrespective of their ages or underlying health in some cases, go into this hyper inflammatory death spiral. Our study suggests that tissue damage may be one cause of this spiral, since the mitochondrial DNA that is released is itself an inflammatory molecule.”

Pfizer and BioNTech announced that their COVID-19 vaccine was probably just as effective against the variant strain of the virus, B.1.1.7, found in the U.K. The variant was believed to have emerged in the UK in September 2020 and is noted to be more infectious, although not more deadly than earlier strains. The work hasn’t been peer-reviewed yet, but was published on preprint server bioRxiv. The Pfizer-BioNTech study indicated that they found “no biologically significant difference in neutralization activity” in laboratory tests from the original coronavirus strain and the B.1.1.7. strain. It reported that all mutations found with the new variant were neutralized by the blood antibodies of the 16 participants who had been given the vaccine earlier. However, they warned that global spread of the variants required “continuous monitoring of the significance of changes for maintained protection by currently authorized vaccines.”

Amyotrophic lateral sclerosis (ALS) is a progressive neurological disease that destroys the nerves linked to the muscles. It typically leads to complete paralysis. Four years ago, the University of Malta established a national ALS Registry and Biobank to identify ALS patients and collect data on their residence, occupation, lifestyle and environmental exposures. They found an unusual result—the most frequently mutated ALS genes found in general populations were typically not affected in Malta ALS patients. Specifically, the Malta patients did not have mutations in the C9orf72, SOD1, TARDBP and FUS genes. They are now working to identify what genetic aberrations are causing ALS in about half of the Maltese patients.

Researchers at Stanford Medicine, investigating old mice and human cell cultures, found that immune cells called myeloid cells, which are found in the brain, circulatory system and peripheral tissues not only battle infectious agents, but work on cleaning up debris, like dead cells and aggregated proteins. They also provide nutrients to other cells and act as guards, looking for signs of invading pathogens. But as we age, the myeloid cells stop working as effectively at their health-protecting functions and begin causing damage to other, normal tissues. They found that by blocking the interaction of PGE2, a hormone, and a receptor, that it could restore the youthful metabolism in mouse and human myeloid cells in a Petri dish and in living mice. It also reversed age-related mental decline in older mice.

Scientists at KU Leuven have identified a biological mechanism behind irritable bowel syndrome (IBS) and other food intolerances. The research was conducted in mice and humans. Approximately 20% of people in the world suffer from IBS, which results in stomach pain or severe discomfort after eating. The team found a mechanism between certain foods and activation of mast cells that release histamine, resulting in pain and discomfort. The initial work involved infecting mice with a stomach infection while feeding them ovalbumin, a protein in egg white that is often used as a model food antigen. Once the infection cleared, they were fed ovalbumin again, to determine if they had become sensitized to it. They were. The ovalbumin alone provoked mast cell activation, histamine release, and digestive intolerance. Further experiments found that the immune response was only in the part of the intestine infected by the disruptive bacteria, which suggests a spectrum of food-related immune diseases.

How Some Prostate Cancer Cells Become Resistant to Treatment

Researchers at Flinders University discovered a new mechanism where prostate cancer cells “switch” character in order to become resistant to therapy. They believe this is key to understanding how aggressive prostate cancer subtypes and neuroendocrine prostate cancer (NEPC) develop after hormonal therapies. NEPC has no effective treatments, and affects up to 15% of men, with typically poor outcomes. The research was published in Cell Reports.

“Increased cellular plasticity is increasingly recognized as a key feature by which prostate cancers become resistant to therapy and progress to a lethal stage,” said lead researcher Associate Professor Luke Seith, from the Flinders Health and Medical Research Institute. “Our new study reveals that a particular molecule, the microRNA ‘miR-194’, can enhance this plasticity in prostate cancer, leading to the emergence of NEPC. By targeting miR-194, we were able to slow down and inhibit the growth of prostate cancer models with neuroendocrine features.”