Profiling the Risk-Benefit Analysis of COVID-19 Vaccines for Kids 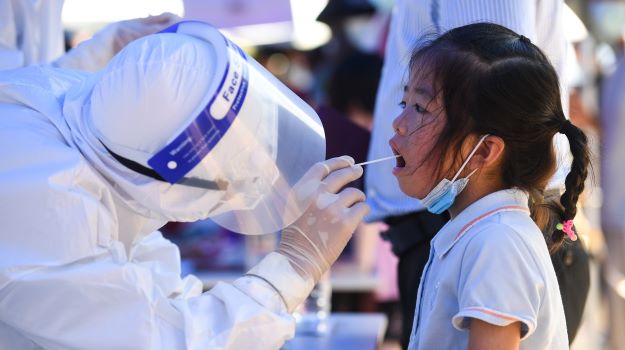 The United States and other wealthy nations now stand at an important place in their COVID-19 vaccine campaigns. A recent poll conducted by the Associated Press-NORC Center for Public Affairs Research found that 80% of American adults who have not yet received a vaccine either likely or definitely will not. So now the question largely turns to vaccinate the remainder of the population – namely, those under 12.

This in turn poses another important question: what is the risk-benefit analysis here? There are two levels to determining risk: one weighing potential long-term implications for children of either receiving a vaccine or contracting COVID-19, the other on a population disease-control level.

According to the Centers for Disease Control and Prevention (CDC), 340 of the just over 603,000 deaths attributed to COVID-19 in the United States over the past 17 months have been in children and adolescents under the age of 18. This number is infinitesimal – but not for the parents of these 340 children.

When it comes to rushing a vaccine forward for children, however, many are advising caution. Concerns about vaccinating children and adolescents have grown with the recent uptick in cases of myocarditis or pericarditis, a rare inflammation of the heart muscle seen in young adults following vaccination.

In June, a CDC panel confirmed a likely connection between the mRNA vaccines made by Moderna and Pfizer and BioNTech and the rare occurrences of this condition. The link seems to be particularly prevalent in young males.

In a study of more than 5 million vaccinated people, Israeli researchers found more myocarditis cases reported in young men aged 16-30 who received the Pfizer vaccine than would have been within the average range for the condition.

Now, the U.S. Food and Drug Administration (FDA) is requesting that the companies expand the number of school-aged children involved in their clinical trials. On Monday, Moderna confirmed that it would increase the size of its trial in children aged 5 to 11. This would push any conditional approval in this age group to the end of the year, at the earliest.

Meanwhile, Pfizer spokeswoman, Jerica Pitts, told the Washington Post that the company has not yet made any updates to its trial design or timeline. Results from this trial are anticipated to come in September for the school-aged 5-to-11 demographic, with data on babies as young as 6 months in October or November.

Dr. Cody Meissner, M.D., a pediatric infectious disease vaccine expert at Tufts Children's Hospital, said that the FDA is right to be cautious.

“Right now, the rates of hospitalization for myocarditis after the second dose in young adults and adolescents is 10 times higher than the hospitalization rate for COVID infection,” Meissner told BioSpace. “So you'd have to balance the risk versus the benefit for each age group and this is not, in most cases, a serious disease in young children.”

But according to Dr. Leslie Cooper, M.D., chair of the Department of Cardiology at Mayo Clinic in Florida, contracting COVID-19 poses a higher risk of injury to the heart.

Meissner pointed out that there are many other questions that still need to be addressed in the clinical trials, including dosing.

“It's very likely that children will not need that full adult dose. So the question becomes, what is the dose that they will need? Another question is, do children really need two doses? There was a study from Israel showing that a single mRNA dose among teenagers was 100% effective in preventing illness,” he said.

On the flip side of the coin, there are questions about the potential for children to suffer long-term symptoms after a COVID-19 infection. This cluster of ailments, often called Long COVID, includes fatigue, insomnia, headache, and difficulty concentrating.

While a significant amount of research has been conducted in adult populations, children were largely thought to be immune from this phenomenon. But evidence has been building to indicate that this may not be the case, hitting peak intensity in April with the emergence of data from a series of studies.

Data released in February and updated in April by the U.K. Office of National Statistics (ONS) showed that 9.8% of children in the 2 to 11-year-old age group and 13% of 12 to 16-year-olds reported at least one persistent symptom five weeks after a positive COVID-19 diagnosis.

Around the same time, results of a survey were released stating that one-quarter of children experienced symptoms more than five months after being released from a hospital in Russia.

These reports are tempered by the findings of Dr. Jakob Armann, a pediatrician at the Dresden University of Technology in Germany. Armann and his colleagues surveyed more than 1,500 adolescents, including 200 who possessed antibodies indicating a previous SARS-CoV-2 infection, to determine the prevalence of long COVID and found no statistical difference between the two groups. This led Armann to surmise that the true figure is perhaps as low as 1%.

Armann also posited that other impacts of the pandemic such as school closures and witnessing sick or dying family members could elicit these same symptoms, confusing the numbers.

For Meissner, the dataset is still too small for a consensus theory.

“At this time, it doesn't seem as though that’s a problem, particularly in younger children. It's hard to answer that question because there's been so little disease in children. In contrast to adults who’ve had millions and millions of cases, the number of cases that have occurred in children is pretty small. So I don’t think avoiding long-term complications should be a basis for recommending pediatric vaccines,” he said.

The ideal approach, according to Meissner, is what he calls the cocooning effect.