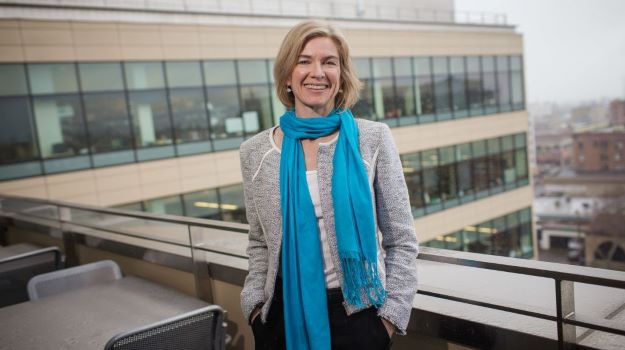 Nick Otto For The Washington Post via Getty Images

Jennifer Doudna is best known for discovering CRISPR/Cas9 gene editing with Emmanuelle Charpentier, and both winning the Nobel Prize in Chemistry in 2020. Doudna also co-founded several companies, including Cambridge, Mass.-based Intellia Therapeutics, which recently announced a major breakthrough in the use of CRISPR/Cas9 gene editing. Doudna recently discussed CRISPR and Intellia with CNBC.

Intellia’s announcement was, along with Regeneron Pharmaceuticals, that they had interim clinical data from their ongoing Phase I trial of their in vivo genome editing candidate, NTLA-2001. NTLA-2001 is being developed as a single-dose treatment for transthyretin (ATTR) amyloidosis. The therapy is based on CRISPR/Cas9, but even more importantly, is the first CRISPR therapy to be administered systemically.

It has two parts, a guide RNA specific to the disease-causing gene and messenger RNA that encodes the Cas9 enzyme. They are delivered in lipid nanoparticles, which allows the therapy to be administered in the bloodstream. To this point, the use of CRISPR has been only in ex vivo therapy, where cells are taken from the body and engineered using CRISPR in the laboratory before being injected back into the patient.

Of CRISPR gene editing, Doudna said that with CRISPR’s discovery to treatment occurring in less than 10 years, it is “One of the fastest rollouts I think of technology from the fundamental, initial science to an actual application. It’s largely because the technology comes at a moment when there’s enormous demand for genome editing, as well as a lot of knowledge about genomes.”

Doudna discussed several challenges facing CRISPR. As the Intellia announcement emphasized, there are obstacles in getting edited molecules to where they need to be. “This is especially an issue in clinical medicine where being able to edit brain cells, heart cells or muscle cells has incredible potential but right now we don’t really have the tools to introduce the editors into those cells,” Doudna said. “We have the editors; we just don’t know how to get them where they need to go.”

There are also, of course, ethical issues. Most notably, in November 2018, He Jiankui, a Chinese researcher, went public claiming he used CRISPR/Cas9 to change the DNA of embryos for seven couples. A set of twins was born from one of them.

Jiankui used CRISPR to disable the CCR5 gene, which creates a protein that allows HIV to enter a cell. All of the men of the seven couples had HIV and the women did not. The reported goal of the controversial procedure was to prevent transmission of HIV, even though all seven of the men’s HIV was strongly suppressed by standard HIV drugs.

The announcement was met by global condemnation, a global moratorium and guidelines on gene editing of germ cells, and He Jiankui receiving a three-year prison sentence in China. At issue was, because he edited the embryos’ germ lines, the changes could be inherited, should any of them go on to have children.

There is an expense issue as well. Doudna pointed out that treating sickle cell disease with CRISPR runs about $2 million per patient. “That is clearly not a price point that will make this available to most people that can benefit from it.”

Early work using CRISPR to modify diseases has mostly been in sickle cell disease. It has been a good target for the technology because, Doudna says, blood stem cells can be “harvested, edited and then reintroduced to patients.”

Eye diseases have also been low-hanging fruit for CRISPR and other gene therapies because it is relatively easy to introduce the therapies directly into the eye. So far, she notes, there has been a success in delivering CRISPR tech to the liver because “a liver is an organ that naturally takes up molecules in the body,” Doudna said.

More troublesome are other organs, such as the brain, heart and muscles. Doudna points out that “there are some technologies already that enable some of this, for example using various kinds of viruses or virus-like particles, and I’m excited about the innovation that will come in the next few years in this regard.”

Doudna also said that human medicine is not the only area where CRISPR is likely to have a major impact. It’s being used in agriculture, for example. Instead of spending months or years on breeding, or current techniques for genetically modifying crops, she said that CRISPR can be used to modify plant genes “without touching anything else. This is opening the door to lots of things now that can be done to both address challenges of climate change, dealing with drought conditions, introducing traits in the plants that give them protection against pests.”