When Will Biosimilars Impact The U.S. Market?

When Sandoz filed the first biosimilar application with the U.S. Food and Drug Administration (FDA) in the last year for its own version of Amgen's Neupogen, anxiety crested throughout the biologics industry. For established biotechs with drugs falling off the patent cliff, it was a warning shot. Biosimilars could threaten some cherished and lucrative franchises—and a annual sales numbers for 2013 from Thomson Reuters underscore that risk:

The list is extensive and smaller biotechs could be hit particularly hard.

“For some companies, a big part of their revenue comes from one drug,” says Mari Serebrov, regulatory editor for BioWorld and author of the Thomson-Reuters Biosimilars Report 2014. “It’s going to be challenging for them.”

However, on the other side of the coin, biosimilar companies are looking forward to cracking the U.S. and other markets. The Sandoz application was followed closely by one from Celltrion for its biosimilar for Remicade, which sold $6.7 billion in 2013. According to the Thomson-Reuters’ Biosimilars Report, global biosimilar sales could hit $25 billion by 2020.

The prospect of grabbing even a small piece of this pie has companies licking their lips. But there are many caveats, and it’s difficult to predict how this emerging market ultimately shakes out. 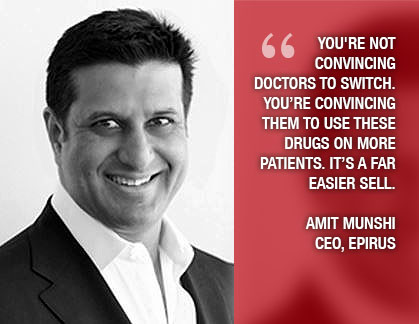 Just a few years ago, people used to call these drugs biogenerics, but there’s nothing generic about them. Biotech’s open secret is that even innovator biologics vary from batch to batch. To make a biosimilar, companies must get close to the original molecule, but can never replicate it.

“You’re not trying to hit a bull’s-eye,” says Epirus CEO Amit Munshi, you’re just trying to get all the characteristics in range.”

But this fuzziness is more than a manufacturing problem; it’s a challenge for the FDA.

“For biologics, the FDA looks at safety and efficacy—not so for biosimilars,” says Serebrov. “Reviewers are instead looking at how similar it is to the approved biologic. And that similarity is something they never had to look at before.”

The Empires Strike Back
One thing that’s virtually certain is that biosimilar litigation will keep lawyers busy for years to come. Janssen, which makes Remicade, has been fighting Celltrion in courts all over the world. In the U.S., both Sandoz and Celltrion filed unsuccessful, preemptive lawsuits, hoping courts would rule out patent infringement even before their drugs were approved. The breadth of IP law in the U.S. makes these issues particularly complicated.
“In the manufacturing process, if you have a two-degree temperature shift and a one-grade PH change and that changes how the drug folds, that’s patentable in the U.S,” says Munshi. “It’s not patentable outside the U.S.”

“Companies are looking to create a franchise around a blockbuster,” says Serebrov. “Amgen had Neupogen, lost patent protection, and came out with Neulasta, which is longer-acting.”

What Will Doctors Do?
Another place the biosimilar distinction is important? The pharmacy. In addition to their makeup, they cannot be automatically substituted by a pharmacist. Unless the FDA approves the drug as an interchangeable, physicians will have to specify the biosimilar. Will they?

A recent survey from Decision Resources Grou found that more than half of rheumatologists in the U.S., France and Germany will likely prescribe biosimilar Remicade once its proven effective and appropriately discounted. However, they are also unlikely to switch patients from Remicade. This is no surprise to Munshi, whose company has its own version of Remicade.

“I have to convince doctor by doctor, patient by patient, to switch from the innovator to the biosimilar in the face of medical malpractice,” says Munshi. “All the attention has been on how you make it, how you get it approved. But we’re going to see that shift in the next few years to how you sell it, how you make money.”

For Munshi and Epirus, these barriers are keeping them away from the U.S. market. The company is establishing manufacturing in Brazil, India and elsewhere, taking advantage of preferential treatment for local manufacturers. In addition, because expensive biologics have not penetrated many markets, there are tremendous opportunities for biosimilars.

“You’re not convincing doctors to switch,” says Munshi, “you’re convincing them to use these drugs on more patients. It’s a far easier sell.” 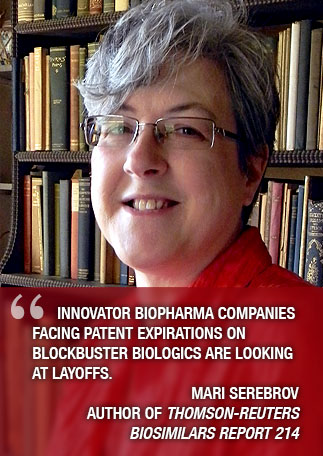 Around the world, biosimilars present an opportunity to offer less expensive drugs to more people. But they’re also seen as an economic fire starter. For example, South Korea hopes the burgeoning industry will generate as many as 120,000 jobs by 2015.

The situation in the U.S. is much less clear. With biosimilars facing a tough legal, regulatory and acceptance path, gains will be incremental. On the other hand, established biotechs are already trimming down for a more uncertain future.

“Innovator biopharma companies facing patent expirations on blockbuster biologics are looking at layoffs,” notes Serebrov. “In July, Amgen announced cutbacks of up to 15 percent of its workforce. A large share of those cutbacks will be manufacturing jobs, as Amgen plans to update and streamline its manufacturing processes.”

In other words, the “fasten seatbelt” light remains on.