Research Roundup: How the COVID-19 Virus Infects Other Cells and More 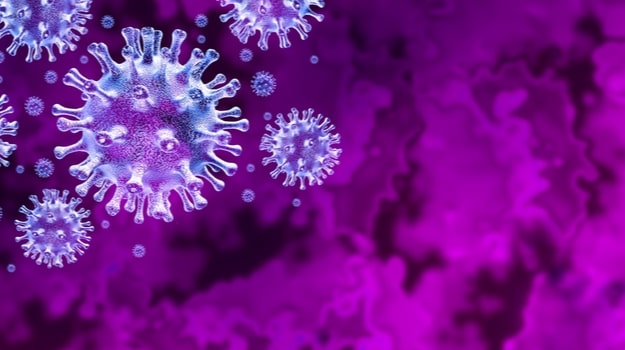 The Unusual Way the COVID-19 Virus Infects Other Cells

Researchers with the University of California, San Francisco found that when the SARS-CoV-2 virus infects a human cells, the infected cell grows multi-pronged tentacles that are studded with viral particles. These filaments, called filopodia, reach out to still-healthy neighboring cells, which then bore into the cells’ bodies and infect the healthy cells with virus. The research was published in the journal Cell.

Scientists previously believed the SARS-CoV-2 virus infected cells in a typical way, which is by finding receptors on the surface of cells in a person’s mouth, nose, respiratory tract, lungs or blood vessels, and replicating and invading larger cells. Other viruses, such as smallpox, HIV and some influenza viruses also used filopodia to improve their ability to infect cells.

“By conducting a systematic analysis of the changes in phosphorylation when SARS-CoV-2 infects a cell, we identified several key factors that will inform not only the next areas of biological study, but also treatments that may be repurposed to treat patients with COVID-19,” said one of the study’s authors, Nevan Krogan, professor, Department of Cellular Molecular Pharmacology at the UCSF School of Medicine.

They also tested 87 drugs and molecules by mapping global phosphorylation profiles to dysregulated kinases and pathways that have the potential for treating COVID-19. They then narrowed the list down to kinase inhibitors.

“We narrowed in on about a dozen,” Krogan told ABC News, “and we highlighted about six or seven that look particularly potent in a laboratory setting. And we’re very excited now to try and take these into clinical trials.”

Three of those drugs include Senhwa Biosciences’ silmitasertib, which is in clinical trials for bile duct cancer and other malignancies; Eli Lilly’s ralimetinib, a cancer drug being evaluated for ovarian cancer; and Astellas’ gilteritinib, which is used to treat acute myeloid leukemia and marketed under the brand name Xospata.

Researchers at the University of Exeter with colleagues at seven international locations followed 7,798 children at high risk of developing type 1 diabetes from birth, over nine years. The TEDDY Study data was then used to develop an algorithm by combining multiple factors to determine if a child is likely to develop type 1 diabetes. The combined risk score melds genetics, family history, and islet autoantibody counts. It appeared to double current programs to screen newborns to prevent ketoacidosis, a potentially deadly consequence of type 1 diabetes.

A common early symptom of COVID-19 is the loss of taste and smell. It was generally believed that the SARS-CoV-2 virus damaged the cells involved in taste and smell, which was the reason for this loss. Recent research suggests 20-25% of patients report a loss of taste. New research from the Regenerative Bioscience Center at the University of Georgia, however, suggests the damage is not caused directly by the virus, but indirectly by events induced during COVID-19 inflammation. The research found that taste bud cells are not vulnerable to the viral infection, because most do not express ACE2, the cell receptor that the virus uses to enter cells.

Researchers at NYU Langone Health/NYU School of Medicine conducted a study where they injected adenosine into the joints of rodents whose limbs had been damaged by inflammation caused by either traumatic injury or massive weight gain. The biological damage was similar to that seen in human osteoarthritis. Adenosine is typically used to store energy and plays a central role in metabolism. In the rodents, the eight weekly injections stimulated regrowth rates of cartilage tissue between 35% and 50%.

Researchers at the University of California, San Francisco (UCSF) have synthesized a molecule inspired by llama antibodies called nanobodies against SARS-CoV-2. They are approximately 25% of the size of human antibodies and from other animals, and they appear to be the most potent anti-coronavirus compound that has been tested in the laboratory so far. In addition, the nanobodies are extremely stable, which means they can be turned into a dry powder and aerosolized, which would make them much easier to administer than the human monoclonal antibodies being developed by companies such as Sorrento Therapeutics, Regeneron Pharmaceuticals and Eli Lilly.

Why People Have Different Responses to COVID-19

Researchers at McMaster University and the University of Waterloo discovered that ACE2 receptors exist in very low levels in human lung tissue. This challenges the generally accepted belief that the SARS-CoV-2 virus enters cells via ACE2, at least in the lungs. They published their research in the European Respiratory Journal and their findings were independently confirmed by other researchers and published in Molecular Systems Biology.

“Our finding is somewhat controversial, as it suggests that there must be other ways, other receptors for the virus, that regulate its infection of the lungs,” said Jeremy Hirota, co-lead scientist from the Research Institute of St. Joe’s Hamilton and an assistant professor of Medicine at McMaster. “We were surprised that the fundamental characterization of the candidate receptors in human lung tissue had not yet been done in a systematic way with modern technologies.”

“Finding such low levels of ACE2 in lung tissue has important implications for how we think about this virus,” said co-lead Andrew Doxey, professor of Biology at the University of Waterloo. “ACE2 is not the full story and may be more relevant in other tissues such as the vascular system.”

They are now exploring alternate additional infection pathways and why there are different patient responses to infection. To do so, they are using nasal swabs that were collected during COVID-19 diagnoses, which lets them analyze the genes expressed by the patients’ cells. They will correlate positive and negative COVID-19 cases with clinical outcomes and hope to develop predictive algorithms associated with morbidity and mortality.

“It is clear that some individuals respond better than others to the same SARS-CoV-2 virus,” said Hirota. “The differential response to the same virus suggests that each individual patient, with their unique characteristics, heavily influences COVID-19 disease severity. We think it is the lung immune system that differs between COVID-19 patients, and by understanding which patients’ lung immune systems are helpful and which are harmful, we may be able to help physicians proactively manage the most at-risk patients.”