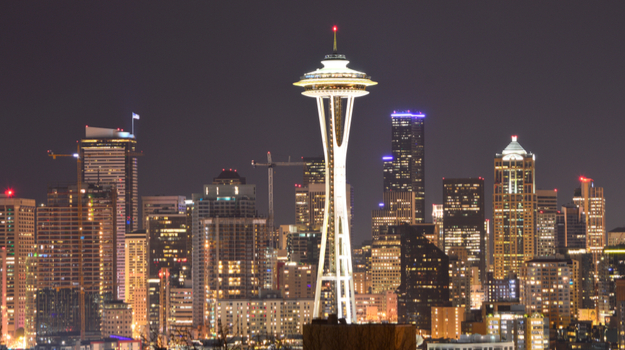 When you think Seattle, biotech and biopharma are not the first things that come to mind. You’re much more likely to think airplanes, coffee and software (Boeing, Starbucks and Microsoft). But a recent report by the U.S. Bureau of Labor Statistics and CBRE Research identified Seattle—which happens to be the BioSpace BioForest Hotbed—as the fastest-growing life science market in the top 10 from 2014 to 2017, with a greater than 17-percent growth.

Last year’s MassBio 2018 Industry Snapshot also found Washington state to have tremendous growth in biotech R&D. Although relatively small compared to the top areas, like California and Massachusetts—specifically the San Francisco and Cambridge areas, respectively—Washington and Seattle are growing tremendously. The MassBio report, for example, noted that Washington had a one-year change in biotech R&D from 2016 and 2017 of 89 percent and a 10-year change from 2008 to 2017 a whopping 167 percent, the highest in the country.

Xconomy hosted a “What’s Hot in Seattle Biotech” conference in June 2018. At the conference, it was pointed out that 2018 began with two major deals associated with Washington and Seattle. The first was a research collaboration between Microsoft and the Fred Hutchinson Cancer Research Center spinout Adaptive Biotechnologies to develop a multi-disease diagnostic test. The second was Seattle’s Juno Therapeutics’ acquisition by Celgene for approximately $9 billion. (Currently, Celgene is being acquired by Bristol-Myers Squibb).

In fact, these collaborations between biotech companies and tech companies to utilize artificial intelligence (AI), machine learning and cloud-based computing in healthcare and drug development are growing on a steady basis. On March 13, Microsoft teamed with Oxford BioMedica, based in London, UK, to use AI and machine learning to increase the yield and improve the purity of Oxford Biomedica’s lentiviral vectors.

One of the speakers at the Xconomy conference was Claudia Mitchell, a biotech executive and entrepreneur. She founded and was the chief executive officer of Universal Cells, based in Seattle, which was sold to Japan-based Astellas Pharma in February 2018 for $102.5 million with attached milestone payments. Universal Cells was only five years old at the time of the sale.

Universal Cells was funded via angel investors and bootstrapping, which Mitchell said was caused by a lack of venture capital for biotech startups in the Seattle region. But it also allowed the company to stay focused and have a successful exit in such a short timeframe.

One strong component for support of life science startups in the Seattle area is the types of supporting academic institutions. This includes the Fred Hutchinson Cancer Research Center, Seattle Childrens Hospital, and the University of Washington Medicine. David Maloney, medical director of the Bezos Family Immunotherapy Clinic at the Seattle Cancer Care Alliance, spoke with BioSpace last year to discuss CAR-T therapies.

These cutting-edge cancer therapies, such as Novartis’ Kymriah (tisagenlecleucel) and Gilead Sciences’ Yescarta (axicabtagene ciloleucel) are only provided as cancer centers that have been certified for it. The Bezos Family Immunology Clinic is one of only 51 certified centers.

On January 11, 2019, Neoleukin Therapeutics spun out of research at the University of Washington Medicine’s Institute for Protein Design with the help of CoMotion, a collaborative innovation hub. The company’s researchers created a protein that mimics the action of IL-2, a key immune regulatory protein, but which is more stable and has fewer side effects. The protein is called Neo-2/15 and Neoleukin plans to further develop it into a drug and test to see if it is an improvement in terms of efficacy and safety than IL-2 for melanoma and renal cell carcinoma.

Another Washington success story is Seattle Genetics. On February 11, 2019, the company announced that it and its collaborator, Takeda Pharmaceutical Company, received approval from the European Commission to extend its approval for Adcetris (brentuximab vedotin) to include the drug in combination with Adriamycin, vinblastine and dacarbazine (AVD) in adults with previously untreated CD30+ Stage IV classical Hodgkin Lymphoma (HL). This prompted a $30 million milestone payment from Takeda. Adcetris is being studied in more than 70 clinical trials in CD30-expressing lymphoma and has been approved for a number of indications in the U.S. and globally.

Late in 2018, Seattle-based Impel NeuroPharma closed on a Series D financing totaling $67.5 million, co-led by KKR and Northwest Venture Partners. Existing investors Vivo Capital, 5AM Ventures and venBio Partners also participated. The money will be used to advance its existing portfolio for central nervous system disorders through the clinic. It has several ongoing trials related to acute migraine, Parkinson’s disease and bipolar I and schizophrenia disorders. It is expecting to release initial data from its Phase III clinical trial of INP104 for acute migraine headache in late 2019.

Although Seattle may not yet be a blockbuster site for biotech startups, it’s growing fast. In Bothell alone, there are currently 61 life science companies, according to Phys.org, with another 106 in Woodinville, Kirkland and Redmond. One of the topics of discussion in the area is the demand for talent. FujiFilm-SonoSite, which manufactures portable ultrasound devices in the region, has had to raise starting wages by as much as 15 percent and added referral bonuses and active recruitment at local colleges. Tom Davidson, director of manufacturing, told Phys.org, that even with all those efforts, it took almost a year of serious overtime and backlogged orders before the company “had a stable workforce.”

Five years ago, the industry in the area was stagnant. But according to Phys.org, “Today, it’s a different story. According to Life Science Washington report, the local sector is booming once again, thanks to a roaring global economy, a health-care industry desperate for cost-saving innovation, and a new generation of products. These range from SonoSite’s compact ultrasound devices to a host of biotech breakthroughs from players like Seattle Genetics, Adaptive Biotechnologies, NanoString Technologies and Juno Therapeutics, which was recently acquired by Celgene for $9 billion.”

Add to that, the sector is adding about 80 new life science companies each year. In 2017, Seattle brought in $577 million in venture capital and another $979 million from the NIH.

Looking for jobs in biopharma? The Seattle area might just be the ticket.