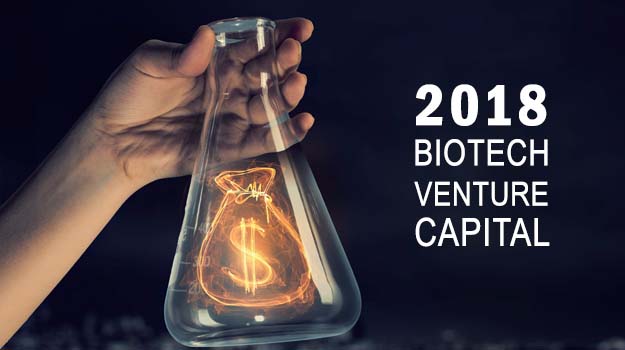 Last year will be a hard act to follow in a lot of ways. It was a banner year for the stock market, with the S&P 500 gaining 19.4%, while the iShares Nasdaq Biotechnology Index ETF (IBB) clocked in with an even more impressive 20.9% gain. But the real star of 2017 was venture capital.

According to data from Pitchbook, funding for biotech and genetics startups topped $10 billion last year. That's not just a record, but a huge jump from the prior high set in 2015, when VCs poured $7.3 billion into biotechs.

The recent successes have fueled new funds from traditional players, and attracted non-traditional firms to the biotech sector. For example, Edinburgh-based Baillie Gifford, which typically does investment on behalf of pension funds, has put over $1 billion into biotech over the past couple of years. And it is making big bets on companies like CureVac, Intarcia., and Denali Therapeutics.

That perfectly illustrates another trend of 2017: Deals were larger in size and fewer in number. In the 2010-2017 period, just 17 biotechs received backing of $200 million or more in a single round. Many of those deals happened in the past couple years. For example, Intarcia is a true unicorn, with its ongoing Series EE round having raised over $600 million despite a setback in approval for its novel diabetes delivery device. Genetics firm 23andMe raised $250 million in September, and WuXi NextCODE received $240 million for its genomics database the same month. Custom microbe company Gingko Bioworks raised a $275 million Series D in December.

So, can this frenzy continue into 2018? While matching 2017's breakneck pace is going to be difficult, the year is off to a good start.

Just days ago, Germany's BioNTech announced it had raised a $270 million Series A round. While this company isn't new—it was founded in 2008—it could turn out to be one of 2018's more significant unicorns. For most of its history, BioNTech has gotten along on angel funding from the Strüngmann Family Office (that is, Andreas Strüngmann, the billionaire founder of Hexal AG). That's been enough for the company to secure partnerships with Genentech, Genmab, Eli Lilly and Company, Sanofi and Bayer Animal Health.

Now BioNTech is looking to accelerate its development of individualized mRNA-based therapies, including a cancer immunotherapy platform that has advanced multiple candidates into the clinic. While the company is unlikely to go public this year, its ease in attracting investment should allow it to move forward quickly.

If there's a final trend to note regarding life sciences venture financing, it is that biotech is becoming increasingly international. We're finding both capital and companies in more parts of the globe –something investors should take note of.