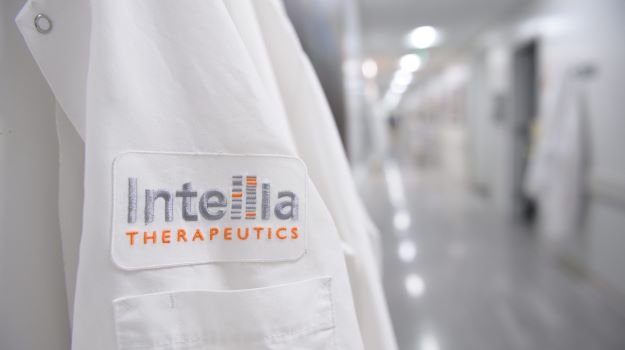 Nearly four months after Intellia Therapeutics – along with partner Regeneron Pharmaceuticals – reinvigorated the CRISPR space with the first-ever clinical evidence that CRISPR gene editing inside the body can be safe and effective, the asset in question has been granted Orphan Drug Designation by the U.S. Food and Drug Administration.

The experimental drug, NTLA-2001, is being developed for the treatment of transthyretin (ATTR) amyloidosis, a life-threatening, rare protein misfolding disorder caused by a specific mutation in the transthyretin (TTR) gene. In the disease pathology, the proteins, which generally dissolve, fold over on themselves, leading to a host of problems, including damage to the nerves (polyneuropathy), kidneys and eyes. Patients can also suffer from cardiomyopathy (ATTR-CM) when the protein mistakenly deposits in the heart. Approximately 50,000 people worldwide are stricken with hereditary ATTR, and the prognosis is bleak, with patients typically succumbing to the illness between 2 and 15 years following the onset of symptoms.

In June, clinical data from Intellia’s Phase I study showed that the disease-causing protein was greatly reduced after a single infusion of NTLA-2001 delivered systemically in vivo (inside the body). The results, published in the New England Journal of Medicine, were based on six patients in the first two cohorts of the study. A single 0.3 mg/kg dose of NTLA-2001 led to an 87% mean reduction in serum TTR, with a maximum 96% serum TTR reduction by day 28. The results were dose-dependent as a lower dose (0.1 mg/kg) led to a reduction of just 52%. For reference, the standard of care treatments such as Alnylam’s Onpattro (patisiran), typically generate TTR reductions of approximately 80%.

The FDA's Orphan Drug Designation is awarded to investigational drugs that aim to treat, diagnose or prevent rare diseases that affect fewer than 200,000 people in the U.S. It gives the drug sponsor certain advantages such as prescription drug user fee exemptions and seven-year marketing exclusivity if and when the drug is approved. NTLA-2001 already enjoys orphan drug designation for ATTR amyloidosis in the EU, which was granted in March by the European Commission (EC).

Intellia’s early summer milestone kicked off a spate of 2021 gene editing breakthroughs. On September 30, Editas Medicine followed with initial data from its Phase I/II BRILLIANCE trial of EDIT-101, which is being developed for a form of inherited blindness called Leber congenital amaurosis type 10 (LCA10). This represented the second evidence of successful in vivo CRISPR gene editing.

Many are pinning their hopes on in vivo gene editing as it has the potential to permanently cure genetic diseases. While still in early stages across the field, these investigational therapies hold the possibility of “one-and-done” treatments for patients who otherwise would either have no viable treatment or be tethered to a lifetime of costly and cumbersome repeat therapeutic administrations.