The two hottest pockets for biotech startups are Cambridge, Massachusetts and the San Francisco Bay Area. Both of these biotech hubs cite proximity to major universities and research institutions that churn out top talent. And both, to some extent, especially the Bay Area, are facing a significant challenge—no room to grow and rising real estate costs. Scott Altick, vice president and market lead for San Francisco at BioMed Realty, sat down with BioSpace to discuss trends for life science startups. 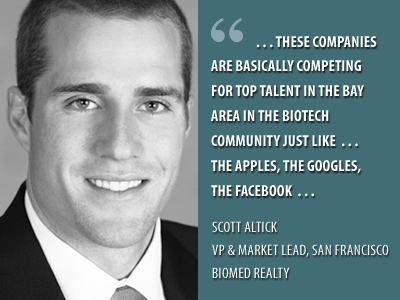 As the price of commercial real estate goes up, developers like BioMed Realty that focus on real estate solutions for the life science community, are re-envisioning their approach to meeting the facility needs of biotech and life science companies in increasingly creative ways.

BioMed Realty was founded in 2004 and currently has 18 million square feet of rental space worldwide, with major holdings in the San Francisco Bay Area, Cambridge, and the U.K. The company has three million square feet in the Bay Area and South San Francisco, which Altick said, is “historically the main nucleus of the biotech industry in the Bay Area, really driven by proximity to the research institutions, Stanford, University of California Berkeley, and the University of California San Francisco.”

BioMed Realty, which was recently acquired by Blackstone Group (BX), is building what is dubbed an “amenity space” in Foster City, Calif. for Illumina . In January 2015, Illumina signed a 15-year lease for a new 360,000 square foot, state-of-the-art, build-to-suit campus, which includes two Class A laboratory and office buildings, as well as the extras that qualify it for the “amenity space” label—a large central quad with an outdoor amphitheater, playing fields, as well as various creative meeting spaces and recreational features.

Altick is careful to emphasize that the phrase “amenity space” tends to minimize the approach. The idea, he indicates, is to get away from a lone facility surrounded by a sea of parking spaces.

“What we mean by this is that these companies are basically competing for top talent in the Bay Area in the biotech community just like they are in the tech community—the Apples, the Googles, the Facebook—and the culture created around their campuses with the amenities they have. It’s just not them having a cafeteria and conferencing area. For us, it’s the future, creating collaborative spaces creatively,” Altick said.

Some of those collaborative spaces involve indoor/outdoor environments, which are, of course, easier to work with in mild climates like California than the colder, more variable weather of Massachusetts and the U.K. 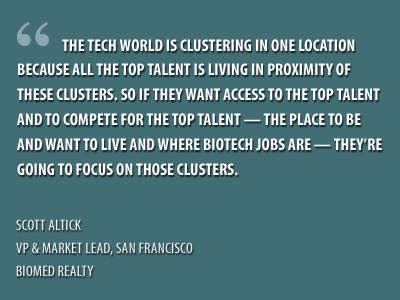 “These are little areas outside that are protected and are good for collaborating outdoors. It’s the kind of a work environment where you don’t want to just be in your cubicle, at your desk, sitting behind your computer screen. It’s out in the open, where you can step out and grab a cup of coffee and sit in one of these nooks in the lobby,” Altick said.

Although part of the rationale is to create a culture of collaboration through creative workspace design, another significantly important component is the need to build an inviting place for top talent to work.

“With this amenities focus, and the kind of talent war between top biotech companies to provide their employees with amenities and access, and all these things that their employees want access to, it’s really competition for top talent that’s causing us to raise the bar and the way we design our facilities and projects, to cater to these amenities and to provide all the little things these companies want to help them recruit and retain top talent,” Altick said.

Does this put financial pressure on these companies—after all, wouldn’t it be cheaper to open a company 40 or 50 miles outside San Francisco, which would cut overhead costs significantly?

“It does put financial pressure on the companies,” Altick said, “but it’s a kind of case-by-case scenario. Speculative building does cost a little more, but companies are willing to pay for that and the work environments being more condensed. Companies are trying to pack more people into a smaller space, so if it’s a smaller price per square foot, they don’t have as many square feet to pay on, right? If they can leverage outdoor areas, for example, it helps them, even though they may be paying more per square foot.”

In addition, when biotech companies choose their site locations, they often take into consideration public transportation. BioMed Realty does try to leverage public systems when it can. The Caltrain system has a main artery on the peninsula, and serves downtown San Francisco down the peninsula to Gilroy, south of San Jose.

The suggestion is that these amenities, which some critics have dismissed as designed to make self-absorbed Millennials happy, aren’t just gimmicks led by developers. The argument is that if you want to be cutting edge in business, being innovative with the company culture is important. In short, making the workplace more than just a workplace isn’t just a perk—it’s a requirement.