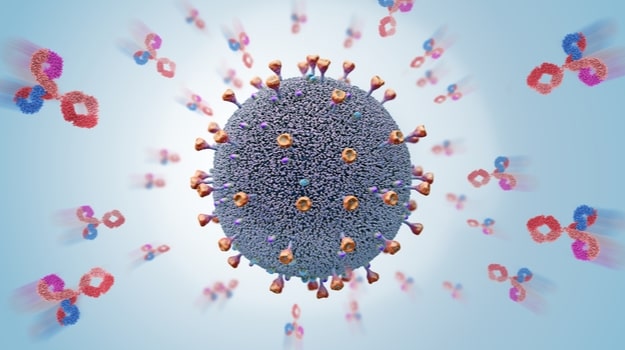 A study out of Washington University School of Medicine in St. Louis found that months after recovering from mild COVID-19, patients maintained antibodies against the SARS-CoV-2 virus. And they believe that the specific cells that produce the antibodies should persist for a lifetime. They published their research in the journal Nature.

“Last fall, there were reports that antibodies wane quickly after infection with the virus that causes COVID-19, and mainstream media interpreted that to mean that immunity was not love-lived,” said senior author Ali Ellebedy, associate professor of pathology & immunology, of medicine and of molecular microbiology. “But that’s a misinterpretation of the data. It’s normal for antibody levels to go down after acute infection, but they don’t go down to zero; they plateau. Here, we found antibody-producing cells in people 11 months after first symptoms. These cells will live and produce antibodies for the rest of people’s lives. That’s strong evidence for long-lasting immunity.”

Their research project track antibody levels in blood samples from COVID-19 survivors. They enrolled 77 participants who gave blood at three-month intervals beginning approximately a month after their initial infection. Only six of the patients had been hospitalized, with the rest having mild cases. They obtained bone marrow from 18 of the participants seven or eight months after the initial infections. Five returned four months later to provide a second bone marrow sample. They also collected bone marrow from 11 people who never had COVID-19. They found that blood antibody levels dropped quickly after infection and leveled off, although some antibodies were detectable 11 months post-infection. Of the 19 bone marrow samples in infected people, 15 contained antibody-producing cells that targeted the virus. They were still identified four months later in the five people who provided a second bone-marrow sample.

Why Our Skin Isn’t Constantly Inflamed

Our skin is constantly exposed to environmental factors like bacteria, viruses and fungi, but our skin is not constantly inflamed. Researchers out of the University of California San Diego School of Medicine identified two enzymes that protect our skin and body’s overall health from these pathogens, while not triggering a constant immune and inflammatory response. The enzymes are called histone deacetylases (HDACs), and they inhibit the inflammatory response in the skin. The enzymes act on the chromosomes of specific skin cells that provide immune tolerance for the skin. Otherwise, said Richard Gallo, the Ima Gigli Distinguished Professor of Dermatology and chair of the Department of Dermatology at UCSD School of Medicine, “we’d have a constant rash on our skin.”

Scientists at Brigham and Women's Hospital analyzed data from almost 144,000 women that they followed for up to 34 years as part of the Conservation of Hearing Study (CHEARS). They found that the risk of moderate or worse hearing loss was up to 40% in participants with osteoporosis or low bone density (LBD). They analyzed data from the Nurses’ Health Study (NHS) and NHS II, which were established in 1976 and 1989, respectively. The mechanisms are not clear, but they suggest that abnormal bone remodeling and changes in the pathways that maintain bone homeostasis might influence the bone that protects the nerves and hearing infrastructure or possibly change ion and fluid metabolism in the cochlea, the primary structure involved in hearing.

Smartwatches, such as the Apple Watch, Fitbit and Garmin, are capable of collecting a lot of information, including pulse, activity, sleep, oxygen levels, etc. Researchers at Duke University and the Stanford University School of Medicine published a study that used machine learning and data collected on smartwatches on 54 patients over three years and compared the data to traditional measurements collected during clinic visits, including heart rate, temperature, red and white blood cell count, glucose levels, and iron levels. They demonstrated there were multiple connections between the smartwatch data and clinical blood tests. Currently the smartwatch data isn’t specific enough to accurately predict the precise number of blood cells, but they found enough correlations to act as proof-of-concept that physicians might someday be able to use wearable data to immediately get a picture of a patient’s overall health even before the clinical lab results are returned.

A Small Molecule to Rejuvenate the Alzheimer’s Brain

Researchers at the Netherlands Institute for Neuroscience (NIN) believe they have identified a small molecule that can rejuvenate the brain and fight memory loss in Alzheimer’s patients. Recent research identified adult-born cells in the hippocampus of elderly people. This suggested, broadly, that adult neurogenesis—the creation of new brain cells in adults—continues through life. Adult neurogenesis sharply decreases in the brains of Alzheimer’s patients; but higher levels of adult neurogenesis was associated with better cognitive performance. They published their research in the journal Cell Stem Cell.

“Seven years ago, while studying a small RNA molecule that is expressed in our brain, called microRNA-132, we came across a rather unexpected observation,” said Evginia Salt, group leader at the NIN. “This molecule, which we had previously found to be decreased in the brain of Alzheimer’s patients, seemed to regulate homeostasis of neural stem cells in the central nervous system.”

At that point, it was thought that Alzheimer’s only affected mature neuronal cells, so the finding did not seem to have a role at that time in Alzheimer’s progression. They worked to determine if the microRNA-132 could regulate adult hippocampal neurogenesis in healthy and Alzheimer’s brain, working with mouse models, cultured human neural stem cells and postmortem human brain tissue. They discovered that the microRNA-132 was necessary for neurogenic processes in the adult hippocampus. What this means is it is a proof-of-concept for the therapeutic potential for adult neurogenesis in Alzheimer’s. Their next step is to evaluate the efficacy and safety of targeting microRNA-132 as a therapy for Alzheimer’s.