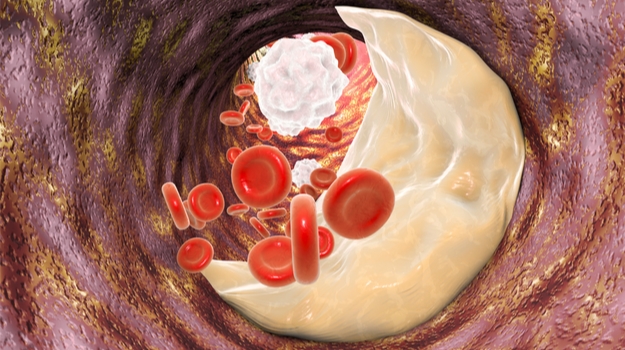 Bryan Smith, an associate professor of biomedical engineering at Michigan State University and associates at Stanford University, developed a type of nanoparticle that can “eat debris” related to the plaques that cause heart attacks. They dub it a type of Trojan Horse and believe it has the potential to treat atherosclerosis, a top cause of death in the U.S. The research was published in the journal Nature Nanotechnology.

Atherosclerosis is hardening and narrowing of the arteries, which can lead to heart attack or stroke. The plaques are made up of fat, cholesterol, calcium and other substances in the blood.

Smith’s nanoparticles are based on single-walled carbon nanotubes that are loaded with a chemical inhibitor of the antiphagocytic CD47-SIRPα signaling axis. In other words, the nanoparticle targets atherosclerotic plaques because it has a high affinity to a particular type of immune cell, monocytes and macrophages. Once the nanoparticle is inside the plaque’s macrophages, it delivers the drug that causes the cell to engulf and eat cellular debris.

“We found we could stimulate the macrophages to selectively eat dead and dying cells—these inflammatory cells are precursor cells to atherosclerosis—that are part of the cause of heart attacks,” Smith said. “We could deliver a small molecule inside the macrophages to tell them to begin eating again.”

This is because Smith’s research is built on identifying and intercepting the macrophage receptor signals and using a small molecule from its nano-immunotherapeutic platforms to send messages. Other research interacted with molecules on the cell surface, but this approach works intracellularly.

The investigators believe the technology has applications beyond atherosclerosis.

“We were able to marry a groundbreaking finding in atherosclerosis by our collaborators with the state-of-the-art selectivity and delivery capabilities of our advanced nanomaterial platform,” Smith said.

He went on to add, “We demonstrated the nanomaterials were able to selectively seek out and deliver a message to the very cells needed. It gives a particular energy to our future work, which will include clinical translation of these nanomaterials using large animal models and human tissue tests. We believe it is better than previous methods.”

Current treatments for atherosclerosis include lifestyle changes such as heart-healthy diets, losing weight, managing stress, exercise and quitting smoking. Decreasing blood cholesterol levels using drugs, such as statins, are often used, or in extreme cases, PCSK9 inhibitors. If it becomes severe enough, there are several medical procedures such as coronary angioplasty, which opens blocked or narrowed cardiac arteries, or surgery such as coronary artery bypass grafting (CABG) or carotid endarterectomy, which is surgery to remove the plaque buildup in the carotid arteries in the neck.

Smith has filed a provisional patent for the nanoparticle device and expects to begin marketing it later this year.