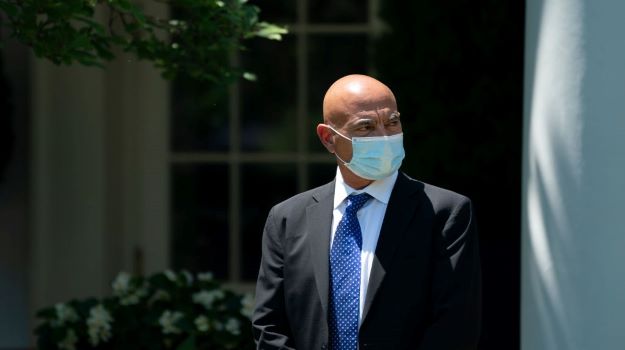 Moncef Slaoui, who served as chief scientist for the Operation Warp Speed response to the COVID-19 pandemic under former President Donald Trump, was fired as chairman of the board of directors of Galvani Bioelectronics following the "substantiation" of allegations of sexual harassment and inappropriate conduct.

What Does GSK says about Moncef Slaoui?

In its announcement, GSK said the decision to terminate Slaoui, who retired from GSK in 2017 after 30 years with the company, was made following receipt of a letter containing the allegations against the vaccine expert. The alleged incident occurred several years ago when Slaoui was still an employee of GSK, the company said.

“Dr. Moncef Slaoui’s behaviors are wholly unacceptable. They represent an abuse of his leadership position, violate company policies, and are contrary to the strong values that define GSK’s culture. The company expects everyone at GSK to behave in accordance with its values, especially its leaders where its standards are the highest. Sexual harassment and any abuse of leadership position are strictly prohibited and will not be tolerated,” GlaxoSmithKline said in its statement.

GSK Chief Executive Officer Emma Walmsley said she was shocked and angry about Moncef Slaoui’s actions. In an open letter to the company, Walmsley said sexual harassment will not be tolerated at GSK. Further, she said Slaoui’s name will be removed from the company’s vaccines research site in Rockville, Maryland. It had been known as The Slaoui Center for Vaccines Research, but that will soon change, CNBC reported.

“Since February, the highest levels of our company have been working to understand and address what happened. Protecting the woman who came forward and her privacy has been a critical priority throughout this time. This will continue,” Walmsley wrote in the letter, according to CNBC. “I respect and admire her courage and strength. I’ve spent many nights lately putting myself in her shoes. More than anything, this simply should not have happened.”

Galvani Bioelectronics is a medical research company focused on the development of bioelectronic medicines to treat chronic diseases. Galvani was formed in 2016 through a partnership between GlaxoSmithKline and Verily Life Sciences, a division of Google’s parent company, Alphabet Inc. Galvani Bioelectronic medicine’s vision is to employ the latest advances in biology and technology to interpret this electrical conversation that takes place between the body’s organs and central nervous system, and to correct the irregular patterns found in disease states, using miniaturized devices attached to individual nerves.

Slaoui has served as chairman since the formation of the company. Moncef Slaoui retired from his role at GSK, which included heading the company’s vaccines research, as well as global research & development. He was tapped by the Trump administration in 2020 to head up Operation Warp Speed during the early days of the COVID-19 pandemic. He resigned from that role in January following the inauguration of President Joe Biden. He received a total of $1,000 from the federal government for the months he spent working at Operation Warp Speed. He previously said he intended to donate that money to scientific research.

Moncef Slaoui also previously served on the board of directors of Moderna. He stepped down from that role last year after joining Warp Speed and also sold his shares in the company in order to avoid conflicts of interest. He kept the shares he accumulated in GSK over his 30 years of service.