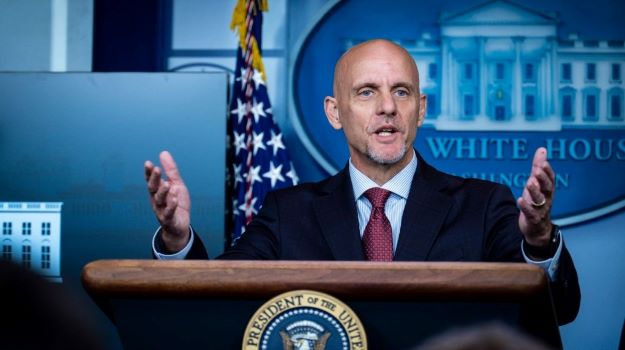 It was reported yesterday that Operation Warp Speed, the Trump administration’s program to develop and distribute a COVID-19 vaccine, was considering cutting doses of the Moderna vaccine in order to have more doses to distribute.

The U.S. Food and Drug Administration (FDA) came out to warn health care personnel not to make any changes to the dosing of the vaccines and that doing so would place the public health at risk and undermine “the historic vaccination effort to protect the population.”

In an interview on Sunday with CBS’ “Face the Nation,” Moncef Slaoui, Operation Warp Speed’s chief scientific adviser, said they were considering decreasing the doses in people between the ages of 18 and 55, because there is some evidence that the lower dosage in that age group provides “identical immune response” to the recommended 100 microgram dose. Warp Speed was apparently in talks with Moderna. But he said it will be up to the FDA to decide.

“It will be based on facts and data to immunize more people,” he said to CBS, adding, “of course we continue to produce more vaccine doses.”

Operation Warp Speed and the Trump administration has taken a lot of criticism for the rollout of the vaccine. At this time, Operation Warp Speed has indicated its goal is to ensure that 80% of the 330.7 million Americans get injections by late June. To do that, more than 3 million people will have to be jabbed each day. Two weeks ago, they were averaging about 200,000 people per day, and over the last few days that has ramped up to about 500,000 per day. That’s still a long way from 3 million per day, but it shows signs of improvement.

Currently, the issue does not appear to have anything to do with supply of the vaccine, but distribution to states and and health care providers to actually getting the vaccines into people’s arms. There is a myriad of reasons for the slow scale-up. Part of it was simply holidays, already overworked health care systems, three major snowstorms and lack of funding to states. The U.S. health care system is also fragmented, for-profit, with no centralized decision-making. Much of the on-the-ground distribution is being handled by states’ public health systems, which are notoriously underfunded, and the federal funding to the states for vaccine distribution has been minimal and slow.

The FDA indicated that the suggested changes to the dosing schedule are “premature and not rooted solidly in the available evidence.” In addition, the agency pointed out that during the clinical trials, only a relatively small number of volunteers who did not received their scheduled doses were followed “for a short period time, such that we cannot conclude anything definitive about the depth or duration of protection after a single dose of vaccine from the single dose percentages reported by the companies.”

In the agency’s statement by Commissioner Stephen Hahn and Peter Marks, who heads the agency’s vaccine division, they noted that it was reasonable to consider reducing the number of doses or extending the length of time between doses or even mixing and matching vaccines in order to immunize more people against COVID-19.

However, they noted that, “Without appropriate data supporting such changes in vaccine administration, we run a significant risk of placing public health at risk.”

Hahn and Marks wrote, “What we have seen is that the data in the firms’ submissions regarding the first dose is commonly being misinterpreted. In the Phase III trials, 98% of participants in the Pfizer-BioNTech trial and 92% of participants in the Moderna trial received two doses of the vaccine at either a three- or four-week interval, respectively. Those participants did not receive two vaccine doses at either a three- or four-week interval were generally only followed for a short period of time, such that we cannot conclude anything definitive about the depth or duration of protection after a single dose of vaccine from the single dose percentages reported by the companies.”

U.K. health officials reportedly are allowing more than 21 days between doses of the Pfizer-BioNTech vaccine and has indicated it may consider letting people get vaccinated with two different vaccines. Both Hahn and Marks said that will not happen in the U.S. At this time, the Pfizer-BioNTech and AstraZeneca-University of Oxford vaccines have been authorized in the UK. The Moderna vaccine is being evaluated in the UK. In the U.S., the Pfizer-BioNTech and Moderna vaccines have been authorized, but the AstraZeneca-University of Oxford vaccine has not and is unlikely to until late spring.

Paul Offit, an infectious disease specialist at the University of Pennsylvania, told CNN, “There’s no data on efficacy of a half dose. If you use a half dose, you’re just making it up. You’re just hoping that you’re right. Why would you dare to make up something when you don’t know whether or not it works?”