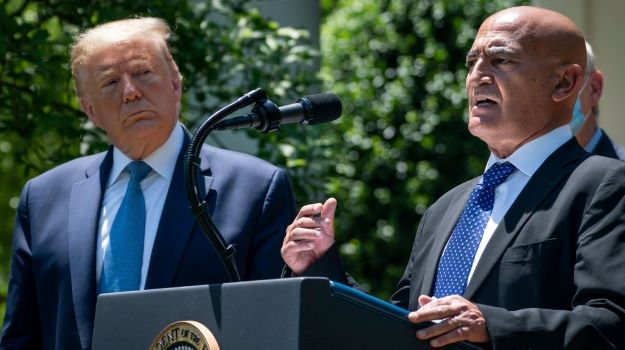 Operation Warp Speed, the Trump administration’s program to accelerate COVID-19 vaccine development and distribution, succeeded on the development component, but is failing in the early stages of distribution. The program’s goal was to have 40 million doses, enough for 20 million people to be fully vaccinated, by the end of the year—tomorrow. To date, about 11.4 million have been distributed and about 2.1 million have been administered.

Moncef Slaoui, the scientific head of Operation Warp Speed, agreed, saying that the scaling up of the immunizations “is slower than we thought it would be.”

And as has been typical during the entire pandemic, the rollout became a political hot button issue. President-Elect Joe Biden attacked the Trump administration for “falling short,” adding, “We are grateful to the companies, doctors, scientists, researchers and clinical trial participants and Operation Warp Speed for developing the vaccines quickly. But as I long feared and warned, the effort to distribute and administer the vaccine is not progressing as it should.”

President Trump lashed out on Twitter, passing the buck, tweeting that it is “up to the States to distribute the vaccines” and repeating a false claim that Biden “failed with the Swine Flu.”

The White House then stated accurate information that nonetheless did not address the current issue, stating, “Nearly 20 million first doses have been allocated to States for immediate delivery and administration at their direction, and this process is progressing rapidly. Hundreds of millions of doses have been delivered over the months to come.”

As NBC News noted, at the current rate of inoculations, it would take almost a decade to inoculate enough Americans to control the pandemic.

What is the Projection of Operation Warp Speed?

Operation Warp Speed stated goal is to ensure that 80% of the 330.7 million Americans get injections by late June. To do so, more than 3 million people would have to be jabbed each day. Currently, the U.S. is averaging about 200,000 people per day.

Scott Gottlieb, former Commissioner of the U.S. Food and Drug Administration (FDA) under Trump and currently a Pfizer board member, told CNBC yesterday, “I don’t think we’re going to be able to distribute the 20 million doses that were promised” this year.

He noted, for example, that Georgia just began vaccinating nursing homes on Monday, while the Pfizer-BioNTech vaccine has been authorized for three weeks. “So we’re late getting into some of these facilities.”

Some of the issue clearly is related to states have problems distributing the vaccines, but many states found they did not receive the expected numbers of vaccines, an issue that General Gustave Perna, who runs Operation Warp Speed’s logistics, has repeatedly apologized for. Another problem is simply the nature of the U.S. health care system—for-profit, fragmented, with no centralized decision-making. This has been a problem from the very beginning, with issues with testing and the manufacturing and distribution of personal protective equipment (PPE) for health care workers.

Anthony Fauci, director of the National Institutes of Allergy and Infectious Diseases (NIAID), told CNN that, “I believe that as we get into January, we are going to see an increase in the momentum,” and hopes that it will be enough to “catch up to the projected pace that we had spoken about a month or two ago.”

Trump vowed in September that Operation Warp Speed would ship 100 million doses by the end of the year. Then Slaoui in December cut that back to 20 million.

The project will undoubtedly pick up speed as all the logistics get worked out.

Brett Giroir, the Trump administration’s COVID-19 testing czar and assistant secretary of Health and Human Services, told NBC News that the 2 million number given is “an underestimate,” but that they won’t hit the goal of 20 million.

“Again,” he said, “we were over the Christmas break last week, even for hospitals that slows things down. And it’s only 15 days since the first vaccines were given. We want to do it faster. I’d love to have everybody vaccinated by now. We’ll have another 30 million doses in January, another 50 million doses in February, and that’s going to add up pretty quickly into impact, particularly in our vulnerable communities.”