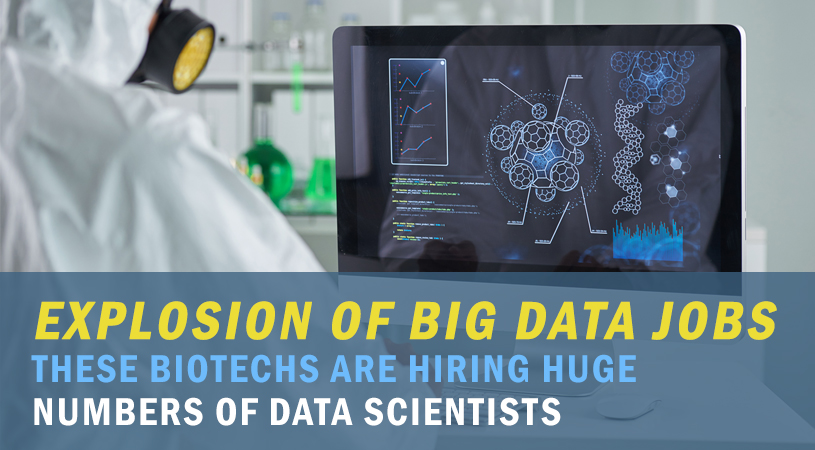 The term big data is generally used to describe—this will come as a shock—large volumes of data, both structured and unstructured. It can include all of the data generated across an enterprise such as sales figures, website clicks, etc. But in terms of biopharma, big data increasingly means enormous amount of genetic data as well as other biological information.

And the biopharma industry is in need of data scientists. You could even say the demand is … huge!

A post in Quora by Aditya Basrur provides a list of nine areas in biotechnology where data scientists are employed. It’s probably just the tip of the data iceberg in biotech. They are:

In a recent survey published by Robert Half called the 2017 Technology & IT Salary Guide, data scientists in 2017 are expected to have salaries that range from $116,000 to $163,500 this year, up 6.4 percent from last year. Big data engineer salaries go even higher, ranging from $135,000 to $196,000. Other related hot jobs are network security engineer, web development and software development.

A Few Other Areas

A few other areas that are increasingly looking for data scientists include:

This is an area that’s just ramping up. The human microbiome is basically the trillions of microbes, bacteria, viruses and fungi that live inside the body or on the body. Increasingly, scientists are finding out that they often play an important part in our health. And it’s not just gut bacteria either.

Researchers at Ohio State University described the affect the gut microbiome has on spinal cord injury. And researchers at the California Institute of Technology identified a functional link between intestinal bacteria and Parkinson’s disease.

Late last year, IP Group (IPO), with Cambridge Innovation Capital, spun out a new company from the Wellcome Trust Sanger Institute called Microbiota and established labs within the Wellcome Genome Campus at Hinxton, Cambridge (UK). With an initial funding of 8 million British pounds, Microbiota will focus on the role the microbiome plays in cancer, infections, and metabolic, neurological disorders.

And data scientists are needed to help sort out and make sense of the trillions of different organisms involved, how they interact, and to work with DNA and RNA that drives all of it.

Pharmaceutical companies sometimes abandon drugs. They fail in early development, or sometimes even in Phase II and Phase III trials. Increasingly, researchers are sifting through the molecular data—with the help of data scientists—to identify subpopulations where the drugs might work, or to further ascertain why the drugs failed.

Google is all about data—sorting it, arranging it, analyzing it and selling it. And the very first of its standalone companies under the Alphabet umbrella, Verily, focuses on life sciences. Among the many things Verily is focused on is developing various biological data monitors. Working in an area called nanodiagnostics, Verily is working on a baseline project that utilizes big data to assimilate all of an individual’s genetic and healthcare data.

It was recently announced that the Chan-Zuckerberg BIOHUB is hiring scientists—including data scientists, computer scientists, engineers, mathematicians, and physicists. One of the Chan Zuckerberg Initiative’s projects is the Human Cell Atlas Project, which has the goal of defining “all of the cell types in the human body, their location, their numbers, their neighbors, and their molecular composition.”

Where the Jobs Are

Want to know where some of the data science jobs in biopharma are? Here’s some examples.

This global biopharmaceutical company is a big player in the oncology market. A current job opening is for the Director of Bioinformatics, and the company is looking for someone with a PhD in bioinformatics, biostatistics, or computational biology.

Located in Berkeley, California, this company is looking for a Computational Scientist/Bioinformatician, someone with a PhD in statistics, biostatistics, computer science or bioinformatics. A big part of the job is analyzing “large-scale datasets such as raw microarray data (miRNA and mRNA), genomic and RNA sequence data, cytometry and proteomics data for clinical or basic research purposes.”

The leading player in next-generation DNA sequencing technology is definitely going to have bioinformatics and data scientist jobs available on a regular basis.

Located in Boulder, Colorado, Somalogic has a job opening for a Director/Senior Director of Biostatistics & Bioinformatics. Somalogic focuses on proteomics technology that is capable of measuring thousands of different proteins. They’re looking for someone with a Master’s degree or PhD in biostatistics, epidemiology or a related field.

Big data has been identified for the 3Vs: volume, velocity and variety. Sometimes, two more dimensions are added to the 3Vs (alas, only one starts with V): Variability and Complexity.

Whatever the factors, Big Data is big, and there are plenty of exciting opportunities for Data Scientists in biopharma.