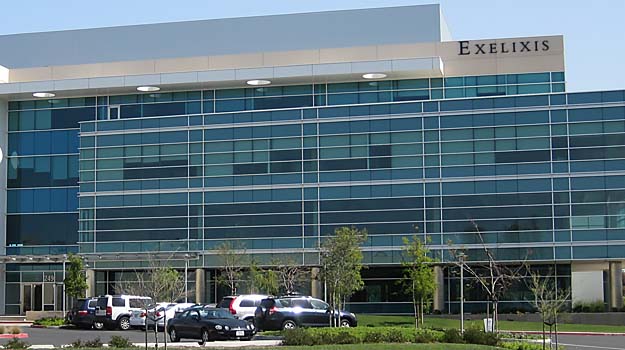 Flush with cash from the growing success of its chemotherapy drug, Exelixis dropped $100M on two collaboration deals this week to invest in promising early clinical assets.

Exelixis has been investing heavily over the last few years in antibody-drug conjugates to add dimension to its cancer-fighting offerings. ADCs have experienced rapid success as a substitute for conventional cancer treatments thanks to lower off-target effects and significant cytotoxicity at tumor levels.

14 ADCs are currently approved by the FDA.

However, some patients can’t handle antigen-targeted therapies like ADCs. That’s where Cybrexa’s CBX-12 comes into play.

Instead of targeting a protein on the tumor cell, CBX-12 utilizes a novel tumor-targeting mechanism. The first-in-class peptide-drug conjugate recognizes the lower pH conditions in the tumor microenvironment to attach to the cancerous cells. The PDC then inserts its payload of exatecan, a potent topoisomerase inhibitor that disrupts DNA replication of the tumor cells.

CBX-12 has already shown promise in an ongoing Phase I trial for metastatic solid tumors.

The Phase I trials is a “basket trial,” Per Hellsund, president and CEO of Cybrexa, told BioSpace.

“We're recruiting a number of patients, with a number of different tumor types,” he said. “We have had ovarian patients. We've had breast patients who have we've seen nice activity and also a number of other tumor types. The objective at this point is really to look at safety and tolerability and identify our recommended Phase II dose.”

He declined to comment on a timeline, but Hellsund said CBX-12 has applicability across a broad spectrum of solid tumors. The company plans to investigate testing the PDC as both a monotherapy and combination treatment.

The deal with Exelixis brings in $60 million upfront for Cybrexa, with the potential for future payouts of up to $642.5 million, should Exelixis choose to move forward with licensing and commercialization.

Hellsund plans to use the funding to “fully develop and exploit CBX-12 in the clinic” and add around 10 new employees to the current headcount of 24.

Exelixis’ second deal adds to its efforts to address the myeloid macrophage component of the tumor microenvironment.

Fronting $40 million to Netherlands-based Sairopa, the company will have the option for exclusive, global rights to ADU-1805. The candidate is a monoclonal antibody that targets signal regulatory protein alpha, SIRPα, to improve the immune system’s ability to attack tumors.

The SIRPα-inhibitor approach caught the eye of Boehringer Ingelheim six years ago. In a billion-euro plus deal, the pharma giant partnered with French company, OSE Immunotherapeutics, to develop its SIRP-alpha antagonist targeting myeloid lineage cells.

OSE received a milestone payment earlier this year after some positive Phase I results.

ADU-1805 has the potential to be a best-in-class drug as it’s active against all human alleles of SIRPα. This opens the door for multiple solid tumor types without requiring patients to be genotyped as BI antibody treatments do. It could also be used both as a monotherapy and in combination with other therapies or immune checkpoint inhibitors.

Sairopa looks forward to an additional $70 million in near-term milestone payments. Exelixis can then drop another $225 if it wishes to exercise its option for the drug after the completion of prespecified clinical studies.

ADU-1805 is on track for IND filing in the first quarter of next year.

Both collaborations have the potential to add promising options to Exelixis’ cancer-fighting portfolio.

Michael Morrissey, CEO, called the framework on these deals “ideal” to allow the company to “only pay for success if and when the data is available” in the company’s Q3 earnings call.