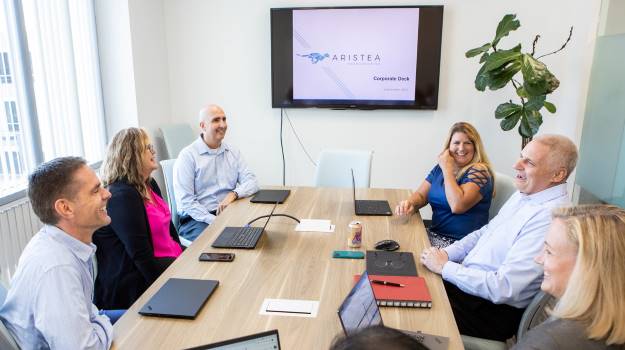 Aristea Therapeutics is on a rescue mission. The San Diego-based immunology company is using its considerable expertise and experience to locate and develop molecules where the mechanism of action has either been proven or makes sense.

Of particular focus for Aristea, which spun out from AstraZeneca in 2018, is finding valuable therapeutics for rare inflammatory diseases. One such indication is palmoplantar pustulosis (PPP), a rare, chronic inflammatory skin condition for which there is no approved therapy in the United States. It causes outbreaks of treatment-resistant sterile neutrophil-filled pustules on the palms of the hands and/or soles of the feet. The company’s lead asset, RIST4721, which was licensed from AstraZeneca, is an oral CXCR2 antagonist currently being investigated in a Phase II proof of concept study for the treatment of this debilitating condition.

This is a molecule with which James Mackay, Ph.D., Aristea’s founder, president and CEO, was already very familiar.

“I was in the portfolio review meeting when [AstraZeneca] made a strategic decision to terminate the development of that program,” he told BioSpace. The British-Swedish multinational felt it was strong enough in the respiratory space and made the decision to divert funds elsewhere. “At that point, I made a mental note of the molecule, because we already knew that it did what it was meant to do in humans. It stops neutrophils trafficking from the bone marrow to the site of inflammation, wherever that's located in the body. So really, it was a drug searching for a disease.”

So Aristea went off in search of indications where neutrophils are the key mediating cell of the disease and identified a group of diseases called neutrophilic dermatoses (inflammatory skin conditions), and further narrowed that down to PPP. In a proof of concept study, Mackay shared that they saw “some nice activity, particularly in patients who were actively flaring as they were coming into that trial.”

Aristea is now moving into a Phase IIb dose-ranging study of 156 patients across three arms. Mackay said the first patient is on pace to be treated with RIST4721 within the next few weeks, with results expected around the middle of 2023.

Since closing a $63 million Series B financing round in July 2021, Aristea has grown from its original four team members to ten. And the company is quite comfortable remaining this size, operating with an outsourcing model.

“Our goal is not to grow the organization but to keep it small and nimble and focused and pulling the expertise wherever we need to do that,” Mackay said. “We’re drug developers by heart. We've been involved in 14 drug approvals between us in our career, so we really know how to develop drugs.”

Chief Medical Officer Nihar Bhakta, M.D. has held leadership positions at Ardea Biosciences, which was acquired by AstraZeneca, Bristol Myers Squibb and Roche. Focusing on inflammation and autoimmunity, Executive Medical Director Fabio Magrini, M.D. has led clinical development teams across rheumatology, dermatology and neuroimmunology, and Stacy Anthony, senior director, clinical operations, was instrumental in bringing a product to approval at Orexigen. Mackay himself served as president and CEO of Ardea following the acquisition by AstraZeneca and has been intricately involved in the approvals of six drugs across multiple therapeutic areas.

It’s this experience that endows the team with a sixth sense to identify diamonds in the rough.

“Our aim here is to take molecules that have been discarded by big pharma for a variety of reasons, or from other biotechs who have taken them through preclinical development but are not equipped to take them into clinical,” Mackay said. Then, the team goes “back to basic science” to search for diseases where those assets can be repurposed.

The objective then is to ensure they follow through on the programs. “Our goal is to really generate good drug development plans and good data that will then allow the molecule to either progress in our hands or allow a big pharma to come along and pick that up,” he said.

One company that has already expressed interest – in the form of a $70 million investment – is San Diego neighbor Arena Pharmaceuticals. In July, Aristea and Arena entered into a strategic collaboration for the clinical development of RIST4721. Aristea received a $60 million upfront payment along with a $10 million equity investment in the Series B financing. In return, Arena scored an exclusive option to acquire Aristea and its CXCR2 programs following the Phase II study in PPP.

Besides PPP, Aristea is exploring the potential of RIST4721 in Familial Mediterranean Fever, a genetic condition leading to high fever and inflammation of the abdomen, lungs and joints, and Behcet's disease, a rare disorder that causes blood vessel inflammation throughout the body. In both of these illnesses, Mackay said there is “strong evidence that neutrophils play a key mediating role.”

In addition, Aristea and Arena will be exploring two other neutrophil-mediated diseases: hidradenitis suppurativa (HS) and inflammatory bowel disease (IBD), which is Arena’s area of expertise. With five indications running in parallel this year, 2023 is shaping up to be huge for Aristea. Mackay shared that data is expected from each program during the first half of ’23.

Aristea is currently looking at a range of immunology-based assets to bring into the portfolio, Mackay said, adding that the company has agreed to a term sheet with one company and is in the process of negotiating an additional 2 to 3 sheets over the coming weeks.

Being president and CEO of a company with this particular model, Mackay commented on the virtual nature of the J.P. Morgan Healthcare Conference over the past two years.

“I've never been keen on rushing about between hotels and pouring rain, so I think it actually worked really well last year and is a very efficient way of doing it now that everyone's used to working virtually,” he said. In fact, when Aristea closed the option-to-acquire deal with Arena, it did so without the benefit of a single physical face-to-face meeting. Mackay shared that during one key meeting with an important investor, the man’s young son walked into the room with a book. Across the virtual universe, the Aristea team joined in for storytime.

“It was one of the was one of the most beautiful moments of the pandemic shutdown, because it just showed how we’ve become so much more focused on the human side of our lives rather than just the work side.”