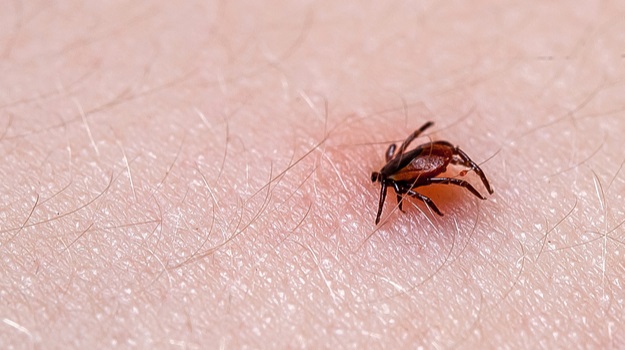 Lyme disease is the most common tick-borne disease in the U.S. There are approximately 300,000 cases diagnosed each year. Yet it is a disease that affects people very differently and often stymies both diagnosis and treatment.

CMRubinWorld writes, “When two different people are infected with Borrelia burgdorferi (the microbe that causes Lyme disease), one will resolve the disease quickly after a course of antibiotics while the other may develop a chronic relapsing remitting illness. Why? Because one person might have gotten a more persistent strain, while the other received a less invasive strain that stays localized to the skin. Additionally, the genetic differences in the human determines how the immune system responds to the invading microbe. Understanding the genetics of the infection and of the human host allows scientists to unravel the mysteries of tick-borne illnesses.”

Which is where advances in gene sequencing comes into play. It’s enabled scientists to identify different strains of Borrelia burgdorferi, in additional to new tick-borne diseases. Examples include Borrelia miyamotoi, Borrelia mayonii, and the Heartland virus.

Physicians may recognize symptoms related to Lyme disease, but find that the patient tests negative on the blood tests, and blame the test sensitivity. But in some cases, tests for Borrelia miyamotoi, for example, might be the answer. The patient has a Lyme-like disease, but not Lyme disease.

As the Centers for Disease Control and Prevention (CDC) notes, “In a 2015 case series, patients with this infection were most likely to have fever, chills, and headache. Other common symptoms included body and joint pain and fatigue. Unlike Lyme disease, rash was uncommon, presenting in only four out of 51 patients.”

In the case of B. miyamotoi, patients were usually successfully treated with a two-to-four- week course of doxycycline, although amoxicillin and ceftriaxone have also been used.

CMRubinWorld notes a case in 2014 published in the New England Journal of Medicine about a 14-year-old boy who had three hospitalizations over four months, more than 100 diagnostic tests, and spent 44 days in an intensive care unit for encephalitis of unknown etiology. He even had a brain biopsy and been placed into a medically induced coma. “Eventually, Dr. Charles Chiu at UCSF employed NGS (next-generation sequencing) analysis of more than 8 million sequences with a bioinformatics pipeline (SURPI) for the detection of all known pathogens. The cause of the boy’s meningoencephalitis was revealed as Leptospira santarosai. He had likely acquired it in Puerto Rico, as it is not present in the continental United States.”

He was given appropriate antibiotics and was discharged two weeks later and went to rehab.

CM Rubin interviewed Brian Fallon, director of the Lyme and Tick-Borne Diseases Research Center at Columbia University Medical Center. In 2017, Fallon and Jennifer Sotsky, a physician-resident at Columbia with a specialty in narrative medicine—published “Conquering Lyme Disease: Science Bridges the Great Divide,” which describes how science and technology are making headway in diagnosing and treating Lyme disease and other tick-borne illnesses.

At one point, Rubin asked, “The general public has more access to information than ever before about Lyme disease from websites, medical organizations, articles and social media. Everyone can be their own ‘expert’ or even their own ‘doctor.’ Can you speak about the pros and cons of online health data in the era of fake news?”

Fallon notes that, “This obviously is a huge area of concern. Individuals used to turn to their physician or to the medical information books, such as the Merck Manual. Now, they turn to the web.”

He describes a 2016 survey found that more than half of 730 patients who checked the web for health information experienced increased distress as a result. “We also learned from this survey,” he said, “that individuals who did not have a health education were more likely to spend more time on the web and were thus prone to develop more anxiety than those who were better educated from a health perspective. While some of the information they find may be accurate, other information may be well-intentioned but ill-informed, misleading, and even harmful.”

But advances in screening, diagnostics and databases have improved the possibility of an accurate diagnosis and treatment—if the physicians are willing to do so. Particularly with tick-borne diseases like B. miyamotoi that present general symptoms like fatigue, achiness, and headache, but show no telltale rash. Many of the symptoms of Lyme are associated with other things, including chronic fatigue syndrome and depression, or a viral infection or the flu.

In terms of prevention, people should be aware of environments where they may be exposed to ticks, such as the woods or tall grass, and if they have been bitten by a tick, to remove it safely as quickly as possible. Researchers have found that it often takes up to 60 hours after a tick bite for the bacteria and viruses that cause tick-borne diseases to transfer. So, getting rid of the ticks as soon as possible can help minimize the risk of infection.