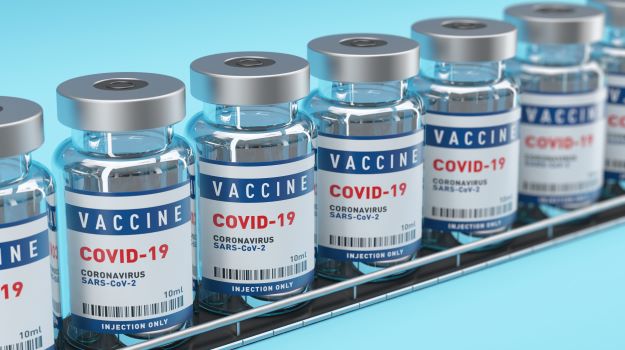 With the U.S. Food and Drug Administration’s vaccines advisory committee meeting being held today to discuss the Johnson & Johnson vaccine and blood clotting, there’s even more interest in what’s going on in the pandemic than usual. Here’s a look at some of the top stories.

Two new studies point to the Pfizer-BioNTech and Moderna vaccines as effective against variants of the SARS-CoV-2 virus that causes COVID-19. Both studies suggest the antibodies stimulated by the vaccines are only slightly less potent against the variants than against the Wuhan wildtype strain.

“We’re not seeing big differences,” said Michel Nussenzweig, an immunologist at Rockefeller University in New York and a member of the group that published one of the studies. “Get vaccinated,” he added.

The data came from lab tests with blood samples from small numbers of vaccinated individuals. They have yet to be peer-reviewed. However, they are consistent with what has been reported from other studies.

“The take-home message is that the vaccines are going to work against the New York variant and the South African variant and the U.K. variant,” said Nathan Landau, a virologist at NYU’s Grossman School of Medicine who led the study.

Verona Pharma announced data from a pilot study of a pressurized metered-dose inhaler (pMDI) formulation of ensifentrine. The drug was safe and well-tolerated in COVID-19 patients. The trial wasn’t designed to determine efficacy, and none was observed. One patient death was reported in the group receiving the drug.

Ensifentrine is a first-in-class therapy with both bronchodilator and anti-inflammatory activities. It is in Phase III development for COPD.

“Overall, the patients in this study recovered exceptionally well, as the mortality rate in the study was much lower than aggregate data from the hospital would have suggested over the same time period,” said Mike Wells, a pulmonologist and Principal Investigator at the University of Alabama at Birmingham Hospital.

The U.S. Food and Drug Administration (FDA)’s Advisory Committee on Immunization Practices (ACIP) is scheduled to meet today to make a recommendation on the Johnson & Johnson COVID-19 vaccine.

The FDA and CDC had advised pausing the vaccine distribution after six cases of a rare blood clot were observed in women between the ages of 18 and 48, known as cerebral venous sinus thrombosis (CVST) combined with low levels of blood platelets, called thrombocytopenia. The six cases were identified out of about 7 million doses given. ACIP met to discuss the J&J vaccine on April 14 but did not make a recommendation because they felt they needed more data.

The Oregon Health Authority (OHA) announced that a woman in Oregon developed a rare blood clot and died within two weeks of receiving the Johnson & Johnson COVID-19 vaccine. The woman was in her 50s and received the vaccine before the state paused the use of the vaccine on April 13. It was the same type of blood clot identified in six other women. The U.S. Centers for Disease Control and Prevention (CDC) is investigating whether the death was directly tied to the vaccine.

“Until the investigation is complete, it cannot be concluded whether her death is related to the vaccine,” OHA stated.

Inovio Planning Phase III Trial Outside the U.S. for its COVID-19 Vaccine

Inovio announced plans for a primarily ex-U.S. Phase III trial of INO-4800, its COVID-19 vaccine candidate. Because there are so many other vaccines available in the U.S., funding for the Phase III segment of the INNOVATE trial was halted by the Department of Defense Joint Program Executive Office for Chemical, Biological, Radiological and Nuclear Defense (JPEO-CBRND) in coordination with the Office of the Assistant Secretary of Defense for Health Affairs (OASD(H.A.)) and the Defense Health Agency (DHA). They will continue to fund the completion of the ongoing Phase II segment.

After a brief suspension, the South African Health Products Regulatory Authority is proceeding with the Johnson and Johnson Sisonke Vaccination Programme. The country suspended distribution following six cases of a rare type of blood clot possibly linked to the vaccine.

The South African regulators have since reviewed the data and noted no patients in South Africa had experienced the rare blood clots after taking the vaccine. They also announced they had successfully negotiated another 10 million doses of the Pfizer-BioNTech vaccine, for a total of 30 million.

Nancy Messonnier, respiratory disease chief for the CDC, has been reassigned from the head of the agency’s COVID-19 vaccine task force into an incident management response team directed by CDC Director Rochelle Walensky. Politico notes that the situation is fluid because the agency is restructuring teams under Walensky’s leadership.

The CDC vaccine task force was founded separately from the Trump administration’s Operation Warp Speed. With vaccines now in use, the task force duties are being reassigned to Henry Walke, director of the CEDC’s Division of Preparedness and Emerging Infections. Although a spokesperson for the CDC said the agency still employs Messonnier, three of Politico’s sources say she had taken leave from the agency, calling it an unplanned vacation.

Several news outlets have reported that a volunteer in Hawaii has received a third shot of the Pfizer-BioNTech COVID-19 vaccine as part of a two-year study to determine the safety and durability of a third shot of the vaccine. Gary Lahens, of Honolulu, was one of the first to receive the two shots in September 2020 as part of the original vaccines trial. As part of the study, he was tested for COVID-19 and gave blood samples when he received the third shot. Pfizer is also evaluating the safety and immunity of the vaccine against emerging variants.

“It’s been predicted that we might have a dramatic boost in antibodies after the third shot and we’re waiting to see on the many hundred-fold level,” said Warren Sparks, who has been part of Kauai’s vaccination efforts. “And that might be a good thing, it might reduce the breakthrough cases to a true zero.”