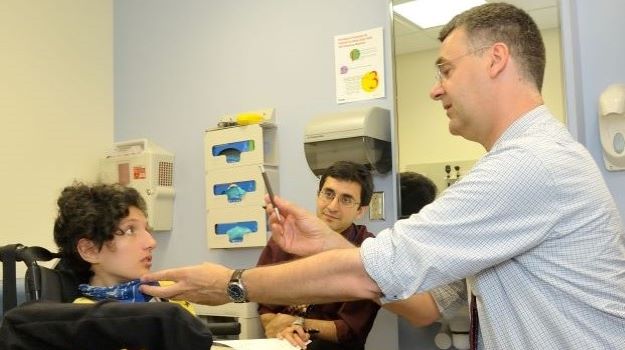 Digregorio presented with many of the hallmarks of ALS, also known as Lou Gehrig's disease, including signs of lower and upper motor neuron degeneration along with the absence of electrophysiological, pathological, and neuroimaging evidence of other disease processes that might explain her condition.

“What wasn't fitting, of course, was age,” said Dr. Carsten Bönnemann, senior investigator at the NIH's National Institute of Neurological Disorders and Stroke (NINDS) and a senior author of the study. The typical age of onset for ALS is between 50 and 60-years of age. Digregorio was just 15 years old.

Her symptoms began when she was around four years old with an abnormal gait and progressed to the point where she required a wheelchair for movement, and a tracheostomy tube to help her breathe by the time the NIH study began. Digregorio’s condition was so dire and perplexing that it drew the attention of Pope Francis, who prayed and offered an in-person blessing for the then 15-year-old Digregorio at the Vatican.

Since then, the researchers have discovered 10 other young patients with this new form of ALS, which is genetic and appears to progress over the course of a decade. This is in contrast to the usual sporadic, non-genetic type where deterioration occurs very rapidly over a few years.

“Whenever you have very early onset of the disease, we can almost bet that this is genetic, that there is a single gene behind it, so that was our hypothesis,” Bönnemann said.

So, the team embarked on a mission to isolate this gene, using next-generation genomic sequencing and discovered that their patients shared variations in the DNA sequence of a specific section of the SPLTC1 gene. What they found was surprising and entirely novel.

"At the time, SPLTC1 was known as a disease gene, but it caused a completely different disorder, conceptually the opposite of [Digregorio’s] disease. It caused sensory neuropathy, so exactly the opposite of what we found,” Bönnemann said.

In a twist of fortuitous irony, Bönnemann discovered that Dr. Teresa M. Dunn, a professor right across the street at Uniformed Services University (USU), had devoted her career to studying this very same complex. Along with Thorsten Hornemann, Ph.D., at the University of Zurich in Switzerland, they dove into the mystery, and what they found was quite surprising.

The SPLTC1 gene is involved in the production of fats, called sphingolipids, which are found in large quantities in brain tissue. Together, the researchers discovered that in the case of their patients, these sphingolipids were not being properly regulated.

“That's where we found the answer,” Bönnemann said. “The regular product of the enzyme was too high. There was an overproduction that couldn't be regulated.”

This newly discovered mutation “takes the brake” off of an enzyme partly responsible for the production of sphingolipids. SPT is controlled by a feedback loop, which is short-circuited by this mutation, meaning that the body produces an excess of these fats.

Without medical intervention, Bönnemann said that he would not expect these young patients to survive beyond their second decade. But with proper supportive care, including a breathing machine, his hope is that this could be significantly extended.

And the team might be able to do one better for these kids and young adults.

“As it happens, this particular gene, SPLTC1, one doesn't really need both copies of the gene to be operating at full 100%, so if you can get rid of one of them, the other one is sufficient to maintain normal activity as long as it can be regulated,” said Dr. Payam Mohassel, an NIH clinical research fellow and the study’s lead author.

So, the researchers created small interfering strands of RNA, or siRNA, designed to silence the mutant SPLTC1 gene. In lab experiments on the patients’ skin cells, these siRNA probes succeeded in reducing levels of the mutant SPTLC1 RNA, thereby allowing the enzyme’s activity to be regulated again with restoration of sphingosine levels to normal.

With proof-of-concept in hand, Mohassel explained that the delivery method would need to be perfected in order to take the approach further. This is where gene therapy may be able to play a role.

“Another approach is to think about converting this particular silencing siRNA into, for example, an shRNA that can be delivered by a gene therapy vector such as AAV,” Mohassel said.

An additional therapeutic path could be through small molecule inhibitors of SPT, but Dunn explained that it would be a fine balance.

“If we knock down the enzyme activity too much, it's going to have its own set of consequences, so we can't. We have to find just the right amount of drug that would return sphingolipids to normal without reducing them to the point where you get into other trouble,” she said.

Besides providing a sense of hope for children with this devastating disease, this research could offer another clue toward unlocking the mystery behind other forms of ALS.

The nature of ALS is so heterogeneous, the treatment space is often compared to oncology. Current investigative therapies are tackling the disease from multiple angles, including complement inhibition (UCB), neuroprotective agents (Prilenia Therapeutics), and a co-formulation of sodium phenylbutyrate (PB) and taurursodiol aimed at addressing the toxic, unfolded proteins and mitochondrial energy crisis (Amylyx Pharmaceuticals).

In a disease like ALS, any new discovery could provide a major break.

“Now we can look, even in sporadic ALS, to see whether these lipids might also be a biomarker for certain forms of ALS, and whether they could play a role in the multifactorial genesis of ALS in some way, shape, or form,” Bönnemann said.

In fact, in the days since this study was published, another researcher has approached the team with an ALS patient who possesses one of the mutations reported in the study, but with a later onset.

Will a therapeutic approach targeting the SPLTC1 gene come in time for Claudia Digregorio and the other 10 patients?

“This is a really active area of research in many different laboratories, academic and industry,” Bönnemann said.  “So, once someone finds the right modification for an siRNA to effectively target neurons, that will benefit everyone, and that could be closer than you think.”