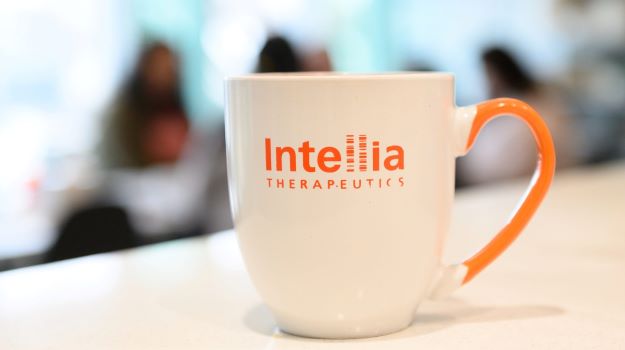 ATTR with polyneuropathy is a progressive, debilitating, systemic disease where transthyretin protein folds to form amyloid, which gets deposited in the endoneurium, part of the peripheral nervous system.

An interim readout of the Phase I trial at 1.0 mg/kg dose demonstrated a 93% mean and 98% maximum serum TTR reduction by day 28. The results were durable, observed through the follow-up period. The company initiated Part 2 in the polyneuropathy arm and expects to have another readout from Part 1 in June 2022. It also expects to have initial safety and serum TTR reduction data from Part 1 of the cardiomyopathy group in the second half of this year.

There was also a significant focus on Intellia's second in vivo candidate, NTLA-2002, which knocks out the KLKB1 gene in the liver. It is designed to permanently decrease total plasma kallikrein protein and activity, a key mediator of hereditary angioedema (HAE).

HEA is marked by recurrent episodes of severe swelling of the skin and mucous membranes. When this occurs in the upper airway, it can cause upper airway obstruction, and in the GI tract, can lead to nausea, vomiting, diarrhea and abdominal pain. Skin swelling can lead to pain, dysfunction and disfigurement, although it is typically temporarily. Intellia is progressing the single-ascending dose part of its Phase I/II trial in adults with Type 1 or Type II HAE. It also wrapped dosing in the first dose-escalation cohort (25 mg fixed dose) and started enrolling patients in the second dose-escalation cohort for 75 mg fixed doses.

Dr. John Leonard, M.D., Intellia’s president and chief executive officer, stated, “Alongside the progress of our lead program, we continued to advance our second in vivo candidate, NTLA-2002, which benefits from the modularity of our platform. We look forward to another important clinical milestone in the second half of this year when we expect to present initial data from the NTLA-2002 first-in-human study. Finally, Intellia remains well-funded to drive forward our robust portfolio and to support continued investment in platform innovation as we build upon our leadership position in genome editing.”

Intellia inked a lease agreement in February to build a GMP manufacturing facility in Waltham, Massachusetts. This will be a 140,000-square-foot plant and support its manufacturing from preclinical through commercial activities. Intellia also completed the acquisition of Rewrite, a biotechnology company focused on novel DNA writing technologies, which Leonard said, “extends the reach of our technology beyond our core focus.”

Intellia was co-founded by Jennifer Doudna, who in 2020 was awarded the Nobel Prize in Chemistry with Emmanuelle Charpentier for their pioneering work in CRISPR-Cas9 gene editing. The company uses a modular genome editing platform that can be used to treat a variety of diseases. The company has built out an impressive array of partnerships with Regeneron, Novartis, Ospedale San Raffaele, Teneobio, AvenCell, SparingVision, Kyverna and Onk Therapeutics.