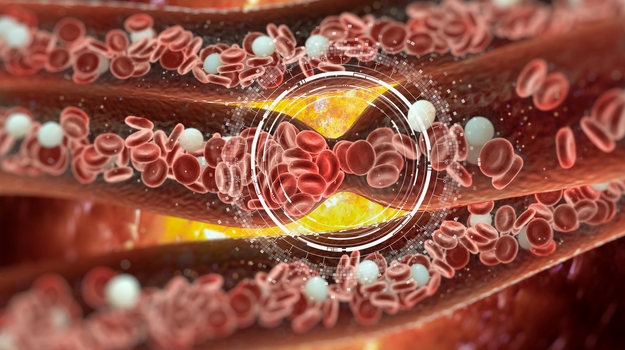 Early on in the COVID-19 pandemic, it appeared that the primary risk of death from the disease was severe pneumonia followed by a cytokine storm. As more is discovered about the disease caused by the SARS-CoV-2, an unexpected cause of death has been identified—heart attacks and strokes caused by blood clots. And this, in particular, appears to be the cause of death in some younger patients under the age of 50.

In a letter to be published tomorrow, April 29, in the New England Journal of Medicine, investigators from New York City’s Mount Sinai describe five COVID-19 patients all under the age of 50 who had large vessel strokes over a two-week period. Of the five, one died, one is still hospitalized, two are in rehabilitation and one was discharged and sent home. All five patients had mild or no symptoms of COVID-19.

Thomas Oxley, who led the study, is with the Department of Neurosurgery at Mount Sinai Health System. He said, “We’re learning that this can disproportionately affect large vessels more than small vessels in terms of presentation of stroke.”

It is possible that inflammation in the blood vessel walls are triggering the blood clots. It’s also possible it is directly caused by the virus.

Andrew Rogove, medical director, Stroke Services at Northwell Health’s Southside Hospital in Bay Shore, New York, told Forbes, “It appears that the underlying cause of stroke in young patients with coronavirus are cerebral emboli. Many of the patients infected with coronavirus are hypercoagulable and this extra propensity for forming blood clots is leading to a higher incidence of strokes in coronavirus patients including younger patients.”

The authors of the Netherlands study wrote, “COVID-19 may predispose to both venous and arterial thromboembolic disease due to excessive inflammation, hypoxia, immobilization and diffuse intravascular coagulation (DIC).”

Stroke is typically not seen often in younger adults. The American Stroke Association indicates an individual’s stroke risk almost doubles every 10 years after the age of 55. However, with COVID-19, strokes in people as young as 30 have been observed.

Researchers with Philadelphia’s Thomas Jefferson University Hospitals, New York City’s NYU Langone Health and Mount Sinai Beth Israel Hospital are the authors of the NEJM study to be published tomorrow. As Health magazine notes, five patients doesn’t sound like a lot, but it’s a sevenfold increase of what’s expected in people in that age range.

Oxley noted, “It’s been surprising to learn that the virus appears to cause disease through a process of blood clotting.”

In an email to CNN, Jeffrey Laurence, a hematologist at Weill Cornell Medicine in New York City, wrote, “The number of clotting problems I’m seeing in the ICU, all related to COVID-19, is unprecedented. Blood clotting problems appear to be widespread in severe COVID.”

It's still not clear if SARS-CoV-2 uniquely causes clotting or if it’s the result of severe inflammation. Kathryn Hassel, a hematologist at UCHealth University of Colorado Hospital, told Health it was possible that the virus isn’t any different than other types of infections or severe illnesses that cause clotting, “but it’s just that we’re seeing tens of thousands of cases all at once so it really comes to our attention and we are revealing the vulnerable people in the population.”

But the blood clots are associated with death, with up to 70% mortality in patients with high blood clotting in COVID019 compared to those with minimal problems with blood clotting. Barry Boyd, a Yale Medicine hematologist and oncologist, told Health, “This strongly suggests that while it is not the only or sole cause of mortality, it is very closely associated with multi organ failure and these clotting events themselves will also compromise survival.”

It has led to the use of prophylactic anticoagulation with heparin to become part of the response to the disease. There have also been warnings to the public to be aware of stroke-like symptoms such as weakness, difficulty speaking, dizziness or numbness that could be signs of COVID-19-related blood clots, particularly in younger adults who may not necessarily have other symptoms of the disease. Although unlikely to be viewed as good news, exactly, physicians are adept at treating blood clots and strokes, with fast response being the key.