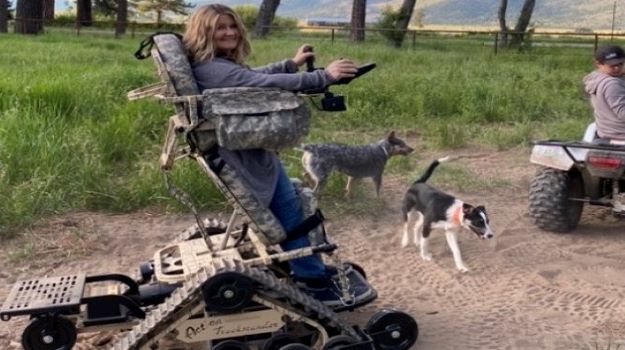 May is Amyotrophic Lateral Sclerosis (ALS) Awareness Month, and while the world fights to defeat COVID-19, patients like Morris, a 54-year-old mother of three, continue to send out another battle cry – and the Healey ALS Platform Trial is answering it. The companies in this trial are saying “yes.”

The trial, comprised of five investigational medicines, is the first to receive five stars on the Patient-Centric Trial Design (PaCTD) Rating Criteria, created by a group of patient and caregiver volunteers on the I AM ALS Clinical Trials Team.

“It’s time-efficient. Because it’s a perpetual trial, when we add new drugs, it’s a 30-day kind of a thing rather than a year to start a new trial, as all we have to do is amend the platform to add a new drug. It usually takes a year to get a new trial off the ground. We hear from people with ALS that they don’t have time, so we need to be efficient,” said Dr. Merit Cudkowicz, Director of The Sean M. Healey & AMG Center for ALS at Massachusetts General Hospital.

“I lost the privilege of living on the human clock when I was diagnosed,” Morris said. “The ALS clock is tragically fast. 90% of us are dead in five years. We need to work with that timeline. We need to work as aggressively as the disease itself.”

In 2018, investment executive Sean Healey made a donation to Mass General to accelerate innovative drug development in ALS, the disease that would eventually take his life. Subsequently, the center put out a worldwide call to pharmaceutical companies conducting research in the space. Thirty companies from 10 different countries applied.

Five drug regimens were chosen, including CNM-Au8, an oral, liquid suspension of gold nanocrystals being developed by Clene Nanomedicine, Inc.

CNM-Au8 is designed to improve the survival, function, and communication of nerve cells, and its method of delivery holds the distinction of being extremely patient-centric.

“We are an oral solution the patients drink every morning. When they do so, they drink a quadrillion nanocrystals of a bioenergetic catalyst that we call CNM-Au8,” said Clene president and chief executive officer, Rob Etherington.

“Every one of us slows down as we age. Coupled with the assault of neurodegenerative diseases like Parkinson’s, like MS, and especially like ALS, everything goes haywire very fast. So, our asset is trying to help the neuron have the energy it requires to take care of its own housekeeping,” Etherington explained.

In October of 2019, UCB acquired Ra Pharmaceuticals and with it, Zilucoplan, a peptide inhibitor of complement component 5 (C5) with a wide range of potential therapeutic applications, including in ALS.

“What can happen occasionally is that the complement system turns against your own body, as in an autoimmune reaction in the widest sense,” explained Dr. Petra Duda, Head of Development for Zilucoplan at UCB.

While Zilucoplan has demonstrated success in generalized myasthenia gravis (gMG), a complement-mediated disease of the neuromuscular junction, studies have indicated its potential in ALS.

A platform trial is also efficient in that it enables the investigators to share placebo information. Each section in the Healey trial is randomized 3:1, active drug-to-placebo. Not only does this allow more patients to participate in the trial, it enables more of them to gain access to a potentially effective treatment.

“ALS patients love this platform trial because they have a much higher chance of being on an active treatment compared to a traditional trial,” said Duda. “From our perspective, the benefit is that it allows us to get to an answer quicker, because we don’t have to enroll twice as many patients as we would on active treatment, but only 1.3 times as many.”

The Platform Trial: A Glimpse of the Future

Prilenia Therapeutics is led by Dr. Michael Hayden, M.D., a world-renowned researcher in Huntington Disease who was named “one of the 50 Canadians born in the 20th century who have changed the world.” So, a pretty good guy to have onside when trying to unlock one of the world’s most elusive diseases.

In January, Prilenia enrolled the first patient in the Healey Platform Trial for its therapeutic candidate, Pridopidine, a neuroprotective agent that confers neuroprotection. It helps remove toxic aggregates from cells, enhances and restores neuronal activity, and critically for ALS, animal models and human cells show that it protects neurons from early cell death.

Recent imaging studies in humans have demonstrated that pridopidine enters the brain and spinal cord, where it activates the sigma-1 receptor (S1R) protein.

“Mutations or spelling errors in genes, can either disrupt and cause complete dysfunction or can result in partial dysfunction of the S1R gene. Those with complete dysfunction of the gene, get a juvenile, childhood form of ALS. If you have a protein with some dysfunction, you get adult-onset ALS. So, this is very compelling genetic data that implicates the sigma-1R as important in the pathway that, when dysfunctional, leads to ALS. On the other hand, when you overexpress S1R and enhance its activity, cells have improved viability and muscle contractility is improved,” Hayden said.

He spoke to the depth of interest and curiosity he has witnessed in the ALS patient community.

“We talk and interact with the patient organizations and the patients themselves," he said. "At the last meeting we had with them, I was really impressed by the number of patients who were there, and the questions were very intuitive and perceptive.”

“One of the things that I think a lot about is, how do we move from a single therapy to a cocktail approach that has been so effective in other diseases like HIV?” Leitner said. “Unfortunately, there are many pathways, many processes going wrong in the cell, and we probably are going to need to have a way to remedy across these. I think the vision is that, as we have therapies that have a benefit and can slow progression, that will give us the option and the opportunity to test combinations. In my view, polypharmacy is probably the best way to treat a complex disease like ALS. I think that’s going to be true across multiple neurodegenerative diseases.”

Also being investigated in the Healey trial include Biohaven Pharma’s myeloperoxidase inhibitor, Verdiperstat, and Seelos Therapeutics’ Trehalose, a low molecular weight disaccharide that crosses the blood-brain barrier and activates autophagy.