BioPharm Executive: What Gets This Market Back on Track?

An ugly start to 2016 has just gotten uglier. The Nasdaq Biotech Index (NBI) is now down 24 percent year-to-date (which is actually a considerable improvement from where it was earlier this month). The average NBI component, according to numbers crunched by investor Brad Loncar a few weeks ago, is down 58 percent from its high. That's the average. That means these stocks would have to rise 72 percent just to get back where they were several months ago.

Last month I talked about seven things I thought were pushing the biotech market off course and what I thought was mitigating some of the bad news. Well, the negative factors remain largely in place, while mitigation has been in short supply.

Take mergers and acquisitions. They were a big driver of value in 2015, as investors cheered just about any link-up. And the dealmaking itself has carried over (at a predictably less breakneck pace) into this year. But M&A news is now being scorned instead of welcomed. Just look at the reception Mylan got to its buyout of Sweden's Meda AB . Certainly Mylan and its CEO aren't beloved on Wall Street, and this deal was criticized because Mylan is paying a huge premium (92 percent from where the stock was trading just before the deal was announced.) But this deal wasn't hatched in a few days—Mylan has been courting Meda going back at least to 2014. And Meda, like most biopharma companies, has seen its stock crushed over the past few months, effectively raising the premium on Mylan's bid. Perhaps Mylan didn't get the best deal ever, but paying 12.5 times EBITDA is hardly crazy—a few months ago, investors would have been cheering, not bidding the stock down 18 percent.

There are some institutions—hedge funds and others—that are always playing in the biotech space, whatever the environment. Other, more generalist institutions move in to a lesser or greater degree as they see the opportunity. And sometimes—when things get really hot, like they did over the past couple years—retail investors pile on. March along this spectrum, and the investors get progressively less informed about what they're investing in. Retail investors in particular are a mixed blessing for the sector. They move in because they hear that, say, CAR-T will cure cancer, not really understanding the timelines and cash outlays involved. They (understandably) got excited about huge gains and (also understandably) spooked by huge losses. Now they've moved on. Some of them will be back for the next bull run, but not until things reach a fever pitch.

Biotech has given us some great reasons for enthusiasm over the past few years. Hepatitis C can now be pretty reliably cured. Checkpoint inhibitors have extended lives. CAR-T has produced some stunning early results and seems poised to transform the treatment of, at least, certain blood cancers. Technologies like gene therapy, antisense and RNAi seem just around the corner, with new approaches like CRISPR and gene editing waiting in the wings. These weren't the products of investors' fevered imaginations; they're real advances.

And then it seemed like things kind of dried up. Juno Therapeutics , for example, increasingly made it clear that chronic lymphocytic leukemia was something of a low-hanging fruit for its CAR-T technology, with lots of work to do before moving on to lymphomas, much less solid tumors. Bluebird Bio , which many investors believed had cured both beta thalassemia and sickle cell disease, reported some, shall we say, more nuanced results. Even drugs like Opdivo and Keytruda aren't magic bullets. It's not that there was terrible news; just a dose of reality and no new excuses to keep the party going.

So what brings it back? Success feeds on itself, and investors will eventually follow. It's the enthusiasm that really needs a comeback. And for that, we need some good news—especially in the clinic. There is of course a steady flow of news, both good and bad, but we're missing the really captivating news that stirs imaginations and opens wallets.

• By the time you read this, we may have heard from Celldex Therapeutics , which should any day be revealing interim results from its ACT IV trial for its brain cancer vaccine. Despite some impressive results in a different study called ReACT, Wall Street seems to be voting for complete failure right now. Success could bolster more than just Celldex.

• Biogen 's Anti-LINGO has produced some encouraging results in acute optic neuritis related to multiple sclerosis. A phase II study in MS itself is expected to report out around mid-year. Since this drug seeks to treat MS in a fundamentally different way—it has actually shown myelin repair in animal models—success could really shake up the multi-billion dollar market and get investors excited.

• Likewise, any good news in Alzheimer's disease could move the needle. If it gets really lucky, Lilly could produce some on solanezumab by the end of the year, from an interim readout from EXPEDITION 3. (Biogen is unlikely to give us much news on aducanumab in the near future, and other major news would come as more of a surprise). 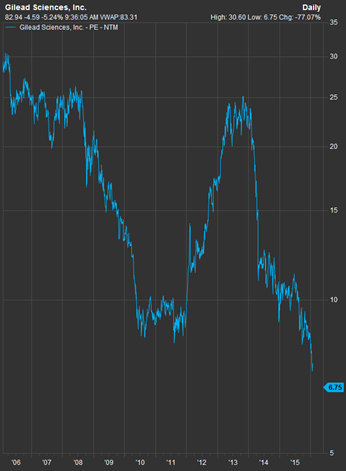 In the meantime, I'll leave you with this (see right image), courtesy of Charley Grant at the Wall Street Journal:

It shows Gilead 's forward P/E ratio over a 10-year period. The depths of the Great Recession now look like the good old days. No wonder the company has announced it will be buying back up to $12 billion of its own stock.

Nevertheless, it also underscores the broader point here: Gilead has guided for a slight sales decrease in 2016. The reaction is probably overdone, but investors don't come to biotech for value; they come for excitement, new horizons and growth.