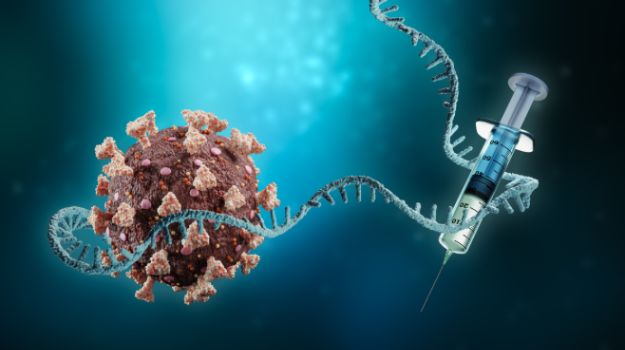 An international team of researchers led by the University of Oregon conducted a BLAST search comparing the genome of SARS-CoV-2 with genome sequences within databases of other genomes. They identified a 19-nucleotide-long RNA sequence found in the virus’s furin cleavage site that matched a 19-nucleotide sequence in a genetic segment owned by Moderna. Moderna filed a patent for a 3,300-segment nucleotide sequence in February 2016 as part of its cancer research division. The research was published in Frontiers in Virology.

SARS-CoV-2 has approximately 30,000 nucleotides in its genome. Its amino acids have an 82.3% match with a bat coronavirus SL-CoVZC45. It also has a 77.2% amino acid match to SARS-CoV, the virus that causes SARS, and a 96.2% genome sequence match to another bat coronavirus, RaTG13.

RaTG13 has a possible connection to the origins of COVID-19. In April 2012, Chinese miners were assigned to clear bat guano from an abandoned copper mine in southwest China. Six of the miners became ill with what was called a mysterious illness, with three deaths. Researchers from the Wuhan Institute of Virology (WIV) were called in to investigate and collect 276 samples from the bats in the mine. They later identified several new coronaviruses.

The research was led by Shi Zhengli, Ph.D., the WIV’s leading bat coronavirus expert, and published in 2016 in the journal Virologica Sinica. This time in Nature, Shi and colleagues published another paper describing a virus called RaTG13. There was some confusion over whether RaTG13 was from a bat in the mine at the original publication, or whether the virus was RaBtCoV/4991. Shi and colleagues eventually updated the paper in Nature to say they were the same viruses, but they had retested samples from the miners, and they had not been infected with SARS-CoV-2.

SARS-CoV-2 is the only known coronavirus to carry 12 unique amino acids that can be activated by an enzyme called furin. The furin cleavage site is on the virus’s spike protein, which binds to human cells to enter those cells. Researchers add a furin site to viruses in some virology labs to make them more infectious. In the wild, viruses can acquire the furin site by switching genetic code with other viral family members.

Some may view this research as evidence that SARS-CoV-2 originated in the laboratory. It appears to be significantly less precise, and a 19-letter sequence is minimal.

This new report suggests that there is a one-in-three trillion chance Moderna’s sequence randomly showed up via natural evolution, at the very least “is highly unusual and requires further investigations.”

The sequence Moderna patented is part of a gene known as MSHE and is involved in how damaged cells repair themselves. It is a possible target for cancer therapies. Twelve of the 19 amino acids are in SARS-CoV-2’s furin cleavage site, with the remaining seven matching nucleotides in a part of the genome nearby. The researchers suggest that this matching code may have become part of the COVID-19 genome by way of infected human cells expressing the MSH3 gene.

Lawrence Young, Ph.D., a virologist at the University of Warwick, said it was interesting but probably not significant enough to suggest the virus was manipulated in a laboratory. “We’re talking about a very, very, very small piece made up of 19 nucleotides. So it doesn’t mean very much to be frank, if you do these types of searches you can always find matches. Sometimes these things happen fortuitously, sometimes it’s the result of convergent evolution (when organisms evolve independently to have similar traits to adapt to their environment). It’s a quirky observation but I wouldn’t call it a smoking gun because it’s too small. It doesn’t get us any further with the debate about whether COVID was engineered.”

Simon Clarke, Ph.D., a microbiologist at Reading University, also questioned the one-in-three trillion statistics, saying, “There can only be a certain number of [genetic combinations within] furin cleavage sites. They function like a lock and key in the cell, and the two only fit together in a limited number of combinations. So it’s an interesting coincidence but this is surely entirely coincidental.”

There are currently two broad theories on the origins of COVID-19. One is that it was a lab leak, probably from viruses being investigated at the WIV. The second is that the virus occurred naturally in bats, jumped to an intermediary animal (yet to be identified) and then to humans. At this time, the evidence for each is about 50/50.