The SARS-CoV-2 Spike Protein Interferes With Pain Perception, But Does It Help Transmission? 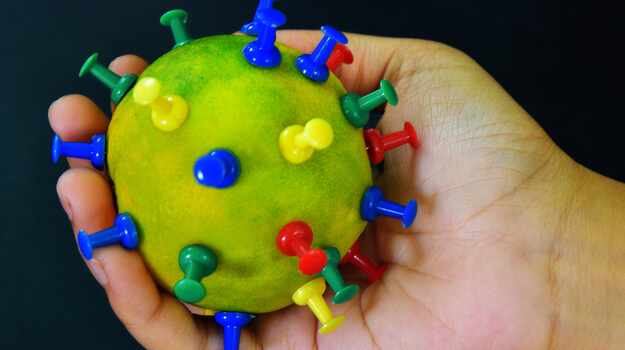 The SARS-CoV-2 virus, responsible for the current COVID-19 pandemic, is peculiar for a number of reasons that we still don’t fully understand. Perhaps the most poignant example of the virus’ peculiar nature is the degree to which those who are infected present with minimal or no symptoms. The WHO speculates that upward of 80% of COVID-19 cases are mild to asymptomatic, making the public health response to curbing the viral spread an extremely difficult task.

The global research community is still in the process of elucidating why some COVID-19 cases are asymptomatic while others become very ill. Perhaps the best explanation at the epidemiological level is based on age, where we know younger people become less ill when infected with SARS-CoV-2, and they are significantly more likely to be asymptomatic. Yet, this is not a mechanistic explanation for the asymptomatic case phenomenon.

Researchers out of the University of Arizona led by Dr. Rajesh Khanna have published interesting experimental evidence that may help explain why some people contract COVID-19 without falling ill. The research published in PAIN posits that the perception of pain is dampened in COVID-19, which may partially explain why many people experience little to no symptoms when infected with SARS-CoV-2.

The SARS-CoV-2 virus is primarily made up of two parts; an RNA-based genome that encodes for genes involved in its replication and lifecycle, and a protein coat that protects this genome from the host immune system until it is able to transduce it inside a host cell. The principal component of the protein coat is called the spike protein—the target for most of the hopeful candidate vaccines—which initiates infection by interacting with the human ACE2 receptor. But Dr. Khanna and his team note in their study that ACE2 is not the only human protein that the spike protein can interact with.

Dr. Khanna’s team’s research focus is the neuropilin-1 receptor (NRP-1). NRP-1 is stimulated by a physiological ligand known as vascular endothelial growth factor-A (VEGF-A), initiating genetic and biochemical pathways involved in pain response. Prior to their study, NRP-1 was determined to be upregulated in COVID-19 patients, and the SARS-CoV-2 spike protein was structurally predicted to bind NRP-1 at the same site that it interacts with VEGF-A.

Often, though, epidemiological observations like the upregulation of NRP-1 in COVID-19 patients does not provide direct evidence for a causal relationship. Astonishingly, the experimental results from the Arizona-based researchers demonstrated that not only does the spike protein directly competitively bind NPR-1, but it also does so extremely successfully; where even low concentrations of spike protein were sufficient to block VEGF-A from binding NRP-1.

The activation of VEGF-A/NRP-1 signaling leads to voltage-gated sodium and N-type calcium current densities followed by spontaneous firing in dorsal root ganglion (DRG neurons), which are first-order neurons located proximal to the spinal cord. The researchers demonstrated that the SARS-CoV-2 spike protein subverts this process, which is required for the activation of pro-nociceptive signaling, which triggers nociception—the perception of pain sensation.

It’s tempting to speculate that the SARS-CoV-2 virus may block pain signaling in order to gain a reproductive advantage. In this case, the University of Arizona researchers’ model might suggest that upon infection with the SARS-CoV-2 virus, the spike protein on the coat of the virus would inhibit the pain response and allow for them to go about their day normally, while infecting other individuals.

While this is certainly possible, it’s important to look at the limitations of these data. Another competing hypothesis could be that by blocking VEGF-A signaling, the virus dampens the immune system to allow for more efficient invasion of tissue. This is supported by the fact that VEGF is implicated in dendritic cell (DC) inhibition. Increased free VEGF in the body due to the antagonistic competition of the spike protein for the NRP-1 receptor could lead to fewer DC’s, which are responsible for initiating and amplifying both the innate and adaptive immune responses.

Clearly, the transmission hypothesis suggested by these data is interesting and worthy of further study. Dr. Khanna is going to be teaming up with some University of Arizona-based immunologists and microbiologists to test just this. But given that the main focus of Dr. Khanna’s research is designing small molecule inhibitors against NRP-1 in order to better understand the pharmacology of pain relief, there are more potential interesting developments from these results.

In the press release for this research at the University of Arizona office of public affairs, Dr. Khanna notes that while we are dealing with a pandemic, we are also in the midst of an opiate epidemic. Dr. Khanna notes that while understanding pain might help us understand this pandemic, COVID-19—in turn—might be able to teach us something about how to approach non-opiate methods of pain relief.