The Challenge of Cultured Meat 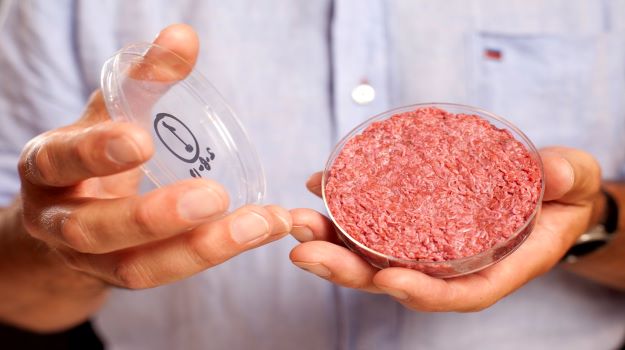 Aleph Farms announced last week they 3D printed a small piece of muscle tissue on the International Space Station. The success of this miniature steak highlights the key advantage of cultivated meat: you can make it anywhere. Traditional livestock farming requires acres of land for animals and feed, thousands of gallons of water per pound of meat (10-15,000 Liters per Kilogram of beef produced), and years to grow the animals until they are ready for slaughter. Cultured meat, where animal tissue and cells are grown in bioreactors under controlled conditions, promises something different: grow what you need, as you need it.

Humankind is facing a global population of 10 billion by the year 2050. The International Panel on Climate Change reported on land as a critical resource, highlighting that less meat consumption could help secure food production for the growing population. Adopting a plant-based diet is receiving more attention in developed countries, however meat consumption is rising in developing nations. Is cultured meat the solution for making meat sustainable?

In 2013, Dr Mark Post of Maastricht University hit the headlines with his iconic burger in a petri dish photo and the world’s first cultured meat product. The work was backed by Google co-founder Sergey Brin and Dr Post went on to co-found Mosa Meat to develop the technology further.

Since 2015, several companies emerged targeting different meat markets. Mosa Meat in the Netherlands is working on several animal cell types, alongside their cultured beef product. JUST, based in San Francisco, advertise their work on Wagyu beef but are developing a range of cultured animal meats. UK-based Higher Steaks is developing cultured pork, while Finless Foods is creating cultured tuna in California. In Singapore, Shiok Meats has risen rapidly with investment in its cultured shrimp product from backers like Ryan Bethencourt of Wild Earth.

All of these companies have proven their technology at the laboratory scale. The next big step is scaling up. Beef farmer Illtud Dunsford from Wales in the UK came across this technology at a conference in 2015. At the time he was doing a farming scholarship while running his family’s 300-year-old farm. The moment he learned about cultured meat, everything changed for him.

“At the time, being heavily involved in the meat industry, heavily involved in adding value to animal waste products, here was a technology that could just grow the part of the animal that we wanted to consume rather than the whole animal. From a life cycle analysis perspective, it was considerably kinder to the planet. For me, there was this lightbulb moment,” Dunsford recalls.

Dunsford met Dr. Marianne Ellis, Associate Dean of Engineering at the University of Bath, at a conference discussing Post’s creation. Together they co-founded Cellular Agriculture Ltd with the goal of developing bioreactors for growing cultivated meat at scale. Seeing the opportunity to grow many different meat products, they developed a broad approach to cater for different cell types using a hollow fiber membrane bioreactor.

“It’s not just what we build as a technology but the inputs and the sundries. We consider the different elements to be the cell sourcing or cell types, the medium which is the nutritional soup that feeds the cell, and then if your system needs a scaffold for the cells to grow on then you need a scaffold as well. So, all of those things that are bespoke for that cell type and within that technology,” says Dunsford.

Future Meat Technologies is also working on scaling up cultured meat and recently announced $14 million in funding to develop a facility in Israel based on technology developed at the Hebrew University of Jerusalem by company co-founder Prof. Yaakov Nahmias. Their facility plans to include processing for final products as well as 3D bioprinting. Aleph Farms, developing cultured beef steaks, are also Israel-based, making this an interesting space to watch for future development of the field.

Cultured meat companies develop their own methods for lab scale product development using bioreactors designed for biomedical applications and bespoke nutrient broths in which to grow their cells. This poses a challenge for existing CMOs who cannot handle this technology for food applications, making outsourcing scale-up very difficult and companies like Cellular Agriculture and Future Meat Technologies, who know and understand the challenges associated with cultured meat, natural partners.

Besides scaling up, the technology has a few other limitations. The nutrients needed for growing animal cells are expensive and sometimes rely on animal-derived components such as fetal bovine serum. The development of nutrient broths that are both low-cost and animal-free is the holy grail of cultivated meat and each company has their unique approach to grow their cells. Another limitation is the lifetime of a cell line. Cells are initially taken via biopsy from an animal and cultivated as seed stocks for each bioreactor. But all cell lines are prone to senescence whereby the cells die out and cannot divide anymore, resulting in the need for another biopsy. In this respect, animals still play a role in the cultivated meat industry.

Still, these products are not far from our shelves. Some companies have cited late 2020 and 2021 as target years to enter the market. Few are in a hurry, however, and are content to wait for the market reaction to such products before they launch their own. Those in the industry call it “slaughter-free meat” and “cultivated meat” to demonstrate its similarity to what we know while highlighting that it can help make a more sustainable world through using less land and water.

For Dunsford, the farmer making cultivated meat a reality, he thinks of the bigger picture when it comes to this technology and sustainability.

“It’s not just reducing meat. We have to be far more holistic in how we produce all of our food and we have to consider that shifting from meat to monocultures [cultured meat] has its own problems. It’s one thing we never really discuss in terms of the effect on soil and the effect on biodiversity that moving to pea and soya has. But there’s a long way to go before we get an answer. I think it’s positive but as-yet undefined.”