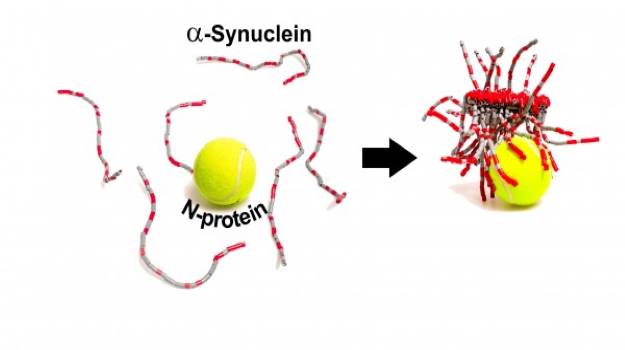 Scientists have pondered possible linkages between COVID-19 and the onset of Parkinson’s disease for more than a year. Now a report published in ACS Chemical Neuroscience details that correlation. The findings may have far-reaching consequences for any COVID-19 vaccines in development that are based upon targeting the well-conserved SARS-CoV-2 nucleocapsid (N-) protein.

First author Slav A. Semerdzhiev and colleagues from the University of Twente in The Netherlands showed through in vitro work that the SARS-CoV-2 N- protein interacts with a neuronal protein called α-synuclein and speeds the formation of amyloid fibrils, which are a defining feature of Parkinson’s disease.

The SARS-CoV-2 virus is known to cause neurological problems, including headaches, “brain fog” and loss of smell, in addition to respiratory symptoms. Loss of smell also is an early symptom of Parkinson’s disease. What researchers didn’t know was whether those neurological issues were caused by the virus entering the brain or by chemical signals released in the brain by the immune system in response to the virus.

To gain a better understanding of the issue, Semerdzhiev and colleagues studied the interactions of the SARS-CoV-2 spike protein (S-protein) and the N-protein in terms of their effects on α-synuclein aggregation. The S- and N-proteins are the two most common proteins in the SARS-CoV-2 virus.

The S-protein helps the virus enter and thus infect cells, and the N-protein encapsulates the RNA genome within the virus. Because the N-protein is more conserved and more stable than the S-protein, it is a target for vaccine development, which makes this research particularly concerning.

In those studies, aggregation began as early as 9 hours and generally peaked at about 20 hours, depending upon the concentration (which ranged from 0.1 µM to 1 µM) of N-protein injected into the 10 mM NaCl sample. Without the presence of the SARS-CoV-2 virus, aggregation began at 240 hours and peaked around 280 hours. This rapid acceleration of the formation of multiprotein complexes and their aggregation into amyloid fibrils indicates that “the N-protein facilitates the formation of a critical nucleus for aggregation,” the researchers concluded.

“Microinjection of N-protein into SH-SY5Y cells disturbed α-synuclein proteostasis and increased cell death,” they determined. More specifically, compared to controls cells, when the proteins were injected into Parkinson’s models, “about twice as many cells died upon injection of both proteins (the N-protein and α-synuclein).” The distribution of α-synuclein changed and elongated structures, although the researchers could not confirm whether those structures were amyloid.

The interactions between the N-protein and α-synuclein are based – at least in part – on their opposite electrostatic charges, which in these in vitro experiments bound “at least three or four copies” of α-synuclein to the N-protein.

Unlike the normal process of amyloid fibril formation, in COVID-19, the aggregation occurs in two steps. The first step appears to be the disturbance of α-synuclein proteostasis. The second is the formation of the amyloid fibrils.

The N-protein is generally considered less interesting and effective than the S-protein in vaccine strategies, yet researchers in 2006 found that immunizing mice with that protein can elicit CD4+ and CD8+ T cell responses. Although vaccines using the N-protein conferred protection in some models and against some infections, other studies of SARS-CoV not only showed a lack of protection but also increased incidence of infection-induced pneumonia by increasing pulmonary eosinophil infiltration and TH2 cell-based responses.

More recently, other researchers reiterated concerns about the use of the N-protein in vaccines. In December, first author Arthur Currier of Howard University and colleagues from the University of Delaware and Nemours Biomedical Research wrote in COVID 2021 that although the N-protein is the most abundant viral protein and is involved in neutralizing the SARS-CoV-2 infections, there are concerns in the areas of viral clearance and immunopathology.

Research involving the N-protein is ongoing, however. ImmunityBio for example, published research regarding its dual-antigen COVID-19 vaccine in September in Frontiers of Immunology. It uses genes for a modified SARS-CoV-2 S-protein, N-protein and an enhanced T-cell stimulation domain to increase major histocompatibility complex (MHC) class II responses. Studies found that rhesus macaques injected with this vaccine, followed by two oral boosts, exhibited neutralizing anti-S IgG and T helper cell responses to both S- and N- proteins that protected both the upper and lower respiratory tracks from SARS-CoV-2, inhibiting viral replication within 24 hours of the challenge so that the virus was undetectable seven days later.

Such results are promising but may be tempered by this new understanding of the effects of the SARS-CoV-2 N-protein on α-synuclein and subsequent formation of amyloid fibrils. As Semerdzhiev and colleagues wrote, this work suggests that “SARS-CoV-2 infections may have long-term implications and that caution is required in considering N-protein as an alternative target in vaccination strategies.”