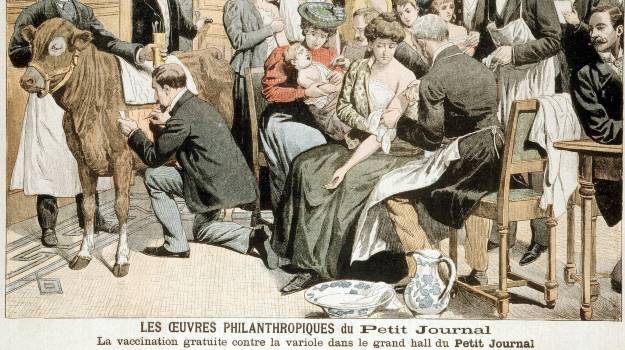 Epidemics and pandemics have had a very strong impact on human history. Diseases like smallpox, measles and plague wiped away entire populations in several regions of Europe, the Middle East and Asia. Smallpox was the first disease to be eradicated successfully using a vaccine, albeit after extensive research spanning hundreds of years. However, its novel nature on discovery and eradication despite no prior knowledge makes its case history noteworthy with respect to the ongoing COVID-19 pandemic.

Taking a closer look at the nature of pandemic responses and comparing them to the current medical research landscape will be helpful in planning future interventions. They also provide a picture of possibilities and hope to today’s society.

The origin of smallpox can be traced way beyond documented history with references described in ancient Chinese and Sanskrit texts. In North America, the disease was probably introduced by European colonization during the 17th century.

The fatality rates for smallpox have varied between less than 1% and 50%. The wide variation in fatality rates in different geographies is due to variation in virulence of particular strains - variola major and variola minor being the most popular ones, with many more intermediate strains being described. Other factors include the socioeconomic and nutritional status of the affected population.

Smallpox was an acute febrile viral disease characterized by a distinct pustular-vesicular rash. The incubation time is approximately 10-12 days. The virus was transmitted by inhaling oral, nasal or pharyngeal mucosal droplets of an overtly ill patient in close contact. Transmission occurred mostly at times when patients were already sick and unable to circulate widely. Hence, smallpox outbreaks were more localized in small, closely-located population groups in towns or villages and in localized areas of a province or district. The incidence of smallpox was highest during winter and spring. Healthcare workers – as now with COVID-19 – were at the highest risk.

Variola major, which had a 30% fatality rate, was the only known variety until the end of the 19th century, while Variola minor became the prevalent variety throughout the United States, parts of South America, Europe and southern and eastern Africa from the 19th century onward with a case fatality of 1%. Examples of the magnanimity of the disaster caused by smallpox would be the deaths of five reigning European monarchs in the 18th century, and the Austrian Habsburg line of succession shifting four times in four generations.

Both smallpox and COVID-19 are novel diseases in their respective timelines. Both spread by inhaling infected droplets, albeit COVID-19 is transmitted through aerosols and surfaces touched by infected people as well. Smallpox put a huge medico-economic burden on humanity for at least 3000 years, killing an estimated 300 million people during the 20th century alone. Around 977 million people were estimated to be living with the disease in endemic areas. To further add to the troubles, much like the initial cases of COVID-19, some countries only reported cases that surfaced when the patient was seriously ill and admitted in hospitals, while most went unreported.

Despite taking place in a medically-advanced time, COVID-19, which affects blood-oxygen levels and causes acute pneumonia that can also be fatal, has already caused 263,563,622 confirmed cases and 5,232,562 deaths globally within a span of only 2 years. Major risk factors for COVID-19 are age, obesity and comorbidities including pulmonary diseases, diabetes, cancer and neurological diseases, which drive the fatality of the condition.

The virus, SARS-CoV-2 has spread across continents owing to frequent air travel and a majority of asymptomatic cases that have not been caught under any scanner. Though smallpox was not declared a pandemic due to the lack of established means of travel compared to current times, it was nonetheless deadly among those affected. Localized areas of affected populations were quarantined, just like the present-day quarantines and lockdowns, with no established treatment for either disease. The first smallpox vaccine was discovered in the late 18th century, and it took two more centuries to fully eradicate the disease.

The process of developing a vaccine against a new pandemic microbe is lengthy and laced with struggles and obstacles. Despite all the advances in science and medical technology, the cycle from vaccine research and development to approval and production could take up to 10 years.

To cope with an emerging pandemic, one must have scientifically validated ‘templates’, or at least a blueprint of how vaccines need to be developed, based on past experiences. Since vaccine development takes almost a decade, by the time clinical trials reach phase III, the number of cases go significantly down, leaving little room for research against adverse effects of the vaccine and its commercial application.

Owing to relentless efforts by scientists, the U.S. got three COVID-19 vaccines approved and administered under emergency regulatory approvals within 13 months of the virus’s discovery. Despite this, a novel virus is bound to undergo mutations. The current challenge lies in tweaking the vaccines to prevent breakthrough infections due to mutants such as Delta or Omicron.

The initial struggles of combatting smallpox involved use of “natural” empiric vaccines initially by the Chinese and later by Dr. Edward Jenner, who observed that milkmaids with cowpox tended not to be stricken by smallpox. He injected fluid from a cowpox lesion into the arm of an 8-year-old boy before exposing him to various viruses. The boy did not ever catch smallpox. This gave rise to the concept of immunity and thus began the saga of engineering immunity against disease.

A major factor behind the success of the smallpox eradication campaign was political commitment and leadership, from the World Health Organization and its partner the U.S. Centers for Disease Control and Prevention. This, along with adequate funds allocated for specific targets, a determined staff and a unit with overall accountability and responsibility for the program, led to the disease being declared eradicated in 1980.

Best results were obtained when WHO staff went into the field frequently to review activities and resolve problems. Their success showed that one needed relatively few highly committed, motivated, determined and knowledgeable individuals to engage large groups of people, even in the most remote areas and small towns and districts. No two national campaigns were alike, which points to one of the most crucial lessons that can be learned from smallpox eradication: the need for a flexible approach, which the WHO adopted in 1967.

Harnessing the existing healthcare systems in different regions and adapting to different administrative, socio-cultural and geo-political situations, the agency accomplished its mission.

A chain reaction followed wherein health staff were trained adequately in vaccination and search and containment. This training was especially important for hospital-based health systems with no prior experience in setting up preventive campaigns.

Financially speaking, the cost of the intensified effort, led by WHO, was estimated to be $300 million USD in cash by global donors in addition to contributions by individual countries. These investments can now boast of saving the world far more than $1 billion USD every year since 1980.

A Reminder of What is Possible

As WHO Director-General Dr. Tedros Adhanom Ghebreyesus put it at a virtual event hosted at WHO HQ to celebrate the 40 year anniversary of smallpox eradication, “As the world confronts the COVID-19 pandemic, humanity’s victory over smallpox is a reminder of what is possible when nations come together to fight a common health threat.”

1. No animal reservoir for the virus is known or suspected.

2. Sensitive and specific tools are available for diagnosis and surveillance.

3. Transmission from one individual to another can be interrupted.

5. The burden of disease is important to international public health.

During the 20th century, public health authorities globally fought to eradicate seven major diseases: hookworm, yellow fever, malaria, yaws, smallpox, guinea worm and polio. Smallpox got off to a slow start, but with great will and determination, was effectively eradicated in 1977. Today, campaigns against polio continue, with the hope that it will become the second disease to be eradicated, with parts of Africa, Pakistan and Afghanistan remaining endemic.

More hope comes from the fact that 56.3% of the global population has received at least one dose of a COVID-19 vaccine, with more research ongoing to tweak vaccines as per mutants, and more funds being allocated for research into antiviral drugs. There is still a long way to go, but it appears that this tunnel too, albeit a little long, could have light at the end!