As previously reported by BioSpace, a group of scientists from The Babraham Institute in the United Kingdom was able to successfully rejuvenate skin cells by a full 30 years.

Study co-author Inês Milagre told BioSpace that the research process was a team effort. In Lead Author Wolf Reik’s lab, she was working on cell reprogramming while a colleague focused on the epigenetic clock.

Milagre came into her research career driven by an early interest in biology. “I was fascinated by biology all of my life. I had a very good biology teacher when I was in high school,” she said.

She explained that she was also a huge fan of the drama series The X-Files, seeing Gillian Anderson's character, Dana Scully, as a role model. “I thought that being a scientist must be very cool. This combination made me decide to go into biology.”

The research team’s original hypothesis came from knowing that “we can easily program cells to be zero years of age. No matter what age they are in the beginning, the cells normally reprogram back to embryonic age, or zero years of age.”

Though reprogrammed embryonic cells are free of gradual aging decline, they lack identity and thus function. The research team began to consider what would happen if they could get the cells to only partially rejuvenate.

“With embryonic cells, downstream applications can be a problem. We thought that maybe we could just rejuvenate the cells and then coax them back into being the cell of origin,” Milagre explained. At first, the idea was casually discussed over happy hour, but then the team found that preliminary experiments yielded promising results.

They utilized Yamanaka factors (Oct4, Sox2, Klf4, c-Myc), which are typically used to differentiate cells into the embryonic stem cell stage. “Instead of allowing the full time that it takes for cells to get to the embryonic life stage, we decided to stop the reprogramming process halfway through,” Milagre said.

“By doing this, we were able to get the cells to a younger age. They were easily reverted back to the original cell type, which in our case, were skin cells.” Pausing the process in the middle allowed the cells to become a younger version of the same cell type. The researchers named the novel method “maturation phase transient reprogramming” (MPTR).

“What I find very exciting about this study is that we showed that it's possible to rejuvenate cells,” she said. Though the Yamanaka factors have been used in other labs, the Babraham Institute team was the first to rejuvenate cells by a full 30 years. 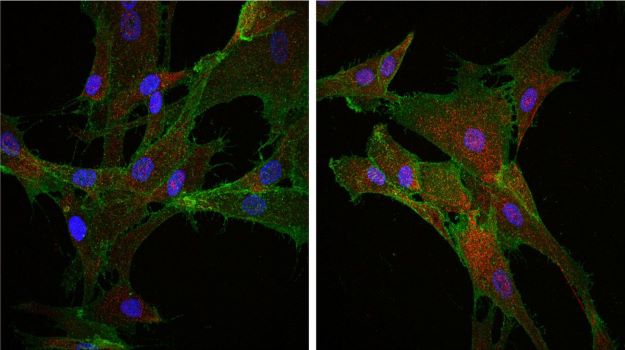 The scientists observed several benefits of the functionally younger cells. “The skin cells were better able to produce collagen, and they were responding better to wound healing sites,” Milagre said. The above photo depicts the collagen levels of the skin cells before and after rejuvenation. On the left are the original 53-year-old skin cells, and on the right are the reprogrammed cells. The collagen levels are depicted in red.

Milagre noted that the study is very preliminary, with much more research to be completed before the technology is safe and available. “We only tested this in skin cells, so we don't know if this is also possible in other cell types, though we believe that it probably is based on similar work from other groups.”

Another element that must be studied is how the technology will work without using the same viral vectors. “We need to make a safer technology to do this. As a proof of principle, we showed that it's possible to rejuvenate cells by 30 years. Now, we need to do more research to be able to eventually move this technology into a more clinical setting.”

Once the technology is safe and ready, Milagre noted that many downstream applications could be possible. “We can think about trying to tackle neurodegenerative and degenerative disorders as well as ameliorating some aging effects. If we can get cells to be functionally younger, even if we don't expand people’s lives, we might be able to give people a better quality of life.”

Reik explained in an earlier article that the findings could eventually lead to targeting specific genes that would be able to rejuvenate without any reprogramming. Milagre said that Yamanaka factors are working as pioneers that can start new gene expression programs. “If we understand which genes are being activated downstream, we can eventually think about modulating these genes. We can try switching on a minimum number of effector genes. This would be a way to overcome using viral vectors.”

Though potential future benefits of the findings are a long way off, the team is still considering the people they may help down the line. We hope the technology will help people live better lives without diseases, or without the consequences of a disease even if they still have it,” Milagre said.