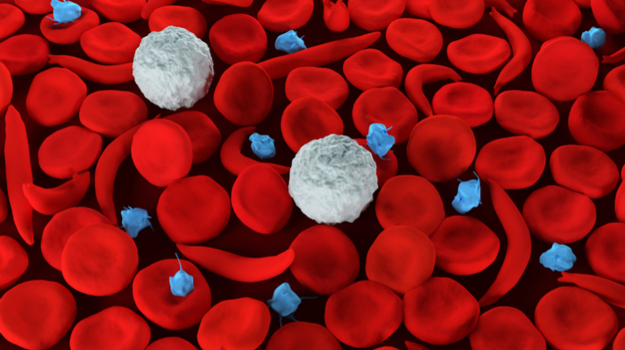 Red blood cells in sickle cell anemia, one of the conditions Aruvant Sciences looks to treat.

In what is sure to be a confusing choice of names, Roivant Sciences teamed with Cincinnati Children's Hospital Medical Center to launch Aruvant Sciences. Roivant is the umbrella company run by Vivek Ramaswamy, which has launched a number of companies with “vant” in the names, including, recently, Urovant Sciences, Inc.

Aruvant will focus on developing gene therapies for hematological conditions. Its lead candidate is RVT-1801, an investigational gene therapy for sickle cell disease and beta-thalassemia. The gene therapy involves inserting a modified fetal hemoglobin gene into autologous stem cells via a viral vector, with the intention of increasing the function of red blood cells.

According to a company spokesperson, the new company's name stems from the word "aruval", a type of sickle from southern India, tying into Aruvant's focus on sickle cell disease.

The two organizations also formed a new nonprofit foundation, the Roivant Foundation, which will work to improve access to medical care for patients with sickle cell disease in the developing world. Aruvant’s launch extends a partnership between Roivant and Innovation Ventures, Cincinnati Children’s commercialization arm, which began in early 2015.

RVT-1801 was developed in the laboratory of Punam Malik, director of the Cincinnati Comprehensive Sickle Cell Center at Cincinnati Children’s. A Phase I/II clinical trial in sickle cell disease patients is ongoing and preliminary results will be presented December 3 at the Annual Meeting and Exposition of the American Society of Hematology in San Diego.

“Treating sickle cell anemia and beta-thalassemia has been my passion since I first trained as a physician in India,” stated Malik. “I look forward to sharing important data next week at ASH on RVT-1801, which has been designed to improve patient experience and access through our RIC regimen. I am excited to work with the team at Roivant to rapidly advance the development of this potentially transformative therapy. A critical reason we chose to work with Roivant on this program was their authentic commitment to patients globally.”

Vivek Ramaswamy, founder and chief executive officer of Roivant, noted that he is a native of Cincinnati, and was “particularly excited about Roivant’s sustained partnership with Cincinnati Children’s, which dates back to our first year of operations.”

Roivant Pharma is a business unit of Roivant Sciences. Generally, Roivant’s business model is to acquire older assets from larger companies. In some cases, the drugs were abandoned by the selling company because they were deemed failures and Ramaswamy and his team feel they can be evaluated and developed for narrower or different indications.

For example, Urovant Sciences, which focuses on urological conditions, has a lead product candidate, vibegron. Urovant licensed the drug from Merck Sharp & Dohme. It was investigated in Phase IIb and a Japanese Phase III clinical trial in more than 2,600 overactive bladder (OAB) patients, meeting all primary and secondary efficacy endpoints compared to placebo.

The most notorious and spectacular failure was Axovant’s intepirdine. Axovant acquired the drug for $5 million from GlaxoSmithKline for Alzheimer’s disease. In September 2017, the drug crashed and burned in a Phase III clinical trial.

Although none of the “vant” companies have a product on the market yet, several appear to be much closer, which considering the company is only three or four years old, is quite an accomplishment. And one of its companies, Datavant, which focuses on data management for clinical trials, is already bringing in revenue.