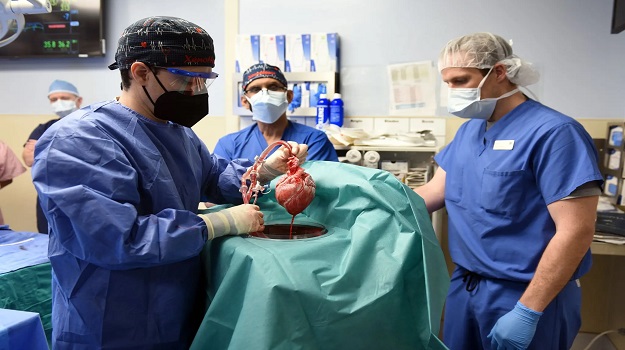 University of Maryland School of Medicine/EPA/Shutterstock

Two months after he received a gene-edited pig heart, David Bennett Sr. has died. He was 57.

Prior to the January surgery at the University of Maryland Medical Center, Bennett was living on borrowed time. His heart was rapidly failing, and he agreed to the experimental surgery as there were no other options to keep him alive. Cleared by the U.S. Food and Drug Administration through its “compassionate use program,” the surgery was performed and, for two months, his condition appeared to improve.

The hospital said that, following surgery, the transplanted heart performed well for several weeks without any signs of rejection. Bennett spent time with his family and participated in physical therapy to help regain strength. He watched the Super Bowl with his physical therapist and spoke often about wanting to get home to his dog Lucky, the hospital said.

However, over the past several days, Bennett’s condition began to worsen, and he eventually succumbed.

The hospital has not provided information regarding Bennett’s condition and what caused his death. It is unknown if he began to reject the pig heart, which had been genetically engineered to minimize the chances, or if other issues were at play. In a statement issued this morning, the hospital said that after it was clear Bennett would not recover, he was provided with compassionate palliative care.

“We are devastated by the loss of Mr. Bennett. Mr. Bennett became known by millions of people around the world for his courage and steadfast will to live. He proved to be a brave and noble patient who fought all the way to the end,” Bartley P. Griffith, M.D. the surgeon who transplanted the pig heart into Bennett said in a statement.

Organ transplantations are tricky at best. For patients, they require a lifetime of immune suppression medications in order to prevent the body from rejecting the organs. There are more people in need of organ transplants than there are available donors, and researchers have turned to animal organs to determine the potential in order to answer this need.

Muhammad M. Mohiuddin, M.D., scientific director of the Cardiac Xenotransplantation Program at the University of Maryland School of Medicine, expressed gratitude to Bennett for his “unique and historic role” in expanding the knowledge of xenotransplantation.

“We have gained invaluable insights learning that the genetically modified pig heart can function well within the human body while the immune system is adequately suppressed,” Mohiuddin said. “We remain optimistic and plan on continuing our work in future clinical trials.”

The porcine heart was genetically altered by Revivicor, a company owned by Maryland-based United Therapeutics. As BioSpace reported at the time of the surgery, the pig underwent the genetic modifications prior to birth. Before it was born, the pig had 10 genes modified in order to make it a candidate for a potential heart transplant. Three genes that were likely to trigger a human immune response that would reject the heart were “turned off.” Also, six human genes were added to the pig in order to prevent blood from coagulating in the heart, improve compatibility and further reduce rejection.

Although Bennett succumbed, xenotransplantation, the process of using animal organs to replace humans, continues to be explored. Days after Bennett first received the pig heart, United Therapeutics highlighted research conducted at the University of Alabama at Birmingham that led to the transplant of two pig kidneys the company genetically altered into a brain-dead human in order to assess the probability of success. According to UAB, at the time of the procedure, the transplanted kidneys filtered blood, produced urine and, even more importantly, were not rejected by the host.