Clearing Up a Misconception: COVID-19 Vaccines and Infertility/Pregnancy Loss 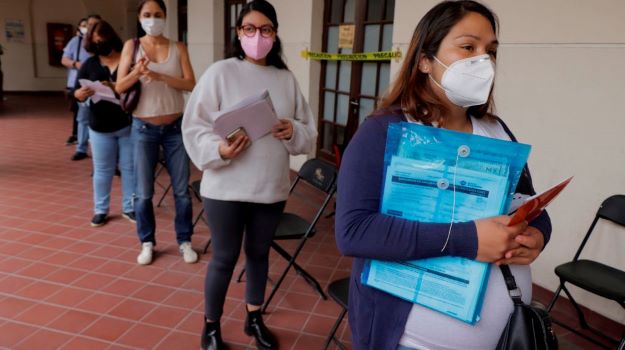 A group of pregnant women inside the facilities of the Benito Juarez Elementary School, located in Mexico City, before being immunized with the first dose of the Pfizer-BioNTech COVID-19 vaccine. (Gerardo Vieyra/NurPhoto via Getty Images)

With the varying and often changing guidelines about COVID-19 vaccines, one could be forgiven for believing the recent rumors running rampant on social media proclaiming that the inoculations can cause infertility or harm an existing pregnancy. The good news is that reputable scientific sources continue to debunk this concern.

The misconception was born in December 2020 when a German doctor and epidemiologist named Wolfgang Wodarg, along with an unnamed former Pfizer employee, went to the European Medicines Agency and requested that the regulator delay the approval of the Pfizer/BioNTech vaccine.

Central to the pair’s concern was the Syncytin-1 protein, which helps keep the placenta attached to the uterus during pregnancy. This protein just happens to share similar genetic instructions with part of the now-infamous spike protein of the SARS-CoV-2 virus. They posited that the antibodies triggered against this spike protein may also apply to Syncytin-1, and therefore might also cause the body to attack and reject a protein in the human placenta, causing infertility.

Since then, the claim has been propagated across social media channels in what the Mayo Clinic has called a “sophisticated disinformation campaign.”

But, Dr. Jeffrey Goldstein, assistant professor of pathology at Northwestern University Feinberg School of Medicine, said that this cause-and-effect pattern is anything but a perfect match.

The results of a study published Tuesday in the journal Obstetrics & Gynecology by Goldstein and his colleagues at Northwestern and Ann and Robert H. Lurie Children's Hospital of Chicago, largely contradict the notion that there is any risk to the placenta associated with COVID-19 vaccines.

The team focused on the placenta because it is the first organ to form after conception and a good indicator that something might be going wrong.

The study compared the placentas of 84 women inoculated in the late second or third trimester with the Moderna or Pfizer mRNA vaccines to those of 116 unvaccinated women who delivered at Prentice Women's Hospital in Chicago. The results demonstrated no increased incidence of decidual arteriopathy, fetal vascular malperfusion, or low-grade chronic villitis in the vaccinated women.

Goldstein explained that chronic villitis is a condition where internal T-cells attack the placenta causing inflammation and a potential miscarriage.

Another study, published recently in the New England Journal of Medicine, also demonstrated no obvious safety signals among pregnant persons who received the mRNA vaccines.

“They see some miscarriages, but they see the baseline rate, the normal rate,” said Goldstein of the study which looked at 3958 participants enrolled in the v-safe pregnancy registry between December 14, 2020, and February 28, 2021.

Goldstein stated that a potential link between the vaccines and infertility was physically impossible to assess at this point, given that the only placentas available for study were those of women who were vaccinated in January or February and gave birth shortly afterward. This is, however, something that the team would like to study in the future.

“We want to look at patients who are vaccinated in the pre-conception period as well, partially to look at if we see evidence of placental injury at delivery from women vaccinated at that point,” said Goldstein. “We also want to look at immunity. Do we develop a good antibody response, do we see the antibodies in the fetus?”

The placenta is a nest of nourishment for a developing fetus, providing oxygen and nutrients to the fetus. It also imbues the fetus with antibodies at the end of the pregnancy that can protect the baby after it is born.

The American College of Obstetricians and Gynecologists (ACOG) issued a statement in February aiming to allay concerns related to both pregnancy and infertility.

Likely helping to ignite the concern is the fact that pregnant women were excluded from the clinical trials leading to the emergency use authorization (EUA) of the currently approved COVID-19 vaccines.

However, Goldstein explained that this is the case with most vaccines, partly because pregnant women present a data problem for investigators.

“It is routine for pregnant women to be excluded from clinical trials for diseases that are not specific to them. From a purely data perspective, pregnant women are very troublesome. Their weight goes up and down and pregnancy does crazy things to the liver,” he said.

Investigators also exercise an advanced level of caution when it comes to pregnant women.

“They present somewhere between an ethical and a liability problem. If you give pregnant women a drug and then they have miscarriages or they have malformations, then you’re potentially on the hook,” said Goldstein.

Last May, Goldstein’s team looked at the effect of COVID-19 itself on pregnant women. This research indicated that the risks of contracting the disease outweigh any potential harm from the vaccines.

“We saw something called decidual arteriopathy, which is injury to the blood vessels. That can be associated with preeclampsia and growth restriction. There really does seem to be an increased risk of hospitalization, of severe disease in pregnant women,” said Goldstein. “The disease risk for adults is real, the disease risk for pregnant women appears to be increased, and the risk for vaccination is not really there.”