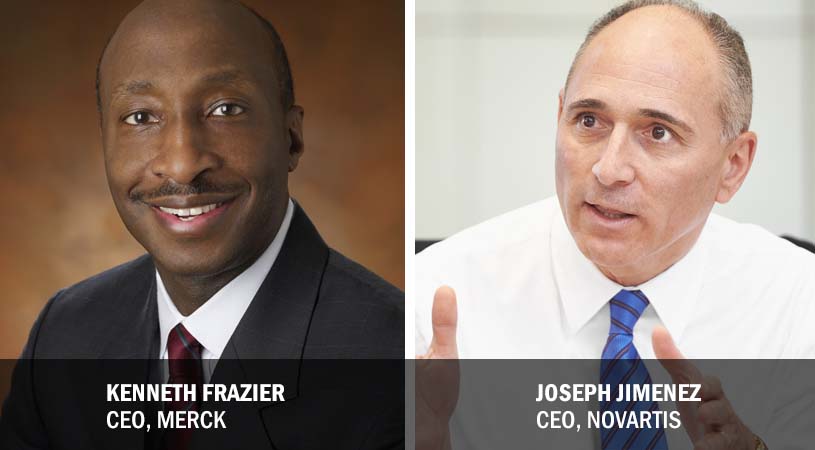 With many biopharma companies reporting their third-quarter financials, there’s often an inevitable question—What’s your merger-and-acquisition strategy? Both Merck and Novartis faced this question. Here’s what their chief executives had to say.

Merck reported third-quarter sales of $10.5 billion, up 5 percent from the same period last year. A lot of attention was paid to Keytruda, whose third-quarter sales were $356 million, up from $159 million in last year’s third quarter. And the drug is continuing to be approved for additional indications, including two supplemental Biologics License Applications (sBLA) in lung cancer, and positive data for the drug with chemotherapy as a first-line treatment in metastatic non-squamous NSCLC regardless of PD-L1 expression.

Keytruda is involved in 360 different clinical trials, with 200 of them combination studies.

So it’s understandable if the company is focusing on exploiting Keytruda, rather than spending a lot of time on mergers, large or small. It hasn’t really focused much on large acquisitions recently anyway. Those deals included an acquisition of Afferent for $500 million down and $750 million in potential milestones, and the acquisition of UK-based IOmet for an undisclosed amount.

So at the third-quarter conference calls, when Merck’s chief executive officer, Ken Frazier, was asked about its plans for mergers and acquisitions, he said, “So I said that it remains an important priority, and you should know we’re actively engaged and looking for ways of augmenting our pipeline. And in so doing, it’s important to remember that we are not limited by size or by phase. We’re going to continue to look for the best partnerships and collaborations. But fundamentally, we’re looking for bolt-on opportunities as a company.”

For Novartis , third-quarter net sales were down 1 percent, with core operating income down 3 percent. Net income, on the other hand, was up 7 percent from higher operating income and income from associated companies.

“Novartis delivered a solid Q3 despite the Gleevec generic impact in the U.S., due to the strong performance of our Growth Products,” Joseph Jiminez, Novartis’ chief executive officer, said in a statement. “We continue to drive innovation, with positive pipeline readouts for LEE011 in advanced breast cancer, BAF312 in SPMS and AMG 334 in episodic migraine. We are continuing to invest for the future, as we manage the Gleevec loss of exclusivity in 2016 and 2017.”

At the third-quarter conference call, when asked about its merger-and-acquisitions strategy by Citigroup analyst Andrew Baum, Jiminez said, “Look, we have been pretty clear that bolt-on strategy is really where we are focused at this point, that is … we won’t do large-scale, but it would have to be very, very attractive for Novartis shareholders, if we did. Right now, we’re focused on bolt-on and I think if you look at our pipeline, if you look at the underlying growth of this company, as soon as we get through 2017, which will be the final year of the Gleevec patent expiration in Europe, the true growth rate of this company is going to come through in 2017—in 2018, 2019 and 2020.”

So bolt-on acquisitions appears to be the thought of the day.

Carroll writes, “Did I say megamergers are out? I probably shouldn’t have to at this stage. But count Merck and Novartis out.”