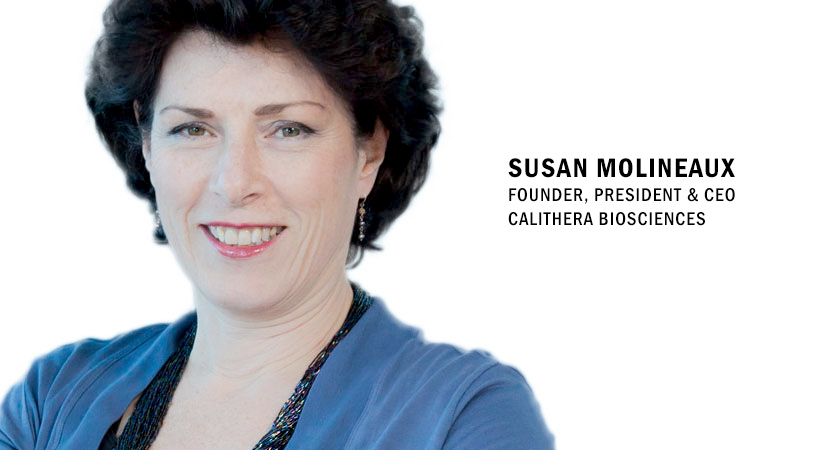 Susan Molineaux, president and chief executive officer of South San Francisco-based Calithera Biosciences  , told the San Francisco Business times, “The CEO job in biotech always involves raising money. You have to raise a great deal of money without having a product.”

Calithera and Molineaux seem to be doing reasonably well at that. The company’s third-quarter financial report on November 9, showed the company has about $56.2 million in cash, cash equivalents and investments. Operating expenses for the third-quarter were $8.632 million, and showed a net loss of $8.544.

San Francisco Business Times wrote, “In the case of Calithera, the math goes something like this: Investors poured $105 million into the upstart’s coffers between when Molineaux founded the company in 2010 and its 2014 IPO last year. The company spent $23.7 million on research and development and reported a $32.6 million loss from operations, with $72 million in cash, equivalents and other investments in hand.”

But the company, which focuses on immuno-oncology, has something to show for it. Calithera has CB-839 in a Phase I/II clinical trial in combination with Opdivo to treat renal cell carcinoma, malignant melanoma and non-small cell lung cancer. The company recently presented data for the drug in renal cancer and in triple negative breast cancer. Its CB-1158 has begun a Phase I trial for advanced solid tumors.

“During the third quarter, we continued enrolling the two cohorts evaluating our glutaminase inhibitor CB-839 in triple negative breast cancer and in renal cell carcinoma,” Molineaux said in a statement. “We expect to be in a position to provide additional updates at medical meetings in the fourth quarter. In addition, we opened two new immuno-oncology trials in the quarter, both of which should have an initial read out in 2017.”

Molinaux has a doctorate in molecular biology and started her career in drug development at Merck (MRK).

Duncan Independent noted, “Reaching the $2.90 mark after recent trade, the shares of Calithera Biosciences are getting a serious look from investors after the price moved 5.45 percent.”

San Francisco Times says, “Molineaux founded Calithera as an opportunity to build a new team from the ground up. Bringing in talent from past endeavors and enticing new recruits with opportunities to shape a new product was a major focus.”

The company’s senior vice president of research, Mark Bennett, notes, “She’s honest and clear with the business community about what we know and what we don’t know.” And that from the perspective of both a scientist and executive, her understanding that “the science is the business” is a real advantage.