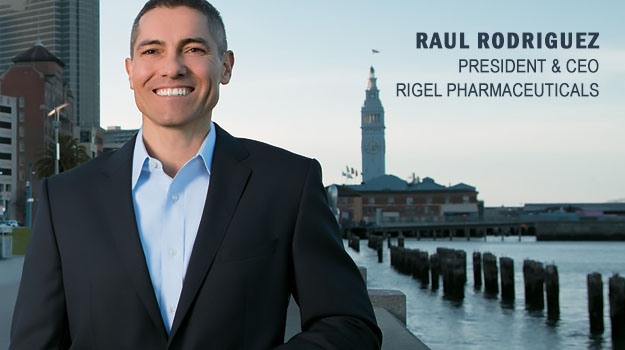 The first half of 2018 will be pivotal for Bay Area-based Rigel Pharmaceuticals, Inc. as the company awaits regulatory approval for its rare blood disorder drug and builds out the internal infrastructure to commercialize the product.

The U.S. Food and Drug Administration is set to rule on Tavalisse (fostamatinib disodium), an oral spleen tyrosine kinase (SYK) inhibitor, for adult patients with chronic or persistent immune thrombocytopenia (ITP) on April 17. ITP is a rare autoimmune disorder that affects about 65,000 people in the United States. The disease attacks and destroys the body's own blood platelets, which play an active role in blood clotting and healing. Rigel filed its New Drug Application in the spring of 2017 based on Phase III data that showed patients treated with the drug achieved a prospectively defined stable platelet response.

“This is a very exciting time for us,” Rigel Chief Executive Officer Raul Rodriguez told BioSpace in an exclusive interview.

Rigel has been working with fostamatinib for more than a decade and despite some setbacks, including a 2016 failure in adult chronic/persistent immune thrombocytopenia and rheumatoid arthritis, Rodriguez said being this close to possible approval is “monumental.”

“We’ve had to recover some and show some grit, but when you have failures and stumbles, it behooves you to go forward,” Rodriguez said.

Rodriguez said that if Tavalisse is approved by the FDA, the company plans to have the product available for patients by the summer. If all goes well with the FDA, Rodriguez said Rigel will treat ASCO (American Society of Clinical Oncology) in the summer as a “coming out party” for Tavalisse.

To facilitate a successful launch Rodriguez said the company has been putting together a commercial team of about 50 people, the majority of whom are sales reps. The company is building a distribution system of specialty pharmacies to get the drug in the hands of patients, Rodriguez said.

“It would be great to have patients begin to benefit with all the work we’ve done over the past 10 years. It will be incredibly gratifying,” he said.

In addition to chronic or persistent ITP, Rigel is also studying the effects of Tavalisse on patients with autoimmune hemolytic anemia (AIHA), a disorder similar to ITP, but where antibodies attack red blood cells rather than platelets. There is no FDA approved treatment for the approximately 40,000 patients in the U.S. with this disease, Rodriguez said. In a small trial of 17 patients with AIHA, about 47 percent had positive results with Tavalisse. Rodriguez called it a potential game-changer for improving the quality of life for those patients.

Rigel is also anticipating Phase II results from a Tavalisse for patients with IgA nephropathy, an autoimmune disease that can prevent the kidney from filtering waste from the body’s blood. Data is expected in late March or early April.

“There’s nothing approved for this and we hope to show a benefit with fostamatinib at a higher dose,” Rodriguez said.

Not only did Rodriguez use last week’s J.P. Morgan conference setting to showcase Rigel’s pipeline, but he is also actively seeking a candidate to fill the company’s empty chief financial officer position. In December, Rigel’s then-CFO Ryan Maynard announced he was leaving the company at the end of the year. While Nelson Cabatuan, Rigel's vice president of finance is temporarily filling the spot, Rodriguez said he is interviewing candidates. Rodriguez said he is looking to hire a CFO with commercial experience prior to commercial launch of Tavalisse as it will be critical for the company to have someone in this position when the company gets a drug on the market.

“You know, the thing about J.P. Morgan is every single CFO candidate with commercial experience is sitting within four blocks of where I’m sitting,” Rodriguez said. He added that over the course of the week-long conference he had multiple interviews with candidates and hopes to fill the position within the next three months.