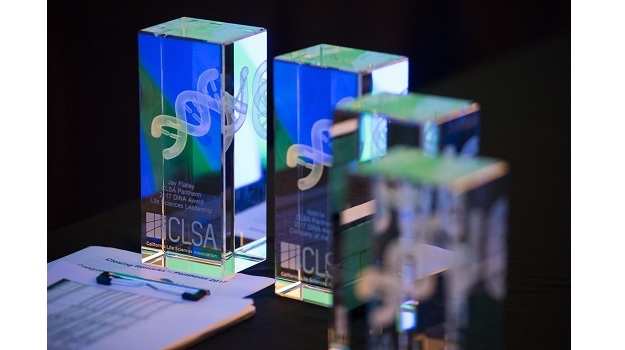 Bristol-Myers Squibb, Nektar Therapeutics, Amgen and others will be recognized for their significant contributions to the California life sciences industry during the November 2018 Pantheon DiNA Awards hosted by the California Life Sciences Association.

In announcing the winners of the DiNA awards, CLSA, the trade association representing California’s life sciences industry, pointed to several key events that occurred over the past year highlighting some of the significant moments that took place over the past year. Awards will celebrate the state’s life science industry for things like deal-making, leadership, being an up-and-coming company and outstanding products.

The “Deal of the Year” award goes to Bristol-Myers Squibb and the Bay Area’s Nektar Therapeutics. In February BMS and Nektar forged a deal worth up to $3.6 billion to develop and commercialize Nektar’s lead immuno-oncology program, NKTR-214. The two companies will combine NKTR-214 with BMS’ Opdivo and Yervoy to target nine tumor types in more than 20 indications that include melanoma, renal cell carcinoma, non-small cell lung cancer, bladder and triple negative breast cancer. CLSA called the deal a record-breaker, being the largest biotech licensing fee in history. The organization said the terms of the agreement give Nektar the lion’s share of NKTR-214 profits and leaves it some freedom to develop the drug in combination with other assets.

CLSA named South San Francisco-based Cortexyme as the recipient of its “Rising Star” award. Cortexyme is developing its lead asset COR388 as a potential treatment for Alzheimer’s disease. COR388 is a first-in-class, oral bacterial protease inhibitor that targets a specific pathogen discovered in the brains of patients with Alzheimer’s. In May Cortexyme, a former JLabs company, secured $76 million in financing to advance its study of COR388 from investors that include vaunted pharma names like Pfizer, Takeda and Verily Life Sciences.

California-based Amgen is getting some love at the awards for its migraine medication Aimovig, which was approved by the U.S. Food and Drug Administration (FDA) in May. Aimovig, which was co-developed by Swiss-based Novartis, is being given the “Outstanding Product, Therapeutic” award. Aimovig is the first FDA-approved treatment to block the calcitonin gene-related peptide receptor (CGRP-R), which plays an important role in migraines. The migraine medication was approved based on stunning Phase III data that showed Aimovig reduced monthly migraine attacks in half. Aimovig is self-administered once per month via Amgen’s SureClick autoinjector.

Also during the 15th Annual Pantheon DiNA Awards, California Life Sciences Association will honor two industry icons with “Life Science Leadership Awards.” CLSA will recognize Stelios Papadopoulos and George Scangos for their accomplishments in the state’s life science industry. Will Zasadny, the director of communications for CLSA, called Scangos, the CEO of Vir Biotechnology and the former CEO of Biogen, and Papadopoulos, the co-founder of Exelixis, Inc., as well as chairman of Biogen and Regulus Therapeutics, Inc., “industry titans” who have made lasting contributions to the life sciences sector.

“When you look back at the people who have received these awards over the years, it is people who have left an indelible mark on the life science industry in California,” Zasadny told BioSpace.

The awards are determined through a peer-reviewed committee process and then approved by the CLSA board of directors.

“The awards program is one night for the CLSA and our members to pause and recognize the individuals and companies who are making lasting contributions to the sector in California,” Zasadny told BioSpace. “It’s really a chance to reflect on the legacy the last year.”