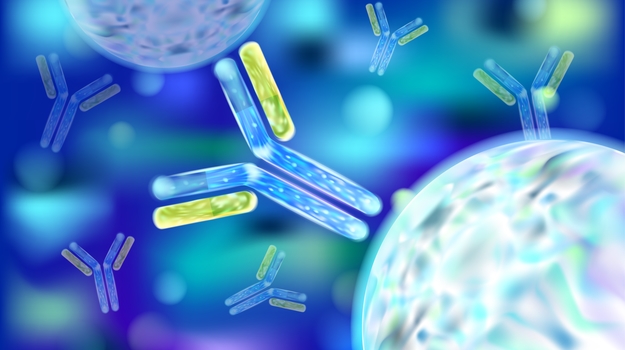 One of the possible treatments being investigated for COVID-19 is the use of convalescent antibodies. That is to say, finding patients who recovered from the disease, identifying antibodies against the SARS-CoV-2 virus, and using the plasma that contains the antibodies to treat the patients.

Researchers at Tsinghua University in Beijing, China have now successfully cloned antibodies from COVID-19 survivors. In lab tests, the antibodies prevented the virus from binding to its receptor on cells, meaning the antibodies would appear to have prevented the disease. Although promising, it’s still unclear if this would actually prevent infection in people.

They published their research in the journal Cellular and Molecular Immunology.

The research, led by Zhang Linqi, with colleagues at the 3rd People’s Hospital in Shenzhen, China, analyzed antibodies from the blood of recovered COVID-19 patients. They isolated 206 monoclonal antibodies that showed a “strong” affinity for binding with the viral proteins. They then tested them to see which ones prevented the virus from entering the cells.

Of the first of about 20 tested, four blocked viral entry, and out of them, two were “exceedingly good,” according to Zhang.

The researchers have partnered with Brii Biosciences, a China-U.S. biotech company, “to advance multiple candidates for prophylactic and therapeutic intervention,” according to a Brii statement.

“We have been able to move very quickly by virtue of our proximity to the initial outbreak and our expertise from prior research in SARS and MERS,” Linqi Zhang stated. “Our investigators have worked day and night since the beginning of the outbreak. With Brii Bio joining and the dedicated focus afforded by this new venture, we expect to accelerate our development efforts with the shared goal of bringing forward an effective therapy to benefit people around the world affected by this pandemic.”

The two antibodies with the most promise are 311mab-31B5 and 311mab-32D4. The researchers suggest they could eventually be used as “prophylactic and therapeutic agents.”

The practice of using cloned antibodies to treat illnesses is not new. It has been used to develop therapies for Ebola. This is slightly different than the use of convalescent plasma. In convalescent plasma, the antibody-filled blood plasma is given to patients who are fighting the disease. With this concept of cloned antibodies, the antibodies themselves are isolated, purified and used as a treatment or potentially as a preventative.

The research is still very early. Ben Cowling, an infectious disease specialist at Hong Kong University, told Reuters, “There’s a number of steps which will now need to be followed before it could be used as a treatment for coronavirus patients. But it’s really exciting to find these potential treatments, and then have a chance to test them out. Because if we can find more candidates, then eventually we’ll have better treatment.”